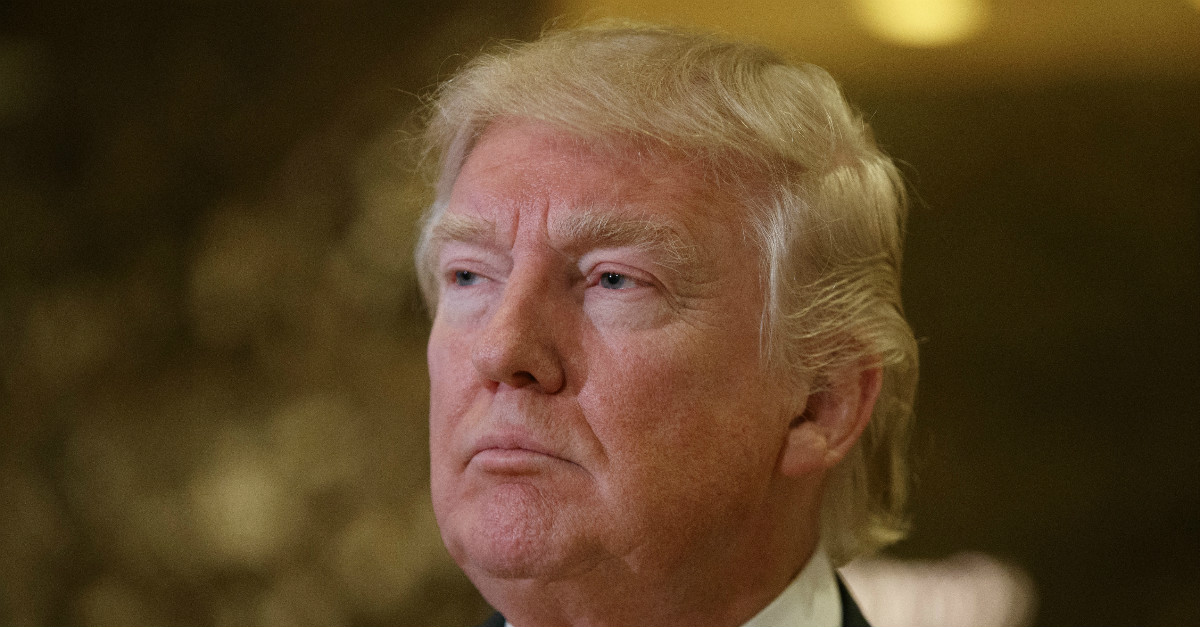 During the GOP primary race, Jeb Bush came under fire for his suggestion that the United States only admit refugees who can “prove” they are Christians.

“There are no Christian terrorists in the Middle East,” he said, but struggled to say exactly how the Christian refugees would be identified. “I mean, you can prove you’re a Christian,” Bush vaguely insisted. “I think you can prove it. [If] you can’t prove it, then, you know, you err on the side of caution.”

President Trump never took kindly to Jeb, a man to whom he gave the persistent and damaging label “low energy,” but he seems to have adopted some of Bush’s plan for handling would-be refugees.

Trump’s “extreme vetting” executive order, signed Friday, was accompanied by an interview with the Christian Broadcast Network in which Trump said his order will protect America from radical Islamic terrorism while making sure persecuted Mideast Christians will be safe.

“We are going to help [persecuted Christians],” Trump said. “They’ve been horribly treated. Do you know if you were a Christian in Syria it was impossible, at least very tough, to get into the United States? If you were a Muslim you could come in, but if you were a Christian, it was almost impossible and the reason that was so unfair, everybody was persecuted in all fairness, but they were chopping off the heads of everybody but more so the Christians. And I thought it was very, very unfair.”

As with much Trump says and does, this is a messy mix of good impulses, sheer nonsense, and outright dangerous ideas.

Let’s start with the good. Trump is right that Christians in the Middle East have suffered obscene persecution, and it is always good news when people who need refuge are able to get it more easily. To the extent that this executive order smooths the process for Christian refugees, it should be applauded.

Now, the nonsense. Trump is either lying or deeply misinformed in his claim that it was “almost impossible” for Christian refugees but easy for Muslims to get to the U.S. before his order.

Digging further into the Pew data, we find that on a 15-year scale, the truth is actually the opposite of what Trump said:

RELATED: Rep. Justin Amash: ?Not lawful to ban immigrants on basis of nationality?

And finally, the danger. As was widely noted back when Bush proposed his similar plan, you can’t actually “prove” who is and is not a Christian.

This is not just my opinion. It is not just an obvious practical consideration or a comment on our government’s competency or lack thereof.

No, this is literally what the Bible says: Only God knows every human heart. Only God can “prove” who is or isn’t right with him. Not me. Not you. Not Trump.

Of course, there are ways we can get a reasonably good idea of whether or not someone is a Christian. It isn’t reciting creeds or giving a testimony, which anyone can fake if they’re desperate to flee a warzone.

Jesus said people would recognize us as his followers by our love. But tell me: What federal form is going to make that assessment? What federal bureaucracy should be allowed to play God when the lives of innocent people, Christian and Muslim alike, are on the line?

Who gets to sit on the tribunal for this Inquisition? pic.twitter.com/yoeF1dThnN

Governments have tried to sort people before based on whether or not they’re Christians. It never turns out well. If Trump is serious about a compassionate, safe solution to the refugee crisis, he’ll abandon any religion-based vetting ideas immediately.