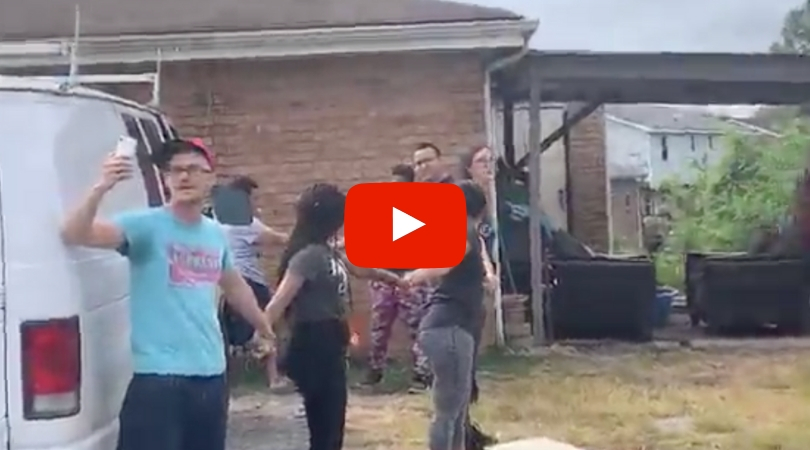 Residents in Hermitage, Tennessee, formed a literal human chain around their neighbors’ van to prevent Immigration and Customs Enforcement agents from taking them into custody. The man had entered a van with his 12-year-old son when an ICE vehicle blocked him in. Neighbors quickly came out to support them by bringing them gas, water, and wet rags so they could stay inside the van.

After four hours passed, neighbors created the chain to allow the father and son to run inside their home. The Facebook video was shared by Nashville Noticias, which provides information and news to Hispanic communities in the Nashville area. After ICE agents left, the neighbors once again formed a chain that helped the family get into the car, so they could quickly leave their home.

One of the neighbors, Stacey Farley, defended the family, stating, ?I could see if these people were bad criminals, but they?re not, they?re just trying to provide for their kids. The family doesn?t bother nobody, they work every day, they come home, the kids jump on their trampoline, it?s just a community.?

ICE agents had an administrative warrant for the family. While it does allow ICE to detain someone, it doesn’t allow them to forcibly remove someone from their vehicle or home. An administrative warrant isn’t the same as a judicial warrant which is why neighbors protected the family to stop ICE agents from harassing them and fear them into coming out. The neighbor’s human chain would not be considered an obstruction of justice.

Daniel Ayoadeyoon, a local lawyer later arrived at the residence to help, stated the two immigration officers were bullying the family inside their own vehicle, telling the father they were going to arrest him and his 12-year-old son. No ICE arrests were made that day.

ICE released a statement to WTVF which explained the attempt to detain the family, saying “conduct targeted enforcement of federal immigration law on a daily basis” is in accordance with their routing, ongoing operations.

ICE continues to focus its enforcement efforts on criminal offenders as nearly 90 percent of persons arrested for violation of federal immigration law during the past year also had either a prior criminal conviction or a pending criminal charge. ICE does not conduct any type of random or indiscriminate enforcement that would encounter persons indiscriminately.

Metro Nashville Police received a call about an attempted stop of a white Ford van by ICE, but police officers were instructed to be involved in the service of the detainer, rather stand by from a distance and keep the peace if necessary. It looks like ICE agents might have messed with the wrong community, that day.