Who is Paul Gosar, and why is he telling Capitol Police and the DOJ how to do their jobs? 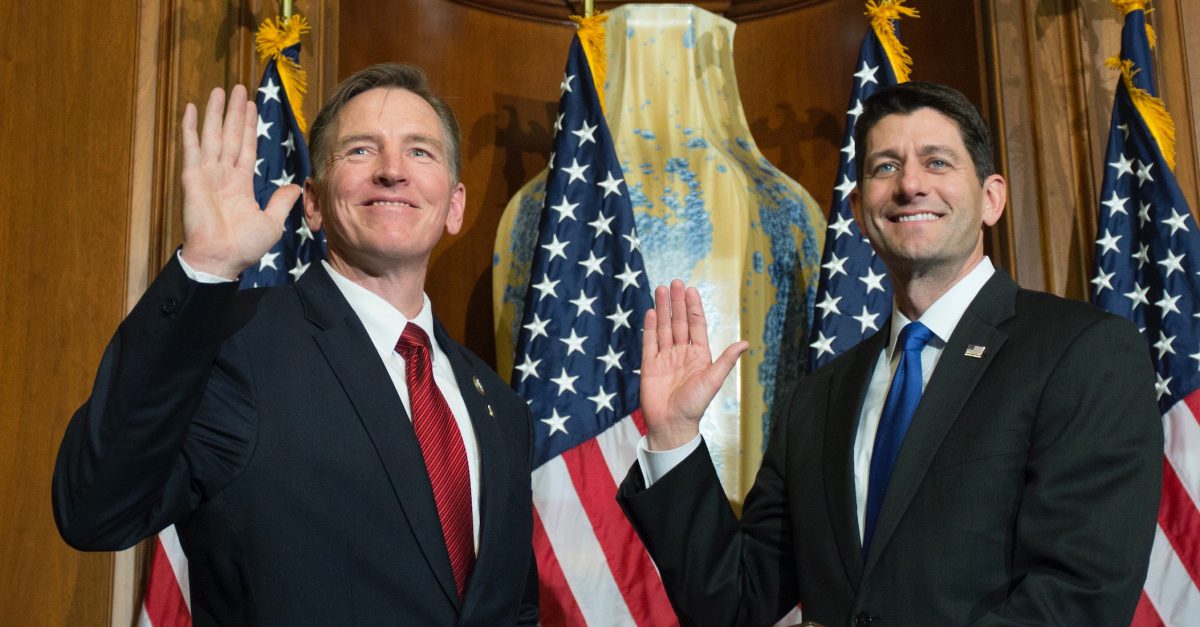 Ahead of the president’s first State of the Union, scheduled for tonight at 9:00 p.m. EST, Republican Congressman Paul Gosar tweeted about how he believes Dept. of Justice (DOJ) Attorney General Jeff Sessions and the United States Capitol Police (USCP) should do their jobs:

Today, Congressman Paul Gosar contacted the U.S. Capitol Police, as well as Attorney General Jeff Sessions, asking they consider checking identification of all attending the State of the Union address and arresting any illegal aliens in attendance.

“Of all the places where the Rule of Law needs to be enforced, it should be in the hallowed halls of Congress. Any illegal aliens attempting to go through security, under any pretext of invitation or otherwise, should be arrested and deported," said Congressman Gosar.

Gosar’s “suggestions” for authorities to arrest “any illegal aliens” in attendance comes as several members of the opposition party and a number of Supreme Court Justices invited to the joint-address of Congress announced their plans to skip this evening’s event.

Despite the potentially volatile scene later this evening, dozens of Democrats are reportedly still inviting children known as “Dreamers,” or guests legally protected under the Deferred Action for Childhood Arrivals (DACA) program.

However, this may not be possible for the president’s remaining SOTU addresses, as plans to keep DACA protections funded for future generations are uncertain at this time, as negotiations from earlier this year came to a halt surrounding demands related to President Trump’s promised border wall – terms Democratic leadership and negotiators refused to accept.

RELATED: Let’s make a deal: President Donald Trump’s deal for a border wall and DACA is here — here’s what we know

Representing Arizona’s Fourth District, which includes the state’s western city of Prescott, last year, Gosar said he believes there is much work to be done about the “lack of support for the Conservative reforms the American people voted for when they elected President Trump:”

.@RepGosar's Facebook announcement that he is seeking reelection and won't run for the Senate has been rewritten. No more mention of Flake. pic.twitter.com/UKDntK4vai

According to his website, the gluten-free dentist-turned immigration hawk and Freedom Caucus Member claims the “nearly 70,000 convicted criminal alien offenders into our communities” under President Obama’s Administration are still “very dangerous for the general public.”

Of course, not everyone in Congress agrees with Gosar’s methods of addressing these matters, including his own party leadership.

A spokesperson for House Speaker Paul Ryan (R-WI) reportedly confirmed such on the record this afternoon, saying her boss “does not agree” with Gosar’s latest Tweets:

Ryan spox @AshLeeStrong on Gosar call for Capitol Police to be on look out for Dreamers at SOTU: "The speaker clearly does not agree." per @FoxReports

Gosar’s fellow Arizona member Jeff Flake, who also represents the same constituency as the Congressman, tweeted some thoughts, as well:

This is why we can’t have nice things… https://t.co/2vLHDFvFgq

Rumors swirled last February that Gosar would campaign to make the move up from the House after Senator Jeff Flake announced his retirement, but the lower chamber incumbent said he is already working on signatures for his 2018 campaign “so that [he] can continue to represent rural Arizonans in the People’s House.”

RELATED: President Trump’s immigration orders are hitting some communities across the nation harder than others

Requests for more information from USCP officials, as well as Gosar’s press person went unreturned as of the time of this writing.

Authorities are practiced in arresting people protesting for or against immigration-related issues on the Hill, but it appears such a move to arrest an attendee of the SOTU for this or any other reason would be unprecedented.