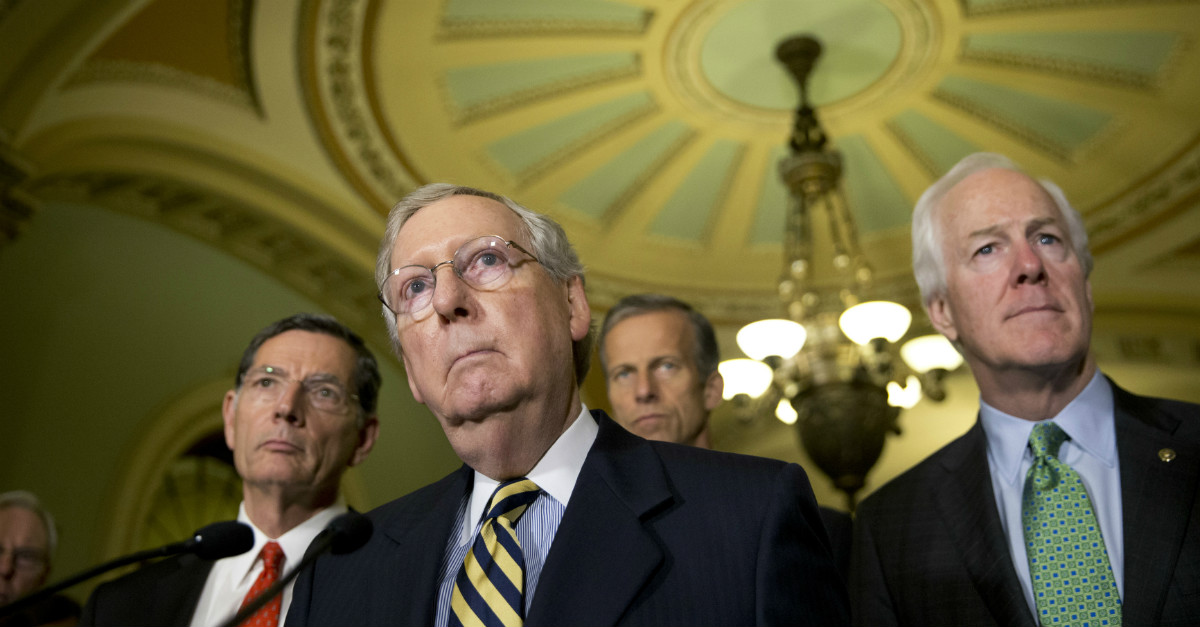 AP Photo/Alex Brandon
FILE - In tis June 21, 2016, file photo, Senate Majority Leader Mitch McConnell of Ky., accompanied by, from left, Sen. John Barrasso, R-Wyo., Sen. John Thune, R-S.D., and Senate Majority Whip John Cornyn of Texas, listen to a question during a news conference on Capitol Hill in Washington. Democrats opened a last-minute push Tuesday, Sept. 27, for new talks on must-do legislation to prevent the government from shutting down this weekend, fight the Zika virus and help flood-ravaged Louisiana rebuild. The aim is to see if Republicans will relent and add money to help Flint, Mich., with its water crisis — and get Capitol Hill off a collision course that could lead to a government shutdown this weekend. (AP Photo/Alex Brandon, File)

Health care is a hot-potato issue that sank Democrats’ majorities in Congress; now Republicans are risking the same fate. The GOP-controlled House passed the American Health Care Act (AHCA), a fix to the Democrats’ Affordable Care Act, a couple months back. The GOP-controlled Senate is now working on its own version of health reform.

The proposed AHCA has already run into some problems. The House version of the bill passed without a Congressional Budget Office score, and when CBO’s assessment eventually did emerge, it estimated that 23 million Americans would lose their health insurance, most of them on the Medicaid program. The CBO also found that older people would pay higher health insurance premiums than they do under current law.

However, the AHCA is also expected to shave nearly $120 billion off of the deficit in the long term.

Meanwhile the Office of the Chief Actuary of the federal Centers for Medicare and Medicaid Services has its own estimate of the bill. It believes only 13 million Americans would lose their health insurance under the AHCA. The office says 4 million more would be without coverage in their first year, many of whom would drop it voluntarily after the repeal of the individual mandate. But the actuary also says the AHCA would still increase both premium costs and out-of-pocket costs for the insured.

RELATED: Rand Paul: We should repeal Obamacare like Republicans promised, not just “fix” it

The truth is that, whichever of those estimates you trust more, the AHCA will never become law. President Donald Trump has called it “mean” and has promised that the Senate’s version will be more generous.

This has led some to fear that Senate Republicans will try to ram through their own version of the AHCA in secret. “The public will be lucky to examine the handiwork of an all-male group of Republican senators for three days before they try to ram it through,” writes Scott Lemieux in the Los Angeles Times. “Senate Majority Leader Mitch McConnell (R-Ky.) is running roughshod over basic democratic norms.”

Senate Republicans should acknowledge the criticisms of those who say the AHCA is being drafted without transparency and work to craft their bill in the sunlight.

For starters, they should hold open hearings on the legislation and allow both supporters and opponents to testify. As a matter of fact, they should take these hearings nationwide. Imagine seeking input in a country that’s set to have no health care providers in many of its exchanges next year. The response would be substantial and helpful.

RELATED: California shows why single-payer health care is not the answer

In addition to open hearings, Senate Republicans should also solicit the opinions of those in the health care industry. They should invite doctors, nurses, and others to town hall hearings and seek out their opinions.

Finally, Republicans should outline their objectives with the AHCA. Among them should be near-universal coverage at lower prices. They should then work towards those goals and explicate how the AHCA’s provisions will achieve them.

Republicans are making the mistake Democrats did with Obamacare: they are cooking it up in secret. They should come out into the open.