Rebelling against a rotten health care bill, the House Freedom Caucus comes into its own 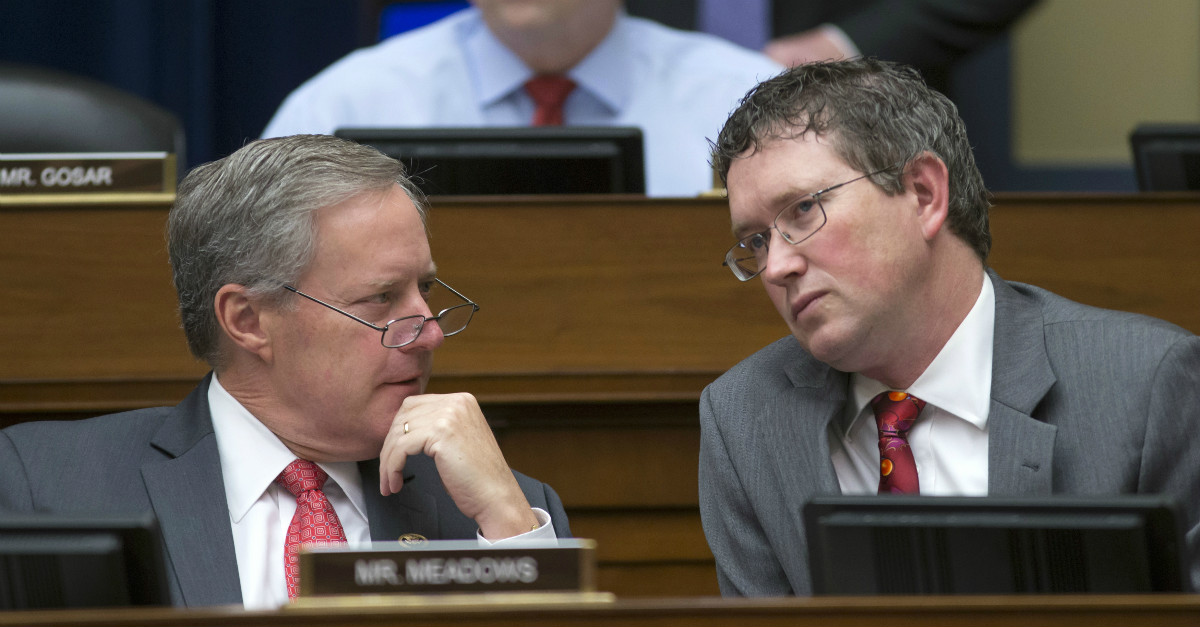 AP Photo/J. Scott Applewhite
House Oversight and Government Reform Committee members, from left, Rep. Mark Meadows, R-N.C., Rep. Scott DesJarlais, R-Tenn., and Rep. Thomas Massie, R-Ky., participate in the committee's hearing on Capitol Hill in Washington, Thursday, Dec. 17, 2015, to press Obama Administration officials on what safeguards are in place to ensure that would-be extremists are not exploiting a variety of legal paths to travel to the U.S.. At issue is how closely the U.S. government examines the background of people asking to come to the country, including reviews of their social media postings. (AP Photo/J. Scott Applewhite)

In the battle over Obamacare, the House Freedom Caucus seems to have finally found its moment. The small band of rebel conservative lawmakers’ raison d’être has never been clearer.

Both President Donald Trump and Vice President Mike Pence met Thursday morning with the Freedom Caucus ahead of the planned vote on the GOP’s Obamacare replacement plan, the American Health Care Act (AHCA). Republican leadership can only afford to lose 21 votes and still pass the legislation.

The 40-odd member Freedom Caucus has met with the administration dozens of times since the AHCA was rolled out. On Tuesday, in a closed-door meeting at the Capitol with House Republicans, the president told the group’s leader Congressman Mark Meadows to stand up. Trump then warned him that if he didn’t back the bill, “I’m coming after you.”

Those present were unsure whether this was a joke, probably because House Majority Whip Steve Scalise and other high-ranking members had already demanded that Republicans support the GOP health care bill – or else. It’s a serious threat, since over half the Freedom Caucus’ members come from deeply red districts.

In the era of Trump, the House Freedom Caucus could easily have lost its way. Founded in January 2015 by nine conservative lawmakers who felt the House Republican Study Committee had grown too large to be effective, the group caught the attention of the media when Meadows filed a motion to vacate then-speaker John Boehner’s chair. The only other time this tool was used was in 1910, when 42 progressive Republicans accused then-speaker Joseph Gurney Cannon of running the House like a tyrant.

RELATED: As the CBO report emerges, Ryancare is looking more like Obamacare by the day

At first glance, the soft-spoken Meadows did not seem like much of a rabble-rouser, and indeed he wrestled for months with the decision to file the motion. Boehner had earned the ire of conservatives by refusing to get serious about budget reform or the repeal of Obamacare. Instead of earning conservative members’ votes, he turned to Minority Leader Nancy Pelosi to pass spending bills and removed Freedom Caucus members who disagreed with him from their chairmanships. The National Republican Congressional Committee also funneled money into primary challengers against sitting caucus members.

The caucus has always struggled with clearly defining its mission. Under President Obama, they were bestowed with the unhelpful moniker “the caucus of no,” due to their seemingly inflexible and implacable opposition to bills that were thousands of pages long – “must pass” spending packages that GOP leadership would pull together with only days to review.

But now, with the help of Rand Paul in the Senate, the caucus is coming into its own.

This time, instead of merely standing against something, the Freedom Caucus is standing for what the Republican Party repeatedly promised constituents: a full repeal of Obamacare. It also helps that Paul, a physician from Kentucky, has another replacement bill in the Senate that could actually lower the cost of insurance by eliminating government mandates, giving people the freedom to purchase insurance across state lines, allowing customers to join voluntary larger insurance pools and a host of other free-market reforms.

These are all ideas Republicans publicly committed to before the election of President Trump. In fact, as recently as 15 months ago, Republicans in the House and Senate sent a bill to President Obama’s desk to totally repeal Obamacare. When Obama predictably vetoed the legislation, the GOP promised to finish the job if they won the presidency.

RELATED: The GOP’s Obamacare Lite will be a disaster for young people

Yet instead of the free-market reforms the GOP promised, Speaker Paul Ryan rolled out a bill that replaces the tax penalty of Obamacare with a permanent 30 percent surcharge for anyone who has a lapse in health care coverage. The bill also keeps tax credits (though it restructures them somewhat), maintains favoritism toward employee-based health care and keeps regulations and mandatory programs that have already begun causing the insurance markets to collapse.

Yet as President Trump personally lobbies House members on the Hill Thursday, his approval ratings are at an all-time low, particularly among his base, according to a new Quinnipiac University national poll. This gives Trump little leverage and his threat to primary conservative members little weight. The Freedom Caucus, once marginalized, now holds the whip hand.