The latest Republican health care plan unveiled by House leaders Monday is complicated, which has allowed its proponents to declare the plan genuine reform and others to condemn it as “Obamacare-lite.”

It is complex. But at least one part shouldn’t be confusing.

Right now Republican leaders plan on keeping the “individual mandate,” or the fine you would have to pay if you didn’t get insurance. The only difference now is that instead of paying the government, the money would instead go to insurance companies.

RELATED: Here’s what’s good and bad in the current Republican health care plan, and why it’s still not good enough

Here’s the language from the 2015 plan Congress passed from Speaker Paul Ryan’s congressional website (emphasis added): Obamacare, “cannot be fixed. Its knot of regulations, taxes, and mandates cannot be untangled. Obamacare must be fully repealed so we can start over and take a new approach.”

Keeping a mandate, or “surcharge” as they’re now calling it, is not exactly a new approach if you’re essentially retaining one of the most egregious parts of the Affordable Care Act.

“That means more choices, not more mandates,” the 2015 plan said.

Right now Speaker Ryan and his friends are saying that there will be no choice but to pay a fine if you choose to purchase health insurance after not having it for an extended period of time.

That’s not a choice; it’s a penalty—any way you cut it.

The Huffington Post’s Ryan Grim explains the relative insignificance of the difference between Obamacare and the new GOP plan as it relates to the mandate:

So the Republican plan doesn’t mandate buying coverage, but “penalizes anyone who chose not to do so.” That’s exactly what the current mandate does: Nobody is forced at gunpoint to buy insurance. They are perfectly free to choose not to do so and to pay a tax penalty instead. The only difference between former President Barack Obama’s plan and House Speaker Paul Ryan’s plan is that patients must pay their penalty directly to insurers rather than to the government.

In the 2008 presidential election, Barack Obama refused to support an individual mandate while his opponent Hillary Clinton did, even attacking Obama for not doing so. In 2009, President Obama changed his mind during the Affordable Care Act debate. It was a full flip-flop.

From 2009 onward most Republicans have blasted Obamacare and most specifically, the individual mandate. Today, in 2017, Republicans have apparently changed their minds about a penalty, which now puts the GOP significantly to the left of Barack Obama’s position in 2008.

That’s a flip-flop too. It’s also a win for Obama and the Democrats.

The Washington Examiner’s Phil Klein writes: “The argument is about whether the government should pay for it by forcing healthy people to purchase insurance under the threat of a penalty, as Obamacare does, or by threatening anybody who doesn’t maintain continuous coverage with a 30 percent late fee, as the GOP prefers.”

“Liberals, in other words” says Klein, “have won the central philosophical argument, and Republicans are reduced to fighting over the mechanics.” 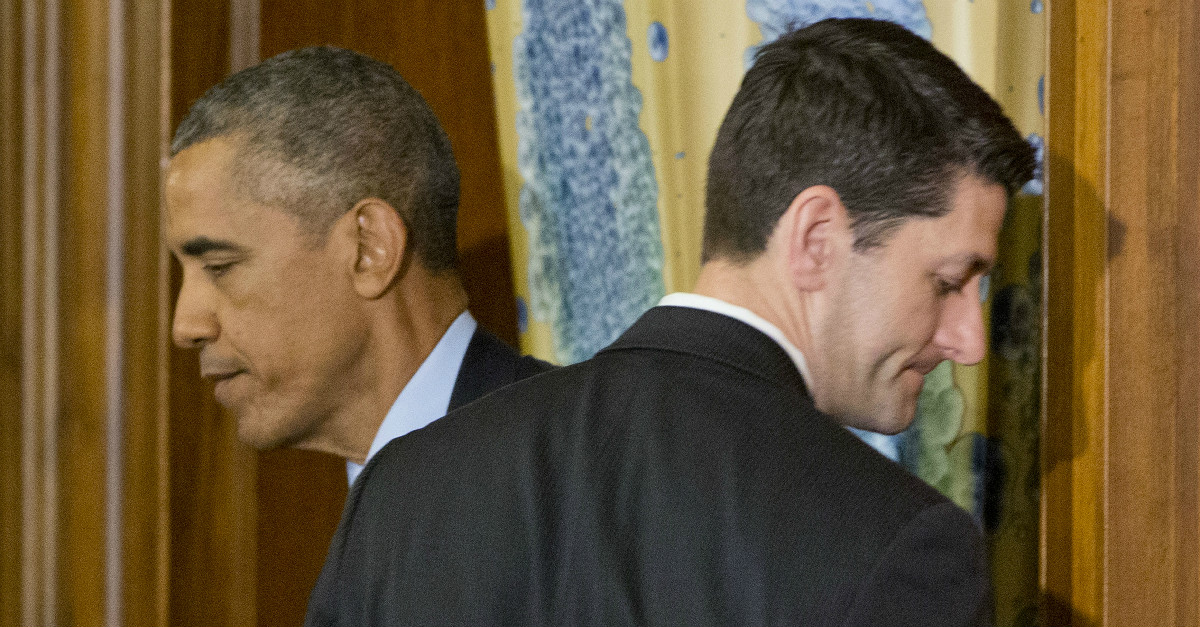