It is easy to dismiss all politicians as rotten because it’s usually true.

But not all of them are.

When I worked for Sen. Rand Paul a number of years ago, I had a mental list of the other members I would also work for without hesitation. In addition to Paul, it was Reps. Justin Amash of Michigan, Thomas Massie of Kentucky and Mark Sanford of South Carolina. A primary reason was that they were the most libertarian Republicans in Washington.

There were other Republicans I liked (and even a Democrat or two like Oregon Sen. Ron Wyden and Rep. Tulsi Gabbard of Hawaii). Sen. Mike Lee, and Congressmen Walter Jones, Mick Mulvaney (now President Trump’s budget director), Cynthia Lummis (retired) Jimmy Duncan, Raul Labrador and a few others would immediately come to mind.

But more importantly, in addition to being libertarians, I knew that Paul, Amash, Massie and Sanford were all in politics for the right reasons: To help create a more limited and constitutional government through policy.

None of these men are above “playing politics”—no politician can be; it’s an occupational necessity—but their strategies were always ultimately toward achieving policy goals or bending debates in their direction. The principle came first, the politics, second. For them, politics was a tool, but never an end.

For most politicians, it’s the exact opposite. The Obamacare repeal-and-replace debate is a prime example.

In 2015, every Republican but three in the House voted on a full repeal of Obamacare. Not a single Democrat voted to repeal. Even among the GOP dissenters, at least one said they were still for a full repeal. “If Congress fully repeals Obamacare, it must be fully prepared to replace it with a free-market alternative,” said Rep. Bruce Poliquin of Maine at the time.

What to replace the Affordable Care Act with is the heart of current debate.

But so is whether Republicans were ever serious about a full repeal. The 2015 vote was similar to prior votes in preceding years (there were 48 repeal attempts total) in which virtually every Republican swore to dismantle Obamacare completely.

But did they mean it? Were they just voting for a full repeal when they knew President Obama would never sign it?

Obamacare has helped some Americans and has hurt others. It’s complicated. But this was also true when so many Republicans also voted on a full repeal they knew wouldn’t pass. They didn’t have to think about a replacement because they knew President Obama would never get rid of his primary policy legacy.

But President Trump has vowed to repeal. The most conservative members of Congress are insisting on simply revisiting the 2015 legislation virtually every Republican already voted for.

But most still won’t go that far, and instead support the GOP establishment plan being touted by Paul Ryan contains significant parts of what Republicans wanted to get rid of in 2015, particularly the individual mandate.

So which Republicans were actually acting on principle in 2015? And who was just playing politics? No matter where you fall on the ideological spectrum, whether you like Obamacare or don’t, you can now tell who actually believed full repeal was good policy and who thought it was just good oppositional politics.

For eight years, Republicans have campaigned on, won congressional elections and now, even the presidency by vowing to repeal the Affordable Care Act. If the GOP had a bumper sticker slogan from 2009 forward, “Repeal Obamacare” would have been it.

RELATED: Rep. Justin Amash: GOP is “taking the Obamacare framework and trying to call it a Republican piece of legislation”

Paul, Amash, Massie and Sanford are still calling for a full repeal. I had no doubt they would. Paul and Sanford are also leading the effort to replace Obamacare with a free market-based alternative that has been endorsed by the conservative House Freedom Caucus. I’m not surprised these two Republicans are taking the lead on this front either.

I know where they’re coming from.

Most other Republicans? You just never know what they’re going to do, despite their rhetoric.

Republicans now control all three branches of government. If they can’t deliver the repeal they promised for year after year ad nauseam, they never had any real intention of doing so in the first place. 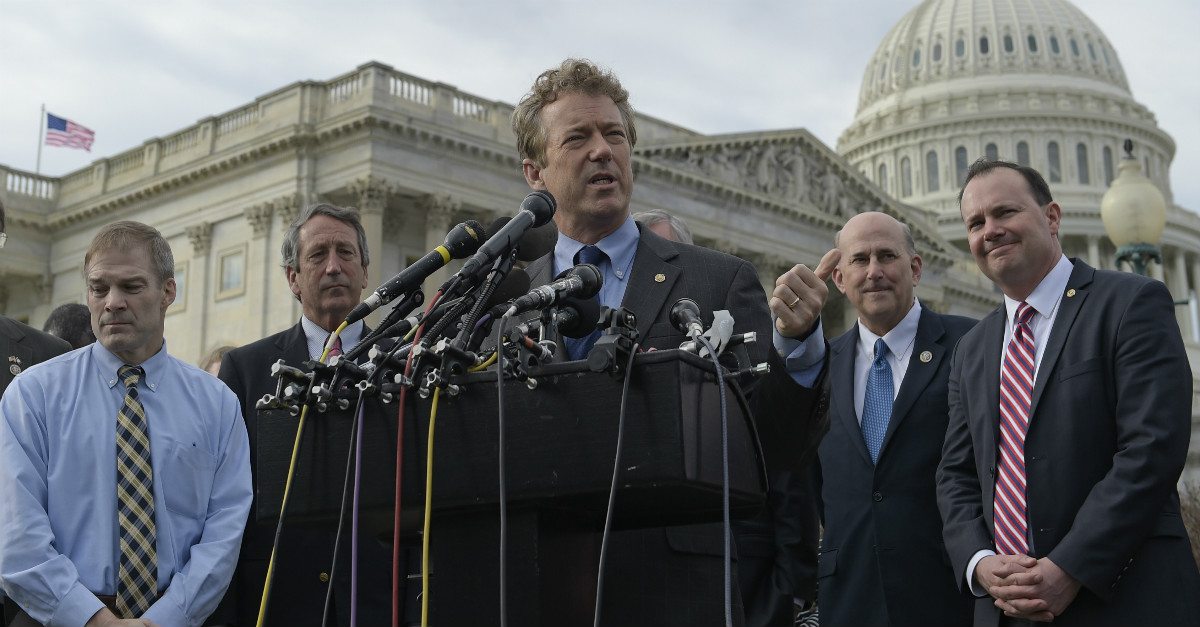