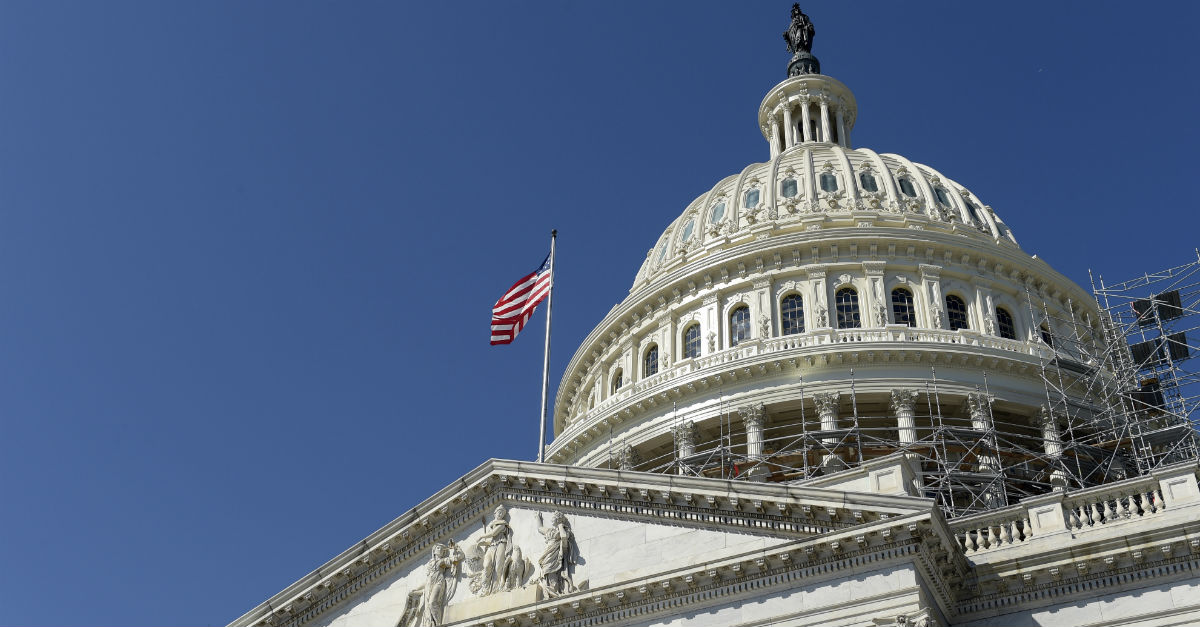 AP Photo/Susan Walsh, File
FILE - In this Tuesday, Sept. 6, 2016, file photo, an American flag flies over Capitol Hill in Washington. A group of six Gulf Arab countries expressed "deep concern" Monday over a bill passed by the U.S. Congress that would allow families of Sept. 11 victims to sue the government of Saudi Arabia over the attacks. (AP Photo/Susan Walsh, File)

Late this afternoon, the Freedom Caucus of the U.S. House of Representatives endorsed the GOP leadership’s latest plan to repeal and replace Obamacare. Dubbed “Trumpcare 3.0,” the plan would delegate to the states the decision of whether to repeal or keep in place many of Obamacare’s burdensome regulations.

While this may seem like a conservative solution in the spirit of states’ rights, in effect it is a cop-out designed to give Republican congressmen cover from the political fallout of what will inevitably be a disastrous law.

Introduced as an amendment to the American Health Care Act on Tuesday night by Rep. Tom MacArthur (R-N.J.), Trumpcare 3.0 keeps in place Obamacare’s protections for patients with preexisting conditions. It also allows states to opt-out of Obamacare’s community rating provisions, which bar insurance companies from charging sick people significantly higher premiums than healthy people, pushing them instead into high-risk pools subsidized by the federal government. It also allows states to opt out of Obamacare’s essential health benefits regulations requiring that insurance plans sold in state exchanges cover a laundry list of procedures that not everyone needs, like maternity care.

At first glance, these may seem like sensible solutions to drive down the cost of health care, at the very least for healthy people. It might not be so bad for the sick, either, if the federal government properly subsidizes high-risk pools.

But here’s the problem: Obamacare’s protections are popular among the public and could turn out to be a political third rail in many states that Republican state legislators can’t touch. The fight over Medicaid expansion foreshadows such a losing battle. When given the option to roll back Obamacare’s Medicaid expansion by the Supreme Court in 2012, 32 states just couldn’t resist the temptation to take Uncle Sam’s money ? among them, conservative strongholds like Arkansas, Iowa, Arizona and Kentucky.

It’s not hard to imagine a similar case unfolding with Trumpcare 3.0. If given the option to repeal Obamacare’s regulations, many Republican legislators will likely fold under pressure from moderate and progressive groups claiming they’re killing sick patients.

Remember the famous ad of Paul Ryan throwing granny off the cliff? Imagine attacks like that airing in across the states.

RELATED: Donald Trump shouldn?t shut down the government over his border wall

Our GOP Congress must roll up its sleeves and fully repeal and replace Obamacare before this madness ensues. There are plenty of better free market solutions that think tanks like the Cato Institute and Heritage Foundation have been pushing for years like allowing insurers to sell between state lines.

Trumpcare 3.0 as it stands is merely a way for Congress to deflect the blame when things go awry. I’m sorry to say that the American people are smarter than that. They will hold their legislators to account when and if they realize that the Republican uprising of 2016 did little to fix any of the country’s problems.

Republican congressmen should make sure that doesn’t happen by passing real reform. As I said before: go big or go home.