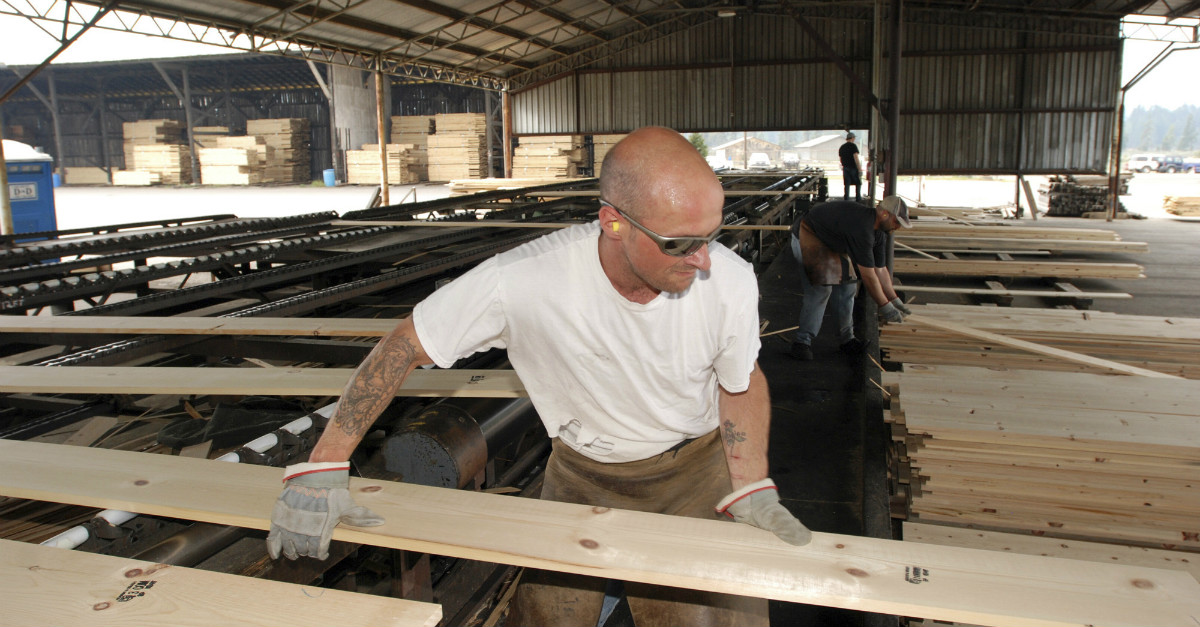 President Donald Trump has vowed to increase employment in American manufacturing. He says he believes foreign countries have been cheating the United States in trade. Hardly a Trump economic speech goes by without him praising the traditional protective tariffs that this country put in place during the 19th century and kept until before World War II. Trump is fond of quoting Abraham Lincoln’s admonition that “the abandonment of the protective policy by the American government will produce want and ruin among our people.”

The first tariffs Trump himself put in place targeted Canadian lumber exports to the United States. The U.S. and Canada have had a decades-long dispute over alleged Canadian subsidies of softwood lumber. The tariffs imposed were anywhere from 3 to 24 percent and were applied retroactively to the beginning of the year.

As predicted, lumber prices have skyrocketed. As Andrew Wilford at the American Spectator points out, foreign countries do not pay tariffs; American consumers do:

Back in April, President Trump slapped tariffs of around 20 percent on the Canadian softwood lumber industry. At the time, I wrote that it would cause lumber prices to rise, citing estimates that prices could increase by around 6.4 percent. Well, it turns out I was wrong, and lumber prices have not risen by around 6 or 7 percent. Instead, they’ve risen by much more since the spring — as much as 25 percent.

One contributing factor for this spike is not hard to see. Tariffs are taxes on the consumer, restricting the consumer’s options when purchasing a product. The levies make imported lumber more expensive, thus making American lumber a more attractive prospect for reasons not necessarily related to its quality or ease of procurement. It is not surprising that politically well-connected American companies, such as the U.S. Lumber Coalition, were strongly supportive of the import taxes. American lumber companies benefit, but at the expense of American lumber consumers that use the product as an input.

The higher lumber prices mean that fewer homes are being constructed. Eventually, that will cost jobs in the home building sector. I wrote back in April:

The tariffs are passed down to consumers in the form of higher prices. In this case, the cost of homes is expected to go up, which will mean that fewer homes are built. That means fewer jobs for construction workers and home and construction supply retail workers. Those who work in the construction industry are exactly the sorts of blue-collar voters that Trump appealed to in last year’s election.

Those in the industries tariffs are alleged to benefit — in this case, timber — are often more politically connected than those who are the unseen losers of protectionism. In this way, tariffs can be seen as yet another form of cronyism.

Now the Trump administration is considering another hike in tariffs, this time on foreign steel. Similar tariffs were imposed by President George W. Bush in 2002, and they went as high as 30 percent. Those tariffs were later rescinded in 2003.

During that time, the Bush tariffs were blamed for causing the losses of more jobs than were actually protected. The reason was that they raised the price of steel for manufacturers. Those costs had to be made up elsewhere, which was done either by laying off people or passing costs down to consumers, which decreased sales.

In the end, it is not politically connected industries or foreign countries that pay tariffs. It is always the American consumer. Donald Trump needs to give up his protectionist fantasies and brush up on economics.