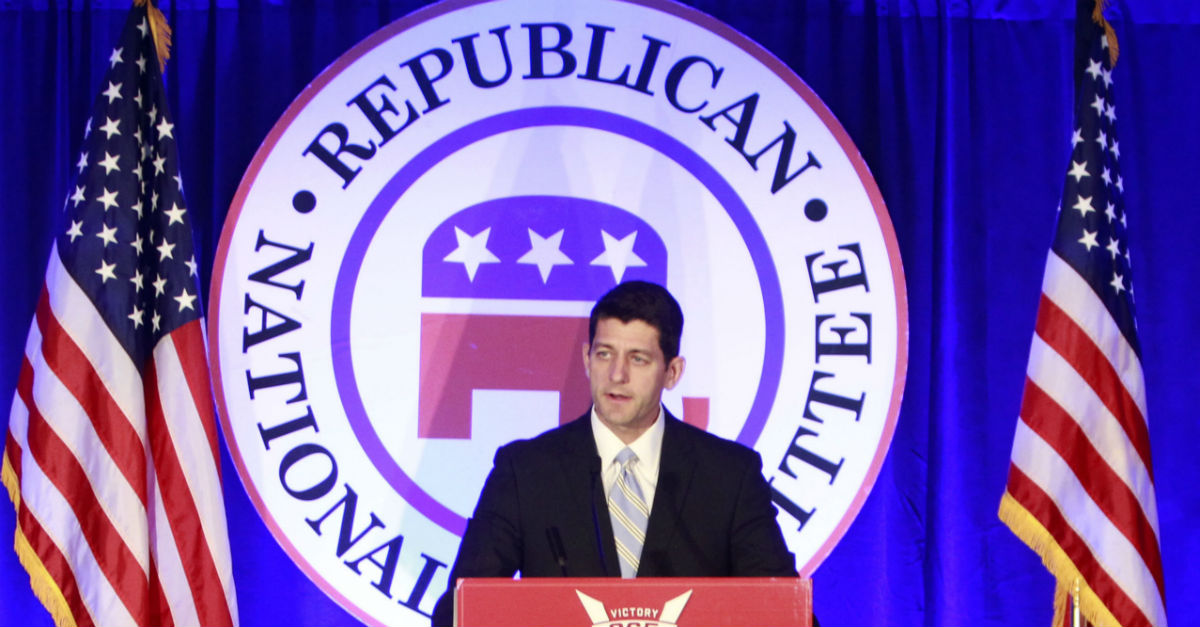 (AP Photo/Stacy Thacker)
U.S. Rep. Paul Ryan, R-Wis., speaks during the Republican National Committee summer meeting Friday, Aug. 8, 2014 in Chicago. The congressman says that Republicans must expand in under-represented voting groups. "We are in one of those trajectory-making moments where we will determine the kind of country we are going to be for at least a generation," Ryan said. (AP Photo/Stacy Thacker)

On Wednesday, the Republican National Committee released their fundraising statistics for November and claimed a record breaking month, pulling in $8.2 million.

With November’s numbers, the RNC has now raked in upwards of $121.4 million; a number that The Hill reports is the largest that the committee has ever netted in a non-election year. Even more, their earnings dwarf the money raised by the Democratic National Committee, who only raised $5.7 million in November and $62 million this year, per FEC filings.

RELATED: A new FEC complaint might bring federal charges for the DNC and the Clinton Campaign

For all of 2017, political junkies have watched as Republicans put a beating on Democrats’ wallets. It’s tough to break down exactly how this is happening, but the GOP has two all-stars that they trot out for donations — Donald Trump and Paul Ryan. The Wisconsin congressman is a money-making machine. In mid-October, Politico reported that Ryan brought in $39 million for his party. An aide put it most succinctly, noting that “Speaker Ryan has traveled to 30 states, nearly 65 cities, and has done almost 250 events on the road to help raise funds.” Almost half of the funds that the National Republican Congressional Committee brought in were thanks to the conservative icon.

As Bernie Sanders rode the wave of a grassroots movement during the 2016 election campaign, Donald Trump seemed to follow his lead, speaking to the same audience — the disenfranchised “forgotten men and women” that he later referenced in his inaugural address. His campaign brought in over $281 million from grassroots donors, per a Politico report. His small-dollar donations eclipsed those touted by Hillary Clinton. Like all politicians, Trump’s team constantly blasts out fundraising emails and while he bucked the party establishment at first, his decision to install former RNC chair Reince Priebus as White House Chief of Staff temporarily married him to the old guard. In a statement following their November success, RNC Chairwoman Ronna McDaniel said “as President Trump follows through on his campaign promises, our grassroots support continues to grow across the America.”

Dem strategist says the Democrats' messaging sounds like an “ad for a weekend furniture sale,” is "about as firm as Jell-O” and it’s not resonating with voters https://t.co/Du2RSifAx8 pic.twitter.com/YCqfzkbiaC

On the Democratic side, the progressives that lifted up Sanders have continued to turn away from the party’s big wigs. That has led to previously fringe groups bringing in money that goes towards progressive candidates. Progressives’ idea that the DNC has forsaken them was only cemented when Donna Brazile published her tell-all suggesting that the Democratic primary was “rigged” for Hillary Clinton.

The left side of the aisle continues to bring in funding, yet the cash flow to the DNC has been slightly choked off. In the Alabama senate race, Doug Jones outspent Roy Moore by a margin of roughly ten to one. But outside groups like Highway 31 dropped large donations into his war chest. The RNC cut ties with Moore after the pedophilia allegations against him became public, before quietly walking that back in the days before Alabamians went to the ballot box.

Progressive political action committees like MoveOn.org (which was founded to oppose the impeachment of Bill Clinton) and Indivisible continue to pull in big numbers as some Democrats continue to turn away from the establishment. But as the 2018 elections loom, the rubber will soon meet the road and with so many players working to elect candidates on the left side of the aisle, the GOP may benefit from the unity of their bank account.