It was Steve Bannon’s ego, not the establishment, that wounded his political “revolution” 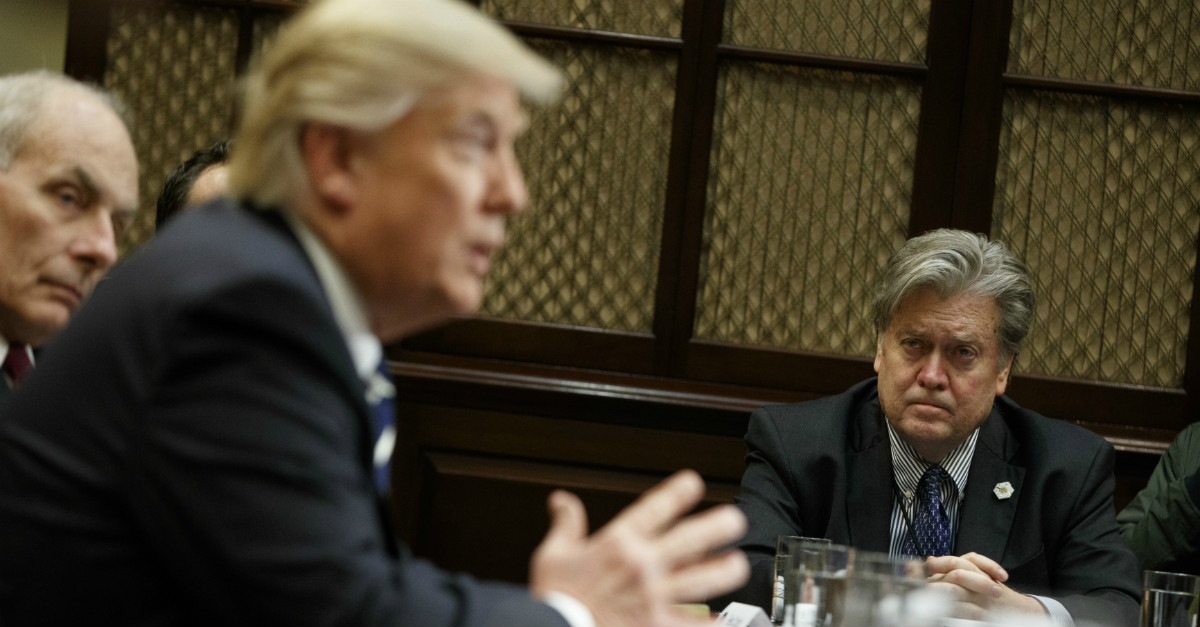 The first three or four months in the White House were quite good for Steve Bannon. Every would-be political candidate who hoped to run against a Democrat or an establishment Republican incumbent never missed an opportunity to talk to Bannon and snap a selfie with him. They wanted his support, his endorsement, and the backing of the Breitbart machine.

The Breitbart chairman, camped out in the Breitbart Embassy on Capitol Hill, was being granted prime time interviews on Fox News and 60 Minutes where he eviscerated the GOP establishment, the swamp creatures who have lived in the Washington muck for decades, Mitch McConnell, Paul Ryan, the Bush family, the globalist kingpins whispering in President Trump?s ear, and anybody else who got in his way. When Roy Moore defeated the McConnell and Trump-backed Sen. Luther Strange in the Alabama Republican Senate primary, it looked as if Bannon?s insurgency against the GOP mainstream was more than the delusional act of grandeur that so many in Republican circles thought is was; perhaps it was the real thing.

Bannon has had a rough few months since then. Moore lost to Doug Jones in the general election, giving the Democrats their first Senate win in Alabama since 1992. McConnell groused about Bannon?s political genius costing the Republicans a seat in one of the reddest states in America. Moore?s defeat was Bannon?s defeat, but the overweight, disheveled, unshaven former White House chief strategist waved it off as one battle in a larger war. His critics, Bannon told Vanity Fair in a feature last month, don?t bother him in the least. ?You can call me anything you want. Do you think I give a shit? I literally don?t care.?

He certainly cares about what his critics say now.

After excerpts of author Michael Wolff?s Fire and Fury?an inside account of the Trump administration?s first year?were released, Bannon had another enemy to add to the pile he has already assembled with impressive speed: the president himself. You?ve likely read parts of the excerpts: the part where Bannon sits with the late Roger Ailes at a lunch in New York City, talking about Trump as some sort of ignoramus frontman for his philosophical principles and ideas (?He gets it…Or he gets what he gets?); his disgust with Jared Kushner and Ivanka Trump; his prediction that Special Counsel Robert Mueller is going to ?crack Don Junior like an egg on national TV;? and his description of Kushner, Don Jr, and Paul Manafort as ?treasonous? for meeting a Kremlin-linked lawyer in Trump Tower. None of it paints Bannon is a good light with anybody, particularly his former boss, who tore the Breitbart rabble-rouser?s eyes out with a insult-laden public statement of his own.

A day after portions of Wolff?s book were released, the White House was in damage control (yet again), calling the book a piece of unsubstantiated trash filled with anonymous sources that didn?t exist, which reads like a gossipy story in Esquire. But it was Bannon who was the real loser of this entire episode. Because he couldn?t keep his mouth shut to a reporter and acted like some sanctimonious, 21st Century political philosopher with a higher purpose to save the country from the evils of progressivism, multiculturalism, and illegal immigration, he has lost a good deal of the ammunition he had in his armory. Indeed, because he couldn?t go a second with throwing the people he used to work with and for under the bus at the first opportunity, Bannon has isolated himself from the very people he needs to carry his message and find his operation.

Robert and Rebekah Mercer, who provided Bannon with seed money for many of his projects, have cut ties. Candidates who once begged for Bannon?s endorsement are moving away from him. The president and the White House have publicly humiliated him. And Breitbart board members are thinking about firing him as chairman.

The populist political revolution Steve Bannon was preparing for looks like it has imploded. You can?t run a revolution without money.

Whether Bannon survives is tough to predict. Many in Washington believed and no doubt hoped his political star was dimmed after Chief of Staff John Kelly asked him to resign. But he started his comeback immediately, going back to his old stomping grounds at the Breitbart headquarters the very same day to hold an editorial meeting. He may have been outside of the White House, but he was also uncaged.

Now, with politicians scurrying away from him, donations drying up, the White House and Trump hating his guts, and members of the conservative base beginning to turn on him, Bannon finds himself out in the cold, humbled that he took his boundless aspirations too far. And it wasn?t the aforementioned establishment that did him in, but his own presumptuousness, extreme egoism, God complex, and hubris.