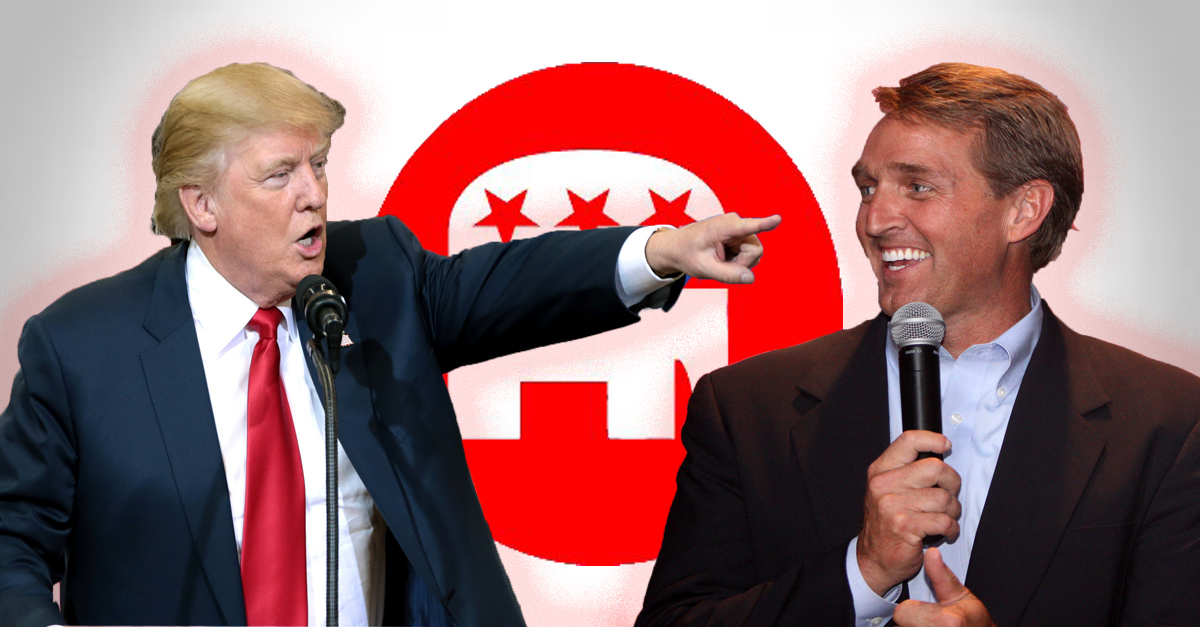 Republican Senator Jeff Flake of Arizona was caught on a hot mic during a Saturday meeting with voters saying, “If we become the party of Roy Moore and Donald Trump, we are toast.”

Flake was speaking to his friend John Giles, who is the mayor of Mesa, Arizona. The senator, who has announced that he will not run for re-election, was talking to voters about tax reform. The House of Representatives passed their tax reform bill Thursday, which means that it will be up to the GOP-controlled Senate to push the bill through.

Republican lawmakers in the upper chamber are still trying to whip the votes they need and the count is still unclear; remember, the GOP’s Obamacare repeal failed to pass the Senate when Flake’s fellow Arizona Senator John McCain gave a late-night “no” vote.

In their discussion, Giles also seemed to throw an insult at Trump, saying, “I am not throwing smoke at you, but you are the guy–just for fun, think about how much fun it would be–just to be the foil, you know, and point out what an idiot this guy is. Anyway, I hope you do it,” ABC reports.

During a speech on the floor of the Senate in October, Flake announced that he will not run for re-election and was critical of the president. He began his remarks by saying, “When the next generation asks ‘Why didn’t you do something? Why didn’t you speak up?’–what are we going to say?” Flake, who has been in the Senate since 2013, continued, “Mr. President I rise to say enough…I have children and grandchildren to answer to.”

On Saturday afternoon, the Arizona senator tweeted out the link to ABC’s story commenting, “No news here.”

No news here. I've been saying this to anyone who will listen https://t.co/50klmeSm5a

Flake is one of the many Republican senators who has cut ties with Alabama Senate candidate Roy Moore, saying, “If there is any shred of truth to the allegations against Roy Moore, he should step aside immediately.” In response to his party’s decision to leave him alone, Moore declared that the Washington establishment is trying to “steal the election.”

This is an effort by Mitch McConnell and his cronies to steal this election from the people of Alabama and they will not stand for it! #ALSEN

Flake and Trump have constantly butted heads, and Trump openly supported Kelly Ward who lined up to run against Flake in the Republican primary before he dropped out. Ward is a bit of a firebrand, who has the backing of Breitbart editor Steve Bannon, representing the populist, pro-Trump part of the GOP. She’s raised a few eyebrows with her behavior, which includes propagating the chemtrail conspiracy theory and, upon learning of John McCain’s brain cancer, saying that he should step down and that she should get his seat.

Just as an illustration of his true feelings, here’s every time that President Trump has tweeted about Jeff Flake:

The Great State of Arizona, where I just had a massive rally (amazing people), has a very weak and ineffective Senator, Jeff Flake. Sad!

Great to see that Dr. Kelli Ward is running against Flake Jeff Flake, who is WEAK on borders, crime and a non-factor in Senate. He's toxic!

Phoenix crowd last night was amazing – a packed house. I love the Great State of Arizona. Not a fan of Jeff Flake, weak on crime & border!

Jeff Flake, with an 18% approval rating in Arizona, said "a lot of my colleagues have spoken out." Really, they just gave me a standing O!