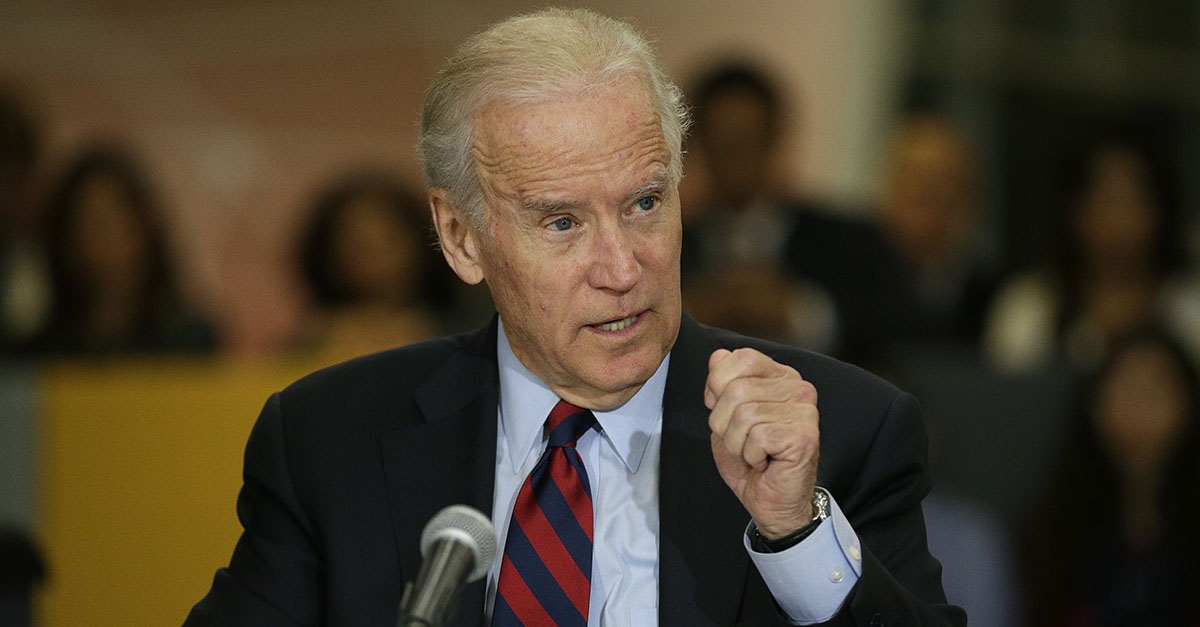 “You should be able to listen to another point of view, as virulent as it may be,” Biden said, when asked what could be done to “encourage people to be more accepting of opposing viewpoints.”

The event, part of a speaker series organized by the University’s Center for Political Communication and centered on the theme “As We Stand, Divided,” aimed to “explore the many divides that exist in the United States,” according to the CPC’s website.

The former VP reminded the crowd that he “got in trouble” for denouncing the left-wing protests that forced Milo Yiannopoulos from the lectern at U.C. Berkeley in January and then reached even further back, alluding to the Free Speech Movement of the 1960s: “When I was coming up through college and graduate school, free speech was the big issue, but it was the opposite. It was liberals who were shouted down when they spoke.”

Then he dropped his bombshell: “[L]iberals have very short memories. I mean that sincerely.”

This deficiency of liberal memory has been a prominent theme in American politics lately. The same liberals who screamed for George W. Bush to be arrested as a war criminal back in 2004 spent the last few days applauding his veiled attack on President Trump. In just four short years, Mitt Romney went from a dangerous, oligarchic extremist to a champion of sanity. Hillary Clinton urged him to accept the job of Secretary of State if Trump offered it, and Biden himself recently encouraged Romney to run for U.S. Senate.

Even Rep. Nancy Pelosi, who in 2012 suggested that a vote for Romney was a vote against the American dream, was met with applause Wednesday when she asked, “Wouldn’t it be nice if [Romney] were president of the United States?”

A tweet I recently chucked at suggested that perhaps in 10 years we’ll be looking back wistfully on the dignified statesmanship of Donald Trump while President Kid Rock is labeled a disgrace to the office and the country.

For all its flaws, perhaps the greatest legacy of the Trump administration will be a new political discourse more willing to seek common ground and less eager to cry wolf. I’d love nothing more than a return to the era of the boring, policy-heavy debates between Nixon and Kennedy in place of the exaggerated ad hominems and mutual disdain that characterized the Trump/Clinton debates.

Another symptom of the goldfish-like memories of liberals (and conservatives) is their tendency to expand government power whenever they find themselves in office, only to gasp at the overreach of the next administration. As the headline of a recent USA Today op-ed put it, Trump “didn’t create danger of presidential dictatorship, he inherited it.”

At the height of the Great Depression, Franklin Delano Roosevelt’s advisors suggested that he propose a large federal social security bill, he responded with a restraint born of foresight: “All the power shouldn’t be in the hands of the federal government. Look — just think what would happen if all the power was concentrated here, and [radical populist] Huey Long became president!”

Even FDR, who expanded the power of the federal government perhaps more than any other president, had some inkling that eventually he wouldn’t be president anymore, and that any powers he added to the office would be someday exercised by someone with whom he would disagree.

The 24-hour news cycle and the omnipresent din of Twitter makes it easy to take an ahistorical view of American politics, but we must resist that temptation or fall into an ever-deepening spiral of mutual demonization and boundless governmental authority.