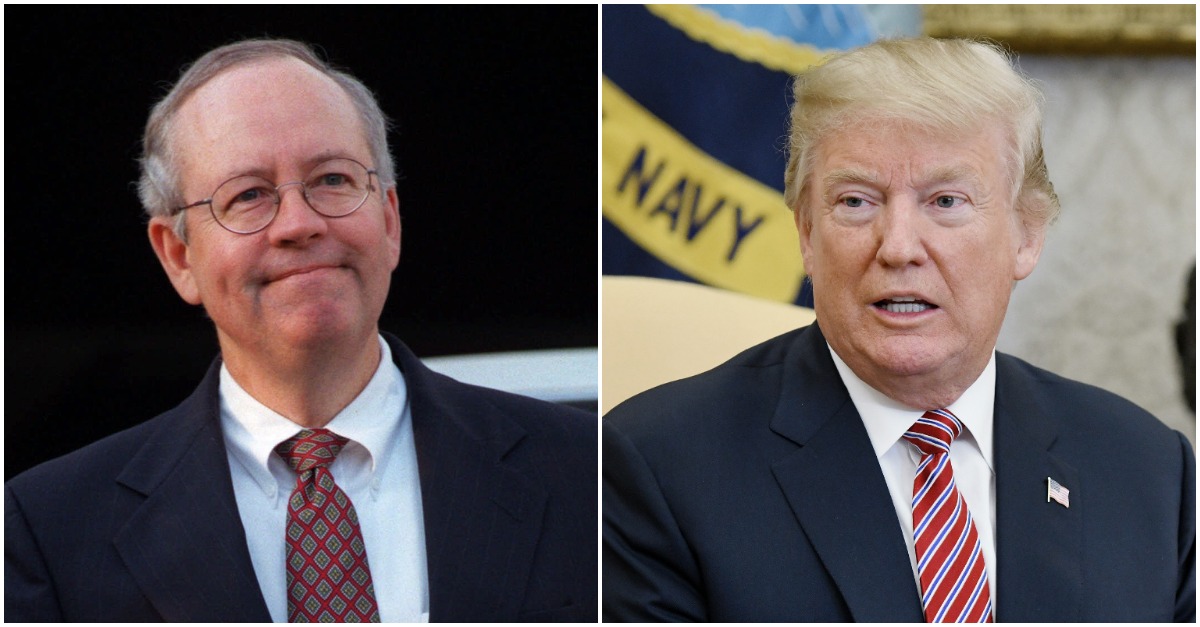 Former independent counsel Ken Starr said on Friday that he would warn President Trump about sitting down with Robert Mueller.

Starr, who oversaw the investigation into Bill Clinton, told CNN’s Alisyn Camerota that if he were Trump’s lawyer, “I would advise him of the risks. This is a risky process. We have two guilty pleas for false statements to the FBI. This very serious business, this is not a press conference.”

If former independent counsel Ken Starr were President Trump's attorney, would he let him sit down with special counsel Robert Mueller?

"I don't know all the facts … but I would advise him of the risks," he says. https://t.co/DDsfjkZZTu pic.twitter.com/HWbWb9Jl3A

The former prosecutor also noted that Trump attorney Ty Cobb has said that Trump will meet with Robert Mueller. Starr continued, “as a practical matter, I think he will go forward, or certainly, he needs to go forward.” When pressed, Starr said that he thinks Trump will sit down with Mueller but noted “depending on what Bob Mueller knows — and we don’t know what Bob Mueller knows — he will want to talk to the president. If the president resists, then Bob Mueller has subpoena power.” If Trump should resist the subpoena, Starr said that the case will go to the courts, noting “I don’t think that’s a very attractive spectacle for the president, frankly — there’s a huge risk.”

Starr became a household name in the late ’90s as he investigated Clinton. Eventually, he was unsuccessful in getting the 42nd president thrown out of office despite the fact that Clinton was impeached on two charges.

RELATED: Ken Starr, who investigated Bill Clinton as a special counsel, hammers Donald Trump over his treatment of Jeff Sessions

Since then, Ken Starr has stepped away from the political arena but has been critical of Trump. Over the summer, he slammed the president’s treatment of Attorney General Jeff Sessions, calling Trump’s behavior “one of the most outrageous — and profoundly misguided — courses of presidential conduct witnessed in five decades in and around the nation’s capitol.”

Robert Mueller’s investigation doesn’t show any signs of letting up any time soon and it’s still unclear if President Trump will be brought in to speak to the special counsel. Investigators have brought in a number of people close to Trump and have reportedly climbed up the ladder of aides, interviewing West Wing employees that were or are in the president’s inner circle, including Hope Hicks and Reince Priebus with indictments handed down on Trump campaign staffers Paul Manafort and Michael Flynn.