Days after his NBC counterpart and former “Saturday Night Live” colleague Jimmy Fallon was criticized for humanizing Republican presidential candidate Donald Trump, despite the many awful things Trump has said on the campaign trail, comedian Seth Meyers made it clear he would do no such thing on his program.

The “Late Night” host delivered a monologue on Monday that excoriated Donald Trump, with a specific focus on Trump’s flip-flopping on his previous stance that President Barack Obama wasn’t born in the U.S.

RELATED: Donald Trump reminded us why a Republican Party without libertarian values isn’t worth it

Last week, Trump hoodwinked many media outlets when he said he would talk about his change of heart on Obama and his birthplace. Instead, cameras ultimately broadcast many ringing endorsements for Trump during an opening press conference at his new hotel in Washington D.C. Trump eventually took the microphone to give a halfhearted admission that President Obama was born on American soil.

“Obama was born in the United States. Period? Fuck you, exclamation point!” Meyers said during his broadcast. “You don’t get to peddle racist rhetoric for five years and decide when it’s over. We decide when it’s over! And it’s certainly not over after a 30 second statement in the middle of a hotel commercial.”

Meyers then compared Trump’s decision to change his stance to Bruce Springseen changing his song, “Born to Run.”

“’Obama wasn’t born here’ is your No. 1 hit,” he joked. “Saying you got it from Hillary would be like Springsteen saying he only wrote ‘Born to Run’ because he heard Bon Jovi say it once.”

According to Meyers, Trump built his career around a “racist lie” and should be held accountable. Meyers got particularly passionate while he ran through a series of statements that Donald Trump made in support of his previous stance.

One tweet, in which Trump implies that a person was killed for knowing the “truth” about President Obama, particularly angered Meyers.

“Let’s just step back here and think about how insane that is. Trump thinks the president orchestrated a plane crash so accurate that it only killed the one person who could prove his birth certificate was a fraud,” Meyers said. 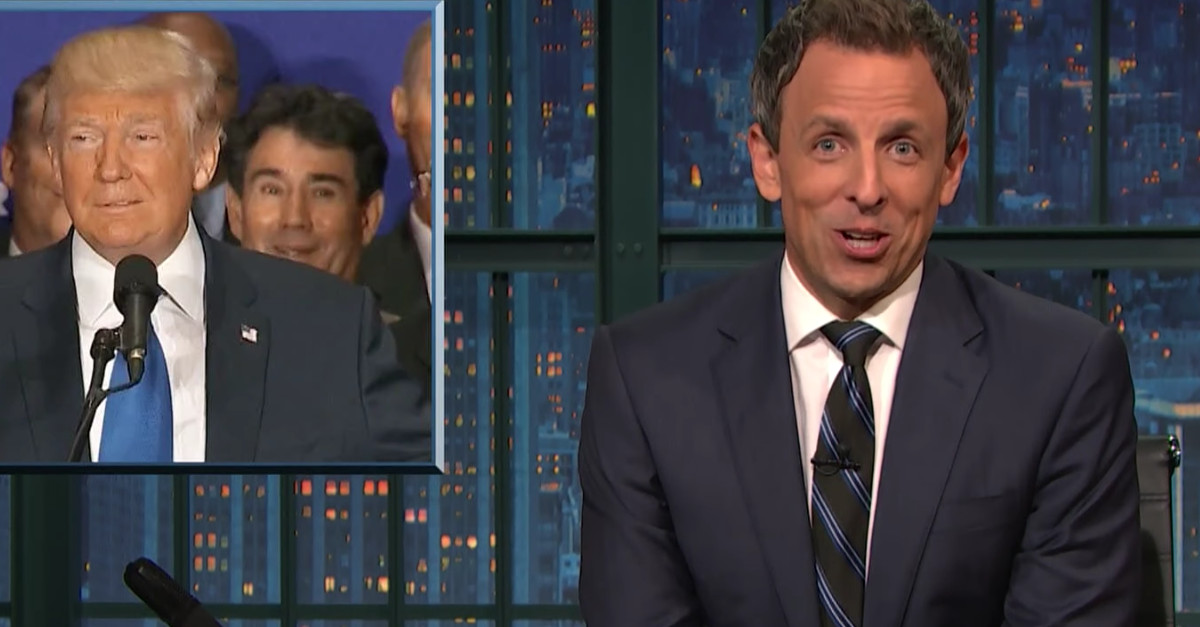