Mike Pompeo is a poor choice for Secretary of State 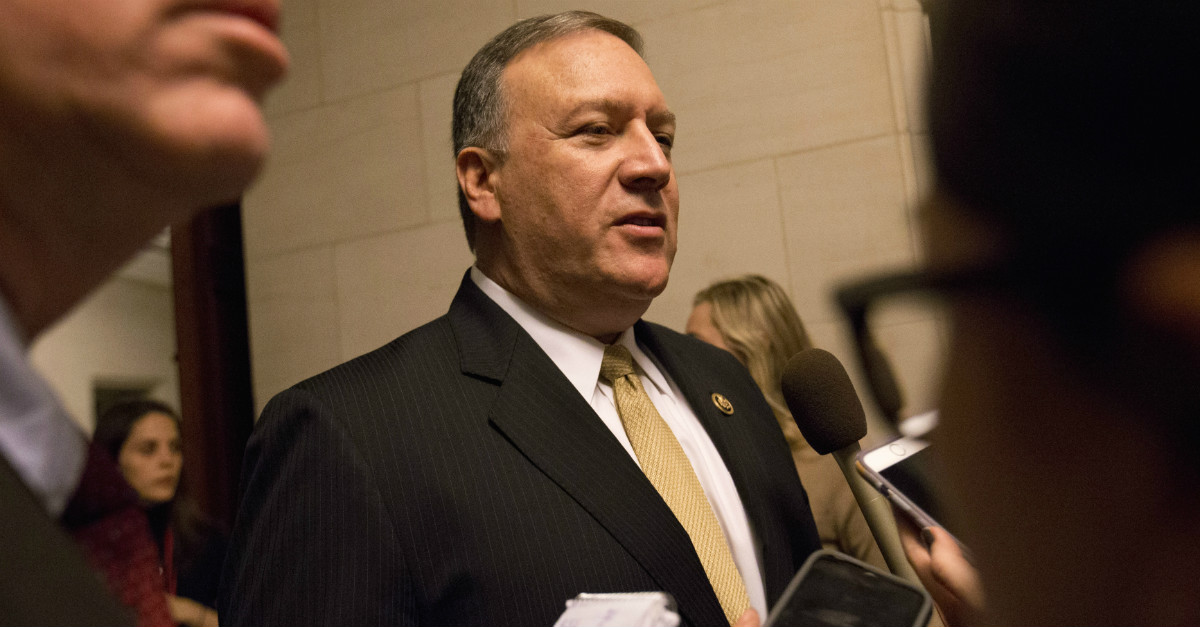 Secretary of State Rex Tillerson is everybody’s favorite punching bag. It has been that way ever since he accepted President Donald Trump’s offer to lead the State Department, and it will continue to be that way for as long as he stays in the job.

A report this morning from the New York Times that Chief of Staff John Kelly is orchestrating a bureaucratic musical chairs scenario whereby Tillerson would be pushed out and replaced by CIA Director Mike Pompeo should therefore not come as a complete surprise. Tillerson’s stock in the administration has fallen precipitously since the summer, when Trump publicly undermined his own Secretary of State’s effort to get the Saudis, Emiratis and Qataris around the table to talk about a solution to the diplomatic standoff within the Gulf Cooperation Council. President Trump would eventually come around to the notion of being impartial — even suggesting to Gulf Arab leaders that they come to Washington to talk about a way forward — but Trump’s pro-Saudi tweet was covered so extensively and reverberated throughout the region that the damage was already done. Tillerson left feeling not only undermined, but political weakened. The Qatar episode made it look as if he was on the outside looking in, cut off from the heavy hitters in the administration.

RARE POV: How bad is it between Donald Trump and Rex Tillerson?

Once a bombshell NBC News report was published in October, in which anonymous officials disclosed that Tillerson called Trump a “moron” for suggesting a massive increase in the U.S. nuclear weapons arsenal, the relationship between the two men was largely broken beyond repair.

Rumors of Tillerson’s ouster, however, are further complicated by the fact that Pompeo may take over for him.  That may the most disturbing part of this entire story — that somebody as dogmatic, ideological and partisan as Mike Pompeo would be responsible for managing U.S. foreign policy.

Pompeo is the president’s favorite hardliner. When he was a congressman representing Kansas’s 4th District, he was an outspoken proponent of blocking any nuclear agreement with Iran that didn’t result in Tehran’s full surrender. The fact that the Iranian government would never agree to demobilize every last screw of its nuclear program and made that position abundantly clear before nuclear negotiations even began didn’t concern Pompeo in the least — Iran is led by a bunch of evil, religious fanatics, so they could never be trusted to abide by a deal, whatever it was. Pompeo has proven to be wrong on this score, but that hasn’t dissuaded him from using his perch at the CIA to pressure his employees to look under every nook and cranny to find evidence of Tehran’s noncompliance. To date, the U.S. intelligence community hasn’t found any evidence that Iran is breaking its commitments. Nor has the International Atomic Energy Agency. And yet Pompeo persists that his hunch is correct.

I could, of course, be wrong.  There is always an outside possibility Pompeo could change his stripes and become a more pragmatic animal. Perhaps he will magically turn over a new leaf when he walks through the door and quickly arrive at the realization that if he hopes to be more successful than Tillerson has been, he can’t strut into the office and think that every single country on the planet is going to bow at the alter of America without receiving some substantial concessions in return. But there has been zero evidence — at least from those of us who aren’t privy to inside information — that Pompeo is capable of such a transformation. He was a hardline Republican in Congress and he has proven to be hardliner as CIA Director. What are the chances that he won’t carry those qualities with him to Foggy Bottom?

RARE POV: Rand Paul: Why I voted against the new CIA director

As a supporter of Tillerson’s nomination when it was first announced after the 2016 election, I feel a little bit sorry for the man. He’s brought a lot of these problems on himself by treating the Foreign Service as an overrated commodity. But it would be unfair not to acknowledge the bad cards Tillerson was dealt form the outset, coming into a job that he probably didn’t even want in the first place. For those of us who thought that a fresh face from the private sector who understood Washington’s limitations would help reset America’s compass away from the strategic drift of years past, Tillerson getting squeezed out is an ignominious end to a short and lackluster tenure.

We can only hope that Tillerson’s replacement won’t compound ignominy into utter disaster.