Milo could learn from Bill Maher 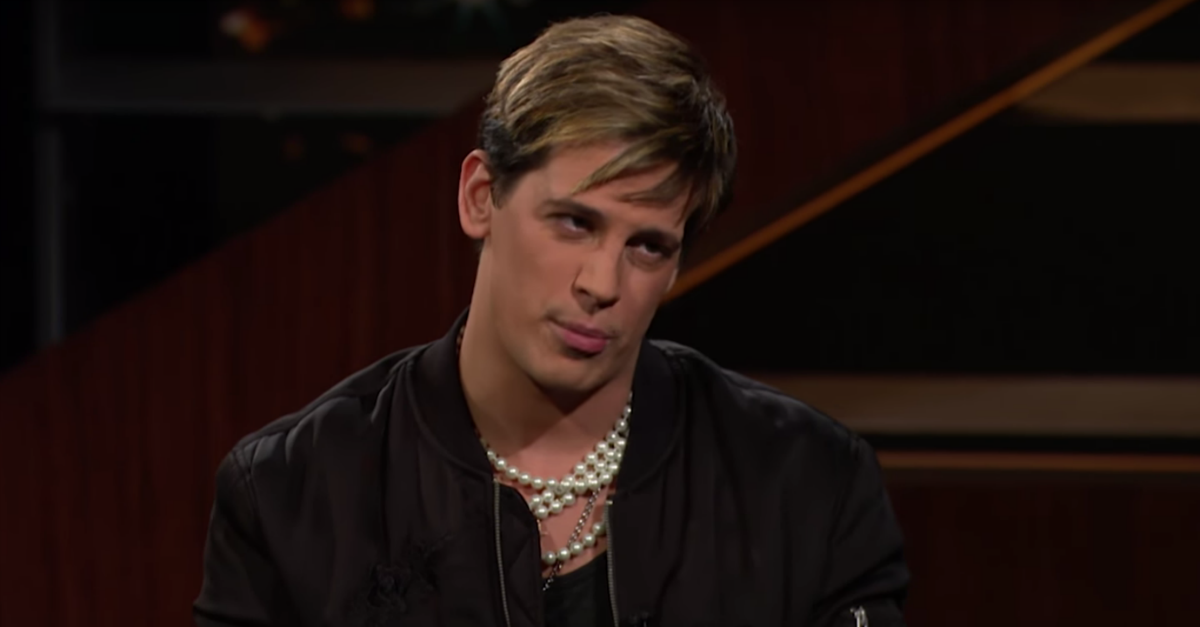 The sardonic, liberal atheist who has been the essence of controversial since 1993 may have found an unlikely Padawan in the gay, Catholic Trump supporter who everyone either hates to love or loves to hate.

In a move that provoked widespread outrage (just like everything else associated with Milo) and led one guest to refuse to appear on the show, Bill Maher hosted Breitbart editor and recently announced CPAC headliner Milo Yiannopoulos on his HBO show, “Real Time with Bill Maher,” last Friday.

While some commentators criticized Maher for ?mainstreaming?hate,? they failed to recognize that Maher could yet have a profoundly positive influence on Yiannopoulos, and perhaps even facilitate his evolution from childish attention-seeker to mature provocateur.

Yiannopoulos appeared on “Real Time” wearing an excessive number of bracelets and strings of pearls. He and Maher quickly bonded over their love of free speech.

?If I banned everyone from my show who I thought was colossally wrong, I?d be talking to myself,? Maher told Yiannopoulos. He noted their shared Islamophobia and that both had sparked controversies at UC Berkeley (although in both cases, the university sided with the speaker and with free speech).

Yiannopoulos even playfully attempted to one-up Maher as a fellow controversial public figure, saying, ?I do get syringes through my door; I get dead animals through my door. You say you get mean tweets, that?s okay. It?s not a competition.?

They also bonded over the tendency of liberals to always ?take the bait,? a conversation that started when Yiannopoulos intentionally provoked boos with a comment that homosexuals make bad employees but are ?not as bad as women? before chiding the audience, saying, ?You?re very easy, very easily triggered; it?s pathetic,? which prompted laughter. Later, Yiannopoulos described Maher as ?the only good [liberal].?

As much as I hate to agree with Yiannopoulos, he has a point there.

RELATED: Bill Maher and Milo Yiannopoulos had a surprisingly cordial conversation despite their huge differences

In an age where liberal political comedy talk shows are multiplying like enchanted goblets, Maher has a courage that is unique among them. Samantha Bee, John Oliver, and Trevor Noah spent virtually the entire election shamelessly shilling for Hillary. Recently, Noah made the bold move of inviting Tomi Lahren on his show, and the result was a good and spirited debate. But Maher is way ahead of him, having had Ann Coulter ? the older, shriller, crazier Lahren ? on his show a dozen times since 2003.

It’s not just Coulter. Maher has sat down with Michael Moore, Dinesh D?Souza, Mike Huckabee, Neil DeGrasse Tyson, Sarah Silverman, Ron Paul, and Oliver Stone ? the entire political spectrum from one end to the other. His panels often devolve into all-out brawls, but the fact that they exist in the first place is a testament to the greatness of our country.

Maher, to a degree that some have understandably criticized, steered his interview with Yiannopoulos away from their disagreements and toward the common ground they share. You could almost detect a big brotherly impulse in Maher as he agreed with Yiannopoulos that it is sometimes necessary to hurt people in order to speak the truth while simultaneously cautioning him against making unwarranted personal attacks, referring specifically to Yiannopoulos? feud with actress Leslie Jones that ultimately got him banned from Twitter.

Later, Maher advised Yiannopoulos, as a fellow free speech advocate, to ?get off the Trump train.?

Once Yiannopoulos joined the panel, he faced a great deal of hostility, leading two to tell him to go f*ck himself and playfully begging the third to do the same. Maher, however, remained more neutral, responding, ?That?s?not unreasonable? when Yiannopoulos stated his opposition to transgender bathroom access.

RELATED: Milo Yiannopoulos? Twitter ban will only make him stronger

In stark contrast to Maher, panelist Larry Wilmore, another polemical liberal satirist whose “Nightly Show” failed after one season, shouted Yiannopoulos down and even tried to “straightsplain” the homosexual experience to a man wearing contoured makeup and four strings of pearls.

As always, Yiannopoulos seemed to feed off of attempts to dismiss or silence him, becoming more fey and combative as the night progressed and openly baiting the other panelists until Maher finally told him to shut the f*ck up too.

The message is clear. Yiannopoulos only puts on his persona in the presence of people like Larry Wilmore. When given a fair hearing, he’s calmer and less provocative for its own sake.

He should listen to Maher. He’d be well-served to ?morph? into less of a childish a**hole than he is currently ? while still retaining the piss and vinegar that makes Milo Milo and Maher Maher.