Milo is no free speech advocate 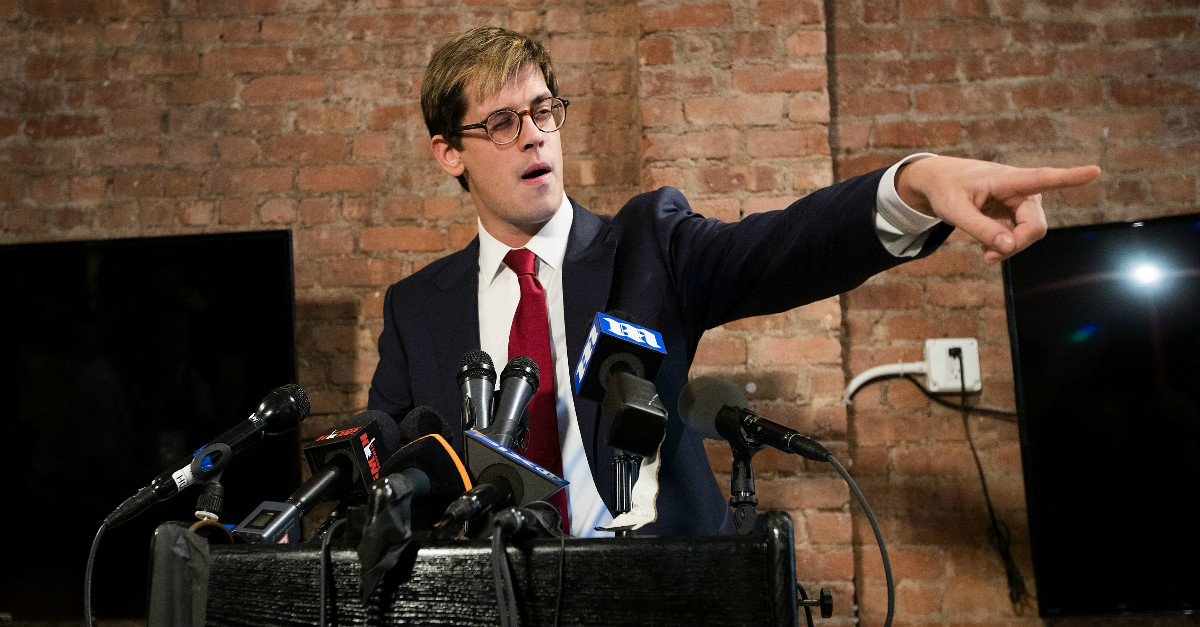 Photo by Drew Angerer/Getty Images
NEW YORK, NY - FEBRUARY 21: Milo Yiannopoulos announces his resignation from Brietbart News during a press conference, February 21, 2017 in New York City. After comments he made regarding pedophilia surfaced in an online video, Yiannopoulos was uninvited to speak at the Conservative Political Action Conference (CPAC) and lost a major book deal with Simon & Schuster. (Photo by Drew Angerer/Getty Images)

Is Milo Yiannopoulos truly a free speech advocate? That’s the question that should be at the heart of the controversy surrounding the revocation of his keynote speakership at the Conservative Political Action Conference (CPAC), his book deal with Simon and Schuster, and his resignation from Breitbart.

This question matters because despite Milo’s remarks supporting pedophilia, his grassroots supporters are rallying around him. To them, he is a Stockholm Syndrome victim who suffered at the hands of a Roman Catholic priest and is being unfairly targeted by the media and political establishment. He consistently receives a free pass for his actions — no matter how offensive or outrageous his comments are — because he is a “free speech advocate.” Criticism against him is spun into being an assault on free speech. For instance, Wikileaks founder Julian Assange recently referred to Milo’s exclusion from CPAC as an act of “censorship.”

However, the record reflects that Milo is not the free speech advocate that he claims to be.

RELATED: Milo’s comments about pedophilia made me feel sorry for him

As an attendee of his American University talk last year, I saw a sharp contrast between his stated support for freedom of speech and his actual rhetoric. When questioned by an audience member about his passionate support for then-presidential candidate Trump, who supported the anti-free speech positions of loosening libel laws against the media and of utilizing the government to shut down parts of the Internet, Milo surprisingly defended both positions.

Echoing Trump’s attacks on the “fake news media,” Milo assaulted the press for lying “as a matter of routine.” He called for a “mild discouragement in the law [to exist] to prevent journalists from knowingly and deliberately lying about people” to specifically “curtail some of the excesses of the hard left in American media.”

But he went chillingly further:

For true advocates of free speech, nothing could be more dangerous than this illiberal position. As highlighted by journalist and prominent free speech advocate Flemming Rose, who was targeted by Islamic fundamentalists for publishing cartoons of the Prophet Muhammad, this same control over the media was employed by authoritarian regimes to suppress dissenters and opponents. In fact, our founding fathers were so afraid of this outcome that they explicitly articulated within the First Amendment that the government could not infringe upon the freedom of the press.

Hence, it is frankly puzzling why self-described free-speech “advocate” Milo Yiannopoulos would use the language of industrial nationalization to call for the government to step in and dictate the functioning of the media — especially against a specific political faction.

But Milo doubled down on Trump’s support for government censorship of the Internet. Dismissing “free speech” concerns over this as “not very objectionable,” he called for the FCC to “block off certain geographic areas” through the Internet Protocol system to undermine ISIS and that “we could cut off the access to large geographies in the Middle East from communicating with us and with themselves.”

Regardless of the feasibility of this proposal, his support for granting government the power to limit access to the Internet — like China’s “Great Firewall” — is a stark contrast to the open nature of the Internet promoting freedom of expression. It flies in the face of the efforts of the American Civil Liberties Union and the Electronic Frontier Foundation to fight off censorship laws infringing on the Internet as platform for free speech.

These disturbingly authoritarian remarks should call into consideration Milo Yiannopoulos’ “free speech advocate” credentials that form the core of his public persona. Does he truly stand up for freedom of speech and of the press, or does he merely utilize them as cover for his views?

That is the question that conservative and libertarian students inviting Milo to speak at their campuses should be asking themselves, and that should be part of the CPAC exclusion debate. If not, just as the airing of Trump’s sexual assault discourse failed to break his momentum, so too will this episode fail to challenge Milo’s grassroots support.

Gaurang Gupte was a Cong. Bill Archer Fellow, and is a current first-year medical student at the Washington University School of Medicine.