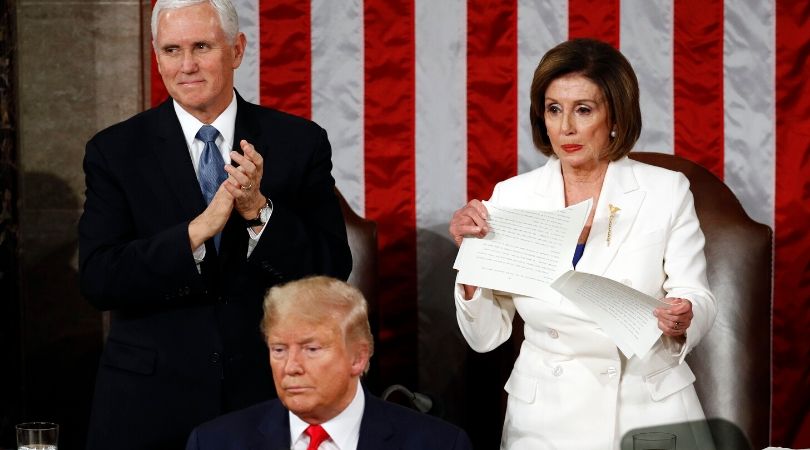 President Donald Trump and House Speaker Nancy Pelosi added fuel to their fire on Tuesday night as the two clashed at yesterday’s State of the Union Address. After President Trump appeared to ignore Pelosi’s attempt at a handshake, she decided to rip up her copy of his speech after he finished.

The exchanges came the night before the Senate is expected to acquit Donald Trump in his impeachment trial, which was sparked by House Democrats’ investigation of the President’s conduct regarding Ukraine. This is the second time Pelosi goes viral for clapping back at the President after last year’s address where he also failed to acknowledge her after she introduced him and sat behind him next to Vice President Mike Pence.

.@SpeakerPelosi tears up of State of the Union speech.#SOTU #SOTU2020 pic.twitter.com/sIpi4G7KsL

According to CNN, it is still unclear whether President Trump avoided the House Speaker’s handshake on purpose, but sources believe the decision by Pelosi to tear up a copy of Trump’s speech was not on purpose, rather sparked by her anger after the address.

Both Pelosi and Trump have had a complicated and tortuous relationship since he took office in 2017. Their animosity has since intensified since Democrats took power of the House and grew further with Trump’s December 18, 2019 impeachment on allegations of obstruction of Congress and abuse of power.

House Speaker Pelosi was asked by reporters why she tore up the document, in which she answered it was a “manifesto of mistruths” and it was the “courteous thing to do considering the alternatives.” Following the President’s speech, Pelosi tweeted, “Democrats will never stop extending the hand of friendship to get the job done #ForThePeople. We will work to find common ground where we can, but will stand our ground where we cannot.”

The hashtags #NancytheRipper and #PelosiTantrum have been trending on Twitter since the occurrence, in which later #NancyPelosiRocks also began to pop up with several users and celebrities, members of Congress and Democrats defended her actions.

One of our last surviving Tuskegee Airmen.

The survival of a child born at 21 weeks.

The mourning families of Rocky Jones and Kayla Mueller.

A service member's reunion with his family.

As expected there continues to be a deep partisan division over who was right and who was wrong. Democrats focused on Trump’s handshake snub which was later spotlighted on Twitter with a photograph of the Presidents turning his back. President Trump has yet to post about the incident, but has retweeted over 20 posts attacking the House Speaker which include the #PeolosiTantrum hashtag, and a tweet calling Pelosi a “bitter drama queen pitching a little hissy fit.”

The president also retweeted an official post from the White House Twitter which implied that by tearing a copy of President Donald Trump’s speech, the House Speaker ripped up the memories of Americans who were cited in the speech.