Neil Gorsuch is the president Republicans wish they could have 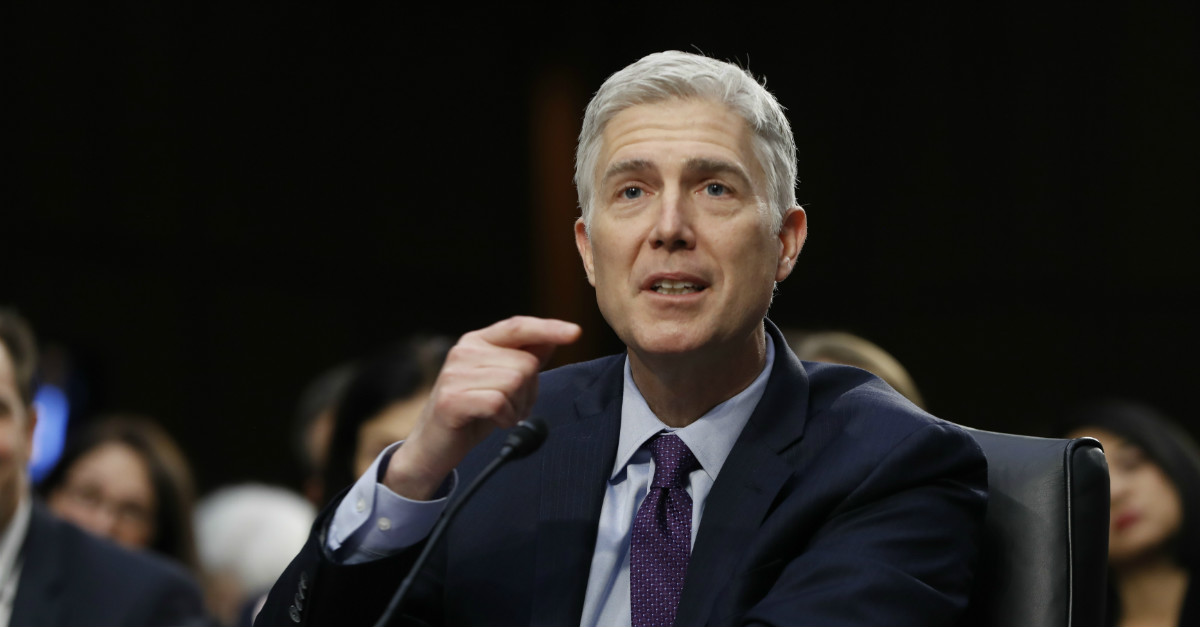 In his novel “Supreme Courtship,” Christopher Buckley mocked the ruthless opposition research that members of the Senate Judiciary Committee do on Supreme Court nominees:

Senator Mitchell’s Judiciary Committee staff investigators were known on Capitol Hill as the Wraith Riders, after the relentless, spectral, horse-mounted pursuers of hobbits in “The Lord of the Rings.” It was said in hushed tones on Capitol Hill that the Wraith Riders could find something on anyone: could make it look like Mother Teresa had run a whorehouse in Calcutta; that St. Thomas More had been having it off with Catherine of Aragon; or that Dr. Albert Schweitzer had conducted ghastly live medical experiments on helpless, unanesthetized African children on behalf of Belgian drug companies.

The real-life Wraith Riders appear to have come back mostly empty-handed on Neil Gorsuch, Donald Trump’s first prospective Supreme Court justice who stared into the dank Judiciary Committee maw earlier today. The best they could muster was a stretch of an allegation that Gorsuch had made a dubious comment about maternity leave in front of a class. Three students present for the remark promptly emerged to swat it down, and the judge himself easily disarmed it when he was grilled about it by Senator Dick Durbin.

Beyond that, it was the usual twaddle: he’s a tool of the powerful, his decisions have screwed the poor, blah and blah and blah, along with endless attempts to coerce Gorsuch into responding to statements made by Steve Bannon. Asked whether Donald Trump had made him pledge his fealty to overturning Roe v. Wade, Gorsuch denied it and said “Senator, I would have walked out the door.” Quizzed about Trump’s travel ban, he promised to “apply the law faithfully and fearlessly.” He repeatedly returned to his core jurisprudential theme, which is that judges merely implement statutes that are written by Congress. The subtext to the senators was: “You want the law changed, change it yourself.” His originalism and his light touch had conservatives on Twitter cheering.

RELATED: Lindsey Graham accidentally confused the late Justice Scalia for another justice during a confirmation hearing

The most idiotic line of questioning came from Sheldon Whitehouse, the windbag from Rhode Island, who pressed Gorsuch on money that had been spent by anonymous donors on advertisements supporting his confirmation, a subject that falls miles outside the purview of a judge. “That’s a policy question for this body,” Gorsuch insisted, but Whitehouse pushed and pushed. “I am, with all due respect, Senator, not going to get involved in politics,” Gorsuch stipulated. “There’s ample room for this body to pass disclosure laws for dark money or anything else it wishes to that can be tested in the courts. So with all due respect, Senator, the ball’s in your court.”

It’s remarkable how the same liberals who gripe about Clarence Thomas getting too involved in politics can pivot seamlessly into complaining that judges like Gorsuch aren’t getting political enough. On display today was the conservative concept of the judiciary, distinct from the legislative process, barred from ideological indulgence?whether Democrats like it or not.

Gorsuch came off well at the hearing, really well, more like a politician than any lawman I’ve ever seen. Consequently, he at times sounded a bit unctuous, a bit Ted Cruz-esque (Cruz’s questioning of Gorsuch was almost sexual in its admiration), but the overall result was that of a controlled statesman who measured his words, spoke intelligently, and defused whatever grenades were thrown his way. For conservatives, accustomed to edge-of-their-seat Donald Trump press conference viewings that are always liable to end with the United States declaring war on Uranus, this stability was soothing. Mike Flynn might have floundered, Rex Tillerson got fatigued in Korea, but Neil Gorsuch needed no chaperoning.

That’s about all we can ask from our Trump-era public figures. Gorsuch will make an excellent Supreme Court justice. Jealous Republicans probably entertained the thought that he’d make a good president, too.