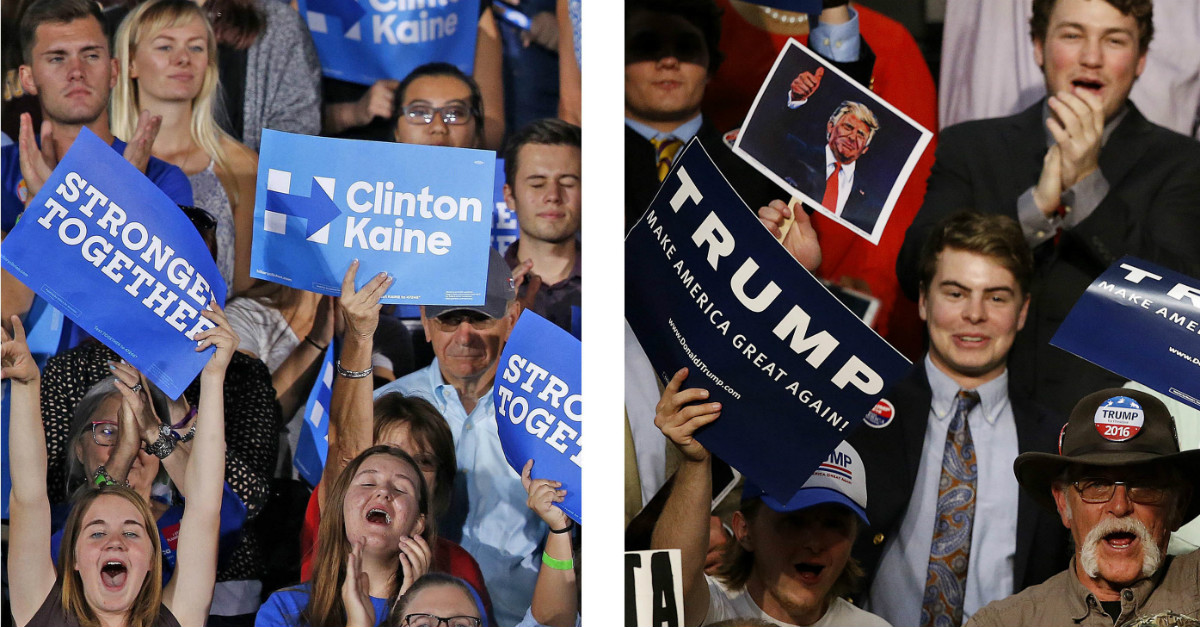 AP Photo/Ross D. Franklin, Gerald Herbert
This combination of photos shows supporters of Democratic presidential candidate Hillary Clinton in Tempe, Ariz., on Wednesday, Nov. 2, 2016, and supporters of Republican presidential candidate Donald Trump in Baton Rouge, La., on Thursday, Feb. 11, 2016. Voters' intense negative feelings about Trump and Clinton may say as much about the times as the candidates, says David Greenberg, a professor of history at Rutgers University and author of "Republic of Spin: An Inside History of the American Presidency." "There’s something about the polarized climate that we’re in that leads us to feel these things more strongly, to regard the opposition with such hostility, to talk in terms of threats to the Republic, to say 'Lock her up,' in ways we wouldn't have 30 years ago." (AP Photo/Ross D. Franklin, Gerald Herbert)

“Trigger Warning: The content ahead includes mentions of these real issues that you may be sensitive to or unwilling to address head on at this time.”

This is the message that will greet you if you install liberal web designer Gabe Whaley’s new Chrome extension and then try to visit websites containing words and phrases like “Planned Parenthood,” “Black Lives Matter,” and “transgenderism.”

The extension is called “Alt-Space,” since it purportedly provides a safe space for the alt-right.

Whaley told the Huffington Post that the extension represents his attempt to turn the phrase “trigger warning” against those who wield it, noting that conservatives have frequently taken liberal buzzwords and “bastardized their definitions, the most recent being ‘fake news.’”

Whaley—whose last major project was a website that lists all of the user’s friends who have “liked” Donald Trump on Facebook—is clearly trolling with his new extension, but that doesn’t mean he isn’t onto something.

Watching the Nixon/Kennedy presidential debate on YouTube, I noticed that the candidates tended to argue over facts and visions. Has the gross national product gone up or down? Has the state of American infrastructure improved? Has household income kept pace with the cost of living? Should the government do more or less? Should the country continue on its current path or do we need to make changes in order to keep moving forward?

Today, as befits the postmodern death spiral we’ve entered in the years since 1960, we argue over terms and definitions, not ideas.

RELATED: Censorship on college campuses is wrong, even if it’s conservatives doing the censoring

At this point in the article, I’d like to introduce my friends, Terry the Trump Supporter and Heather the Hillary Supporter, to demonstrate what American political discourse looks like today:

TERRY: Lock her up!

Come to think of it, this could also pass for a rough transcript of any of the three presidential debates between Trump and Hillary.

“Black Lives Matter” became “Blue Lives Matter” and “All Lives Matter.” “Deplorable” turned into a badge of honor. “Fake news” went from a phrase describing fly-by-night websites peddling blatantly false conspiracy theories for clicks and cash to an epithet that then-president-elect Trump could hurl at a CNN correspondent during a press conference. Kellyanne Conway’s “alternative facts” quickly became the Orwellian nightmare phrase that sold thousands of copies of “1984.”

And now, in the same proud tradition of appropriation, we have Alt-Space, which offers trigger warnings to those who openly mock the very concept.

Both sides have developed a significant lexicon of words and phrases they simply refuse to consider. “Pro-life” sends liberals into conniptions just as reliably as “check your privilege” enrages conservatives.

RELATED: Martin Shkreli was banned from Twitter because he wants to be an Ayn Rand protagonist when he grows up

In 1960, 5 percent of Americans said they would be upset if their child married someone from the opposite political party. Fast-forward 57 years and that number has climbed to 40 percent, even as Americans become far more accepting of their children marrying outside their religious tradition.