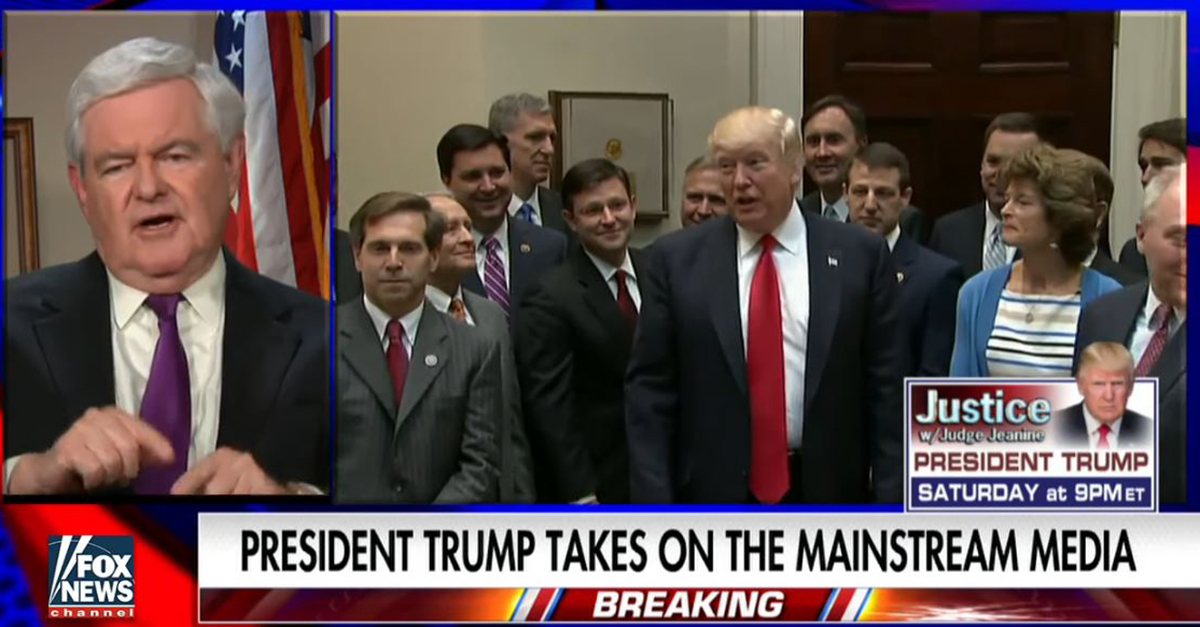 President Trump has shown hostility toward the American press since his campaign, going as far as calling this nation’s free press “fake news” and “the enemy of the people.”

While scholars and historians have compared such statements of disdain toward a mandatory pillar of democracy to those of authoritarian leaders, the president in recent days has threatened to stop the daily White House press briefing and issue only written statements.

And he has support for an idea that would limit the daily information available to the American people. Campaign aide and former Speaker of the House Newt Gingrich reinforced his position to Politico that the media is causing the chaos swirling around President Trump’s administration.

RELATED: Newt Gingrich declares to Sean Hannity that the “fascist left” is at war with Fox News

Gingrich, who recently released a book about the president called “Understanding Trump” and whose wife is a leading candidate to become ambassador to the Vatican, said the press should be banished to a nearby Starbucks and that Press Secretary Sean Spicer should take questions directly from the American people.

“I am personally offended by the American news media. I think it is destructive and disgusting. It is a danger to the country right now,” Gingrich told Politico. “The media is a corrupt institution and [President Trump] is tired of being harassed by people whose only interest is making him look bad.”

Gingrich told Politico that 10 percent of the president’s problems are from his White House’s mistakes and that 90 percent come from the American news media, who he believes has an agenda each time to damage President Trump.

A combative defender of Trump, Gingrich said he was watching CNN in Kiev and feared American news coverage would begin to manipulate the attitudes of foreign countries, saying the American news media is “totally misleading and totally false.”

He wrapped up his interview with Politico by saying “There are people here who read this crap and thinks we should be afraid. You have a national defense team of [Jim] Mattis, [John] Kelly and [Rex] Tillerson. This is the best team since Eisenhower.”

“These people around the world read you as though you’re real,” Gingrich continued. “The damage the news media is doing to the United States is despicable.”