On commutations and pardons — go big before you go home, President Obama 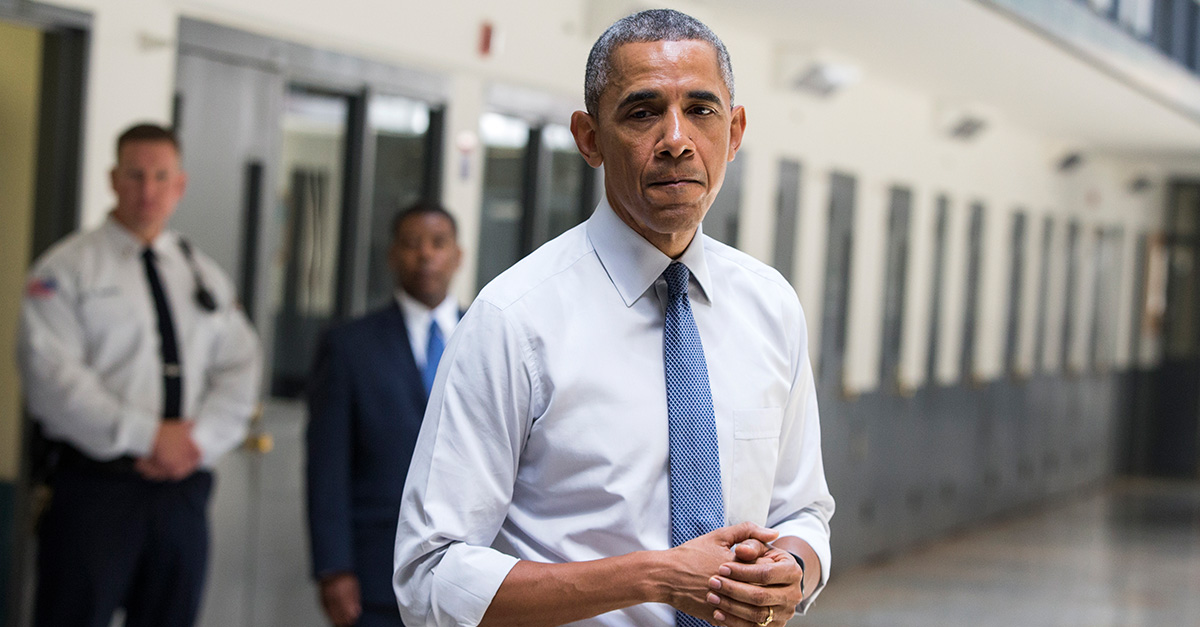 AP Photo/Evan Vucci
President Barack Obama pauses as he speaks at the El Reno Federal Correctional Institution in El Reno, Okla., Thursday, July 16, 2015. As part of a weeklong focus on inequities in the criminal justice system, the president will meet separately Thursday with law enforcement officials and nonviolent drug offenders who are paying their debt to society at the El Reno Federal Correctional Institution, a medium-security prison for male offenders near Oklahoma City. (AP Photo/Evan Vucci)

I’ve been critical of President Obama’s administration, and especially his very mixed record on foreign policy. Where his criminal justice reform is concerned, the frustration only continues.

On the one hand, Obama deserves credit for issuing a record number of commutations and pardons for people serving excessive prison sentences, often for nonviolent, drug-related offenses. He has been willing to work across party lines on this issue, and has used his bully pulpit to argue against mandatory minimums and humanize people whose lives were unjustly disrupted by the drug war.

All told, Obama easily ranks as an improvement over recent presidents past on criminal justice issues in general and the drug war specifically.

The problem is that is a fairly low bar, and Obama’s clemency program ? though absolutely fantastic for the people it affects ? is fundamentally a band-aid solution to a gaping wound. It fixes a few individual situations but leaves the broader legal injustice intact. Obama’s decision to grant these pardons is commendable, but it is also much less significant than the White House makes it out to be.

As a lawyer, Obama undoubtedly understands this. He must know that the pardons he has granted amount more to symbolism than substance. This is not a structural fix.

It is also not nearly as dramatic as the White House narrative suggests. Thought it is true that Obama has approved a record number of commutations, his commutation rate is nothing special. The number is only so high because applications have soared thanks to the president’s insistence, year after year after year after year, that he is deeply concerned about mass incarceration.

In reality, as The New York Times reported last year, even as “the total number of commutations for Mr. Obama?s presidency” top 1,100, that’s 1,100 out of more than “30,000 federal inmates [who] have come forward in response to his administration?s call for clemency applications.” In other words, all but a small fraction of the applications Obama has received he has ignored.

The president offered lengthy insight into his views on criminal justice reform in a 56-page contribution to the Harvard Law Review last week. “Criminal justice reform has been a focus of my entire career,” he wrote, recounting his involvement with the issue from his days as a community organizer on through his state senate work and time spent in national office.

In a section titled, “Reinvigorating Clemency,” Obama begins by indicating he realizes his commutations are at best a stop-gap measure:

Through considering grants of clemency to individuals in the federal system, the President gains a unique vantage point into the fairness of federal sentences. While not a substitute for the lasting change that can be achieved by passage of legislation, the clemency power represents an important and underutilized tool for advancing reform. The Framers gave the President this authority to remedy individual cases of injustice, and the Supreme Court has made clear that this power is entrusted to the President?s discretion, unimpeded by congressional limits.

This is all correct, but it is incomplete at best. The president has constitutional authority to grant group pardons, not merely to “remedy individual cases of injustice,” as P.S. Ruckman Jr., a political science professor with specific expertise in the president’s pardon power explains.

Furthermore, Ruckman adds, Obama’s article does not adequately address a key feature of the presidential pardon power: it is “unilateral, independent, free from restraint.” The Bill of Rights places extensive limits on what the government may do in the process of putting people in jail, but the Founders were much less concerned about the president abusing his power to let people out of prison.

In other words, if Obama believes, as he claims, that “it just doesn?t make sense to require a nonviolent drug offender to serve 20 years, or in some cases, life, in prison,” ? that to do so accomplishes nothing for public safety, ruins lives, and places unjustified costs on tax payers ? then he could with complete legality pardon that sort of prisoner en masse.

So for a president so infamously willing to govern with his “pen and phone,” Obama’s refusal to do so on an issue where he has both personal passion and explicit, unfettered, constitutional authority is bizarre and hypocritical in the extreme.

As his time in office draws to a close, Obama is reportedly under pressure to issue a final round of pardons and commutations. Let me add my voice to that chorus: Do it. Go “Bulworth.” You have the legal authority. You don’t have to win any more elections.

Go big before you go home.