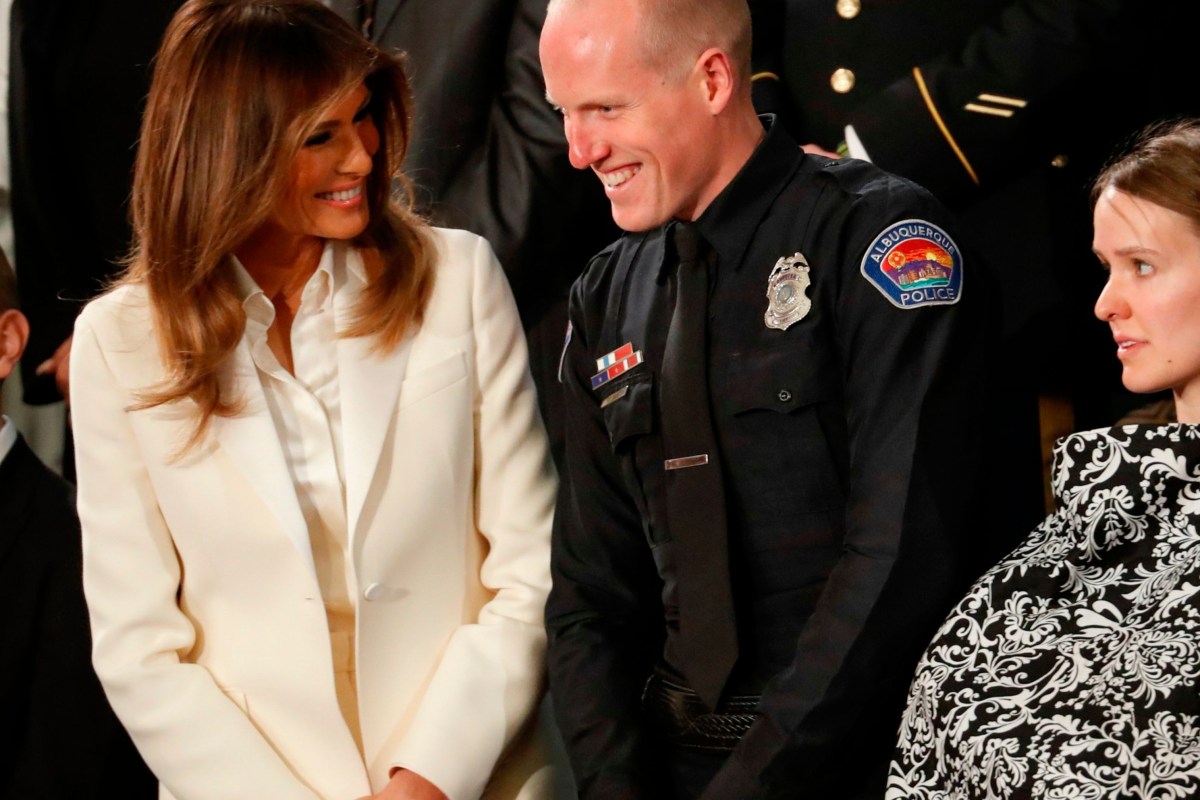 Among the First Lady’s 15 guests in her own box for the speech include Officer Ryan Holets, 27, a police officer in Albuquerque, New Mexico, and his wife Rebecca, who adopted a baby with his wife from a homeless mother who suffered from opioid addiction.

“Ryan and Rebecca, you embody the goodness of our nation,” President Trump said. “Thank you.”

The family got a one of the few full-chamber standing ovations of the night, the story of baby Hope lifting Democrats and Republicans alike out of their seats, even thought the baby slept through the clapping in her mother’s arms.

Holets and his wife already have four biological children.

He has been shot twice in the line of duty.

READ MORE: A family’s love shelters opioid-exposed babies — with room for moms, too

Here is his story:

A mother addicted to heroin is thanking a police officer for adopting her addicted baby girl, giving her a life she couldn’t.

Albuquerque police officer Ryan Holets was responding to a possible theft at a convenience store when he spotted a couple sitting on the ground near a cement wall, CNN reports. The couple were about to shoot up heroin.

Body camera video captured the encounter between the officer and the couple. You can hear the shock in his voice as he asks whether the woman is pregnant.

The woman, Crystal Champ, 35, confirmed that she was almost eight months pregnant.

“You’re going to kill your baby,” Holets told the woman. “Why do you have to be doing that stuff? It’s going to ruin your baby.”

Champ breaks down in tears in the video.

She recalled the moment to CNN in a later interview.

Holets, a father of four, said he felt he had to do something to help. He told Champ about his family and offered to adopt her baby.

“I was led by God to take the chance,” Holets said. “God brought us all together. I really don’t have any other way to explain it.”

Baby girl Hope Holets was born in October. She suffered withdrawals, but is doing much better now and has started to put on weight.

Champ says she’s glad her daughter will be part of a loving home.

“I just want her to be safe and secure, you know, and be in a family and be loved and have a chance,” said Champ.

Holets says the family plans to tell Hope about how she became a part of their family at some point, when the time is right.

“Whatever struggles she has, we’ll be there and we’ll work through it,” said Holets. “And that makes me happy.”