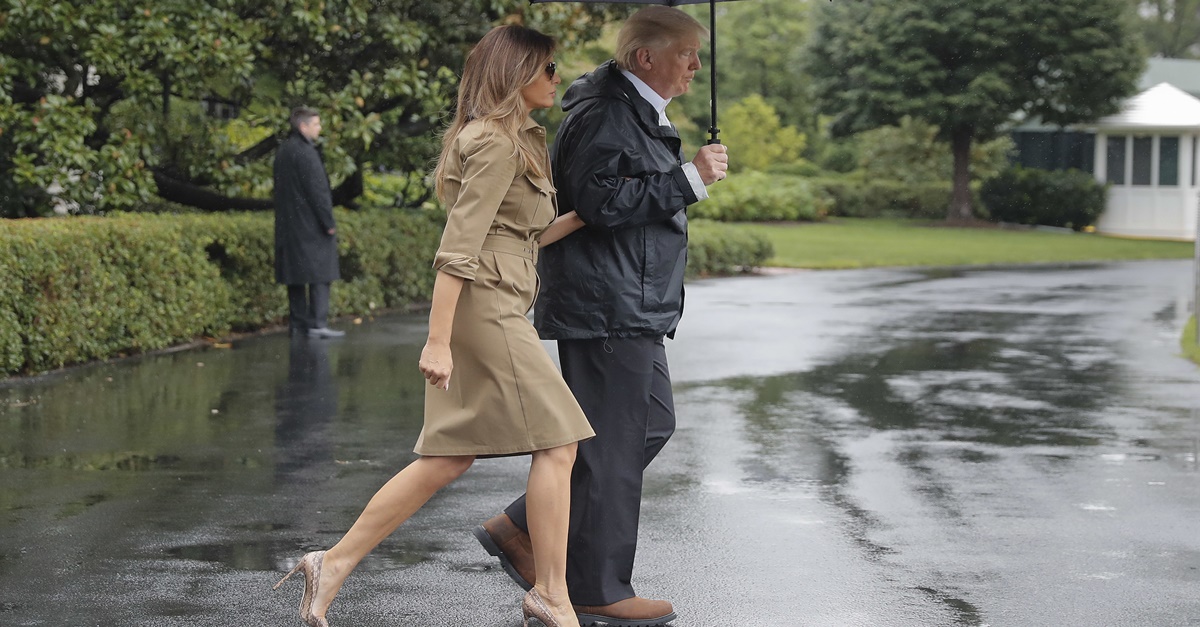 (AP Photo/Pablo Martinez Monsivais)
President Donald Trump and first lady Melania Trump walk across the South Lawn of the White House in Washington to board Marine One helicopter for the short flight to nearby Andrews Air Force Base, Md., Saturday, Sept. 2, 2017. Trump is traveling to Houston and Lake Charles , Louisiana, to survey the damage wrought by Hurricane Harvey. (AP Photo/Pablo Martinez Monsivais)

Melania Trump joined her husband on a second trip to Houston in the wake of Hurricane Harvey and she, again, boarded Air Force One in stilettos.

Some people were critical of the first lady’s decision to board the plane in heels when she went to Texas last week. Vogue even ran an op-ed blasting Mrs. Trump’s fashion choice.

On Saturday, when the Trumps went to Houston, the former model wore heels again. On both trips, she changed while on the plane.

Her first heels even earned the moniker “storm stilettos.”

On Saturday, her choice of shoes was similar to the first, but this time, they were snakeskin instead of black patent leather.

Both critics and supporters of the president also took note of the first lady’s hats on her trips. On the first trip, she wore a “FLOTUS” hat.

But for Saturday’s stop in Texas, the first lady wore a green hat with Texas emblazoned on the front. “FLOTUS” was scrawled across the back of the cap.

While President Trump’s USA hats are for sale on his campaign website, the instantly-iconic “FLOTUS” hat has not popped in any official store. Melania’s taste for iconic fashion started the moment she became first lady, with her Jackie Kennedy-inspired blue suit at the inauguration.