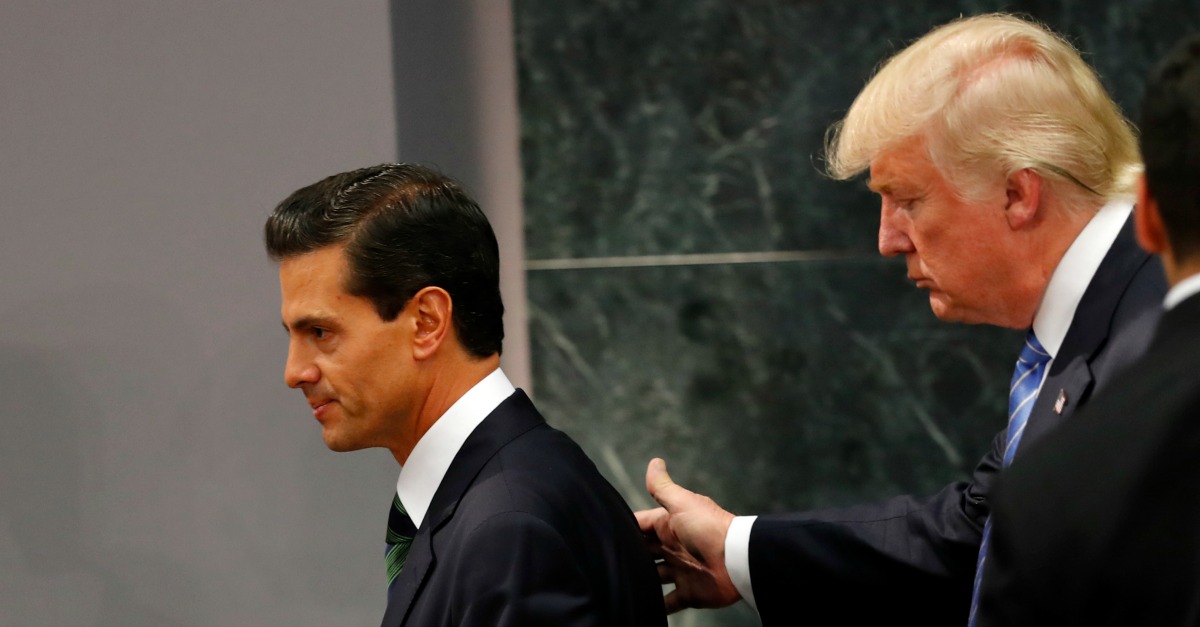 The AP is reporting that Sean Spicer informed reporters that President Trump is considering a 20 percent tax on Mexican goods as a way to fund his Mexican border wall.  Though Trump has insisted throughout his presidential campaign that “Mexico will pay” for any such project, this move would ensure that it is Americans who will suffer the costs as they are forced to pay extra on Mexican goods coming into the country.

Throughout his campaign, Trump’s rhetoric has constantly demonstrated a fundamental misunderstanding of the very nature of trade. While Trump constantly refers to trade in militaristic terms with “winners and losers,” free trade is always beneficial for both sides. While Trump has frequently harped on the “trade deficit” America runs with nations like Mexico, as Jonathan Newman explained recently, they aren’t something to be feared:

You should be just as worried about US trade deficits with other countries as you are about your trade deficit with your favorite grocery store, which is not at all. “Trade deficit” is one of the worst terms in economics because it sounds so much like a budget deficit.

Imagine an international border between you and your grocery store. Tons of money flows in one direction and tons of food flows in the opposite direction. Is this cause for concern? You have a massive trade deficit with your grocery store, but nothing seems to be wrong or dysfunctional. Quite the contrary — the trading makes you much better off. Making the groceries more expensive or making it harder to trade with your store can only hurt.

So should Trump follow through with this tariff, what goods can Americans expect to pay higher prices on?

In 2015, some of the top manufactured goods included:

America also imported a great deal of agricultural, food and beverage goods including:

American producers who use food, vehicles, electronics and medical instruments imported from Mexico (such as restaurants, couriers, medical firms, and any company that uses automobiles) will now have higher costs, produce less, and hire fewer people — all the while increasing prices. American consumers and workers will suffer accordingly. The only ones who benefit will be the tiny minority of Americans who compete with Mexicans for manufacturing jobs, and those who sell to them.

Everyone else will see a decline in real wages as costs rise.

Earlier in the week, Trump had taken promising steps by rejecting the bloated government-managed Transpacific Partnership. Though TPP was defended by many trade advocates, as has been noted by various Mises Wire contributors in the past, government managed trade deals like TPP include a number of various government interventions designed to bolster special interests, and shouldn’t be confused for actual free trade.

Unfortunately, today’s news is a sign that Trump will act upon the worst parts of the protectionist agenda he campaigned on.

Tho Bishop is the Social Media Director for the Mises Institute. This originally appeared at Mises.org. Follow Tho on Twitter at @ThoBishop