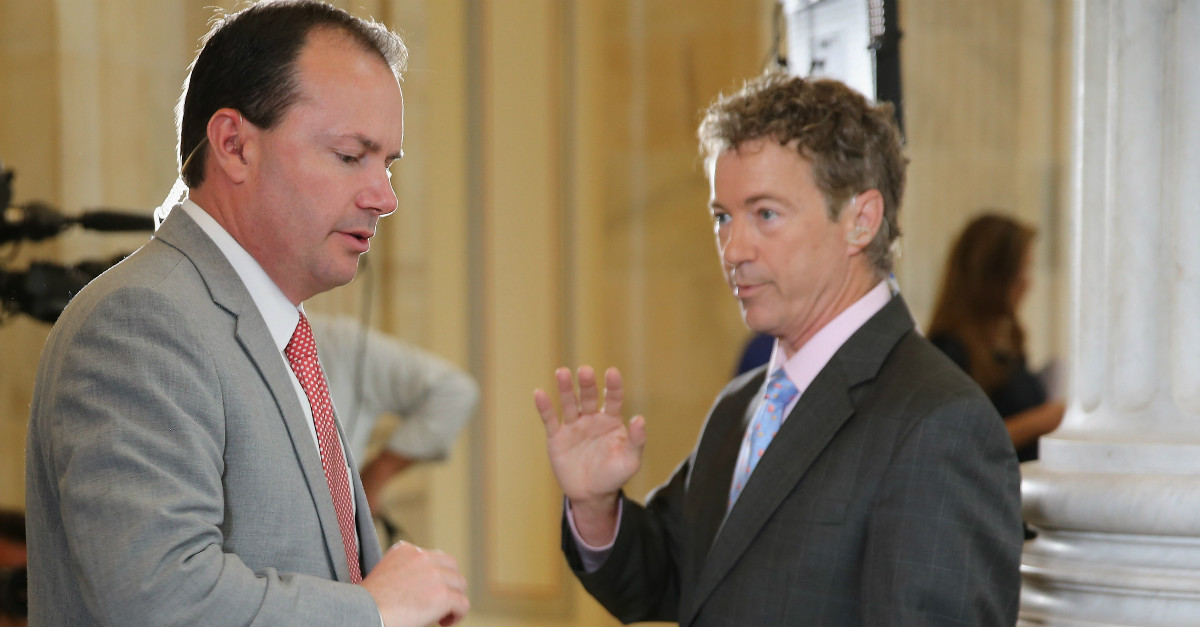 Photo by Chip Somodevilla/Getty Images
WASHINGTON, DC - JUNE 01: U.S. Sen. Rand Paul (R-KY) talks with U.S. Sen. Mike Lee (R-UT) (L) in between television interviews in the Russell Senate Office Building rotunda on Capitol Hill June 1, 2015 in Washington, DC. In protest of the National Security Agency's sweeping program to collect U.S. citizens' telephone metadata, Paul blocked an extension of some parts of the USA PATRIOT Act, allowing them to lapse at 12:01 a.m. Monday. The Senate will continue to work to restore the lapsed authorities by amending a House version of the bill and getting it to President Obama later this week. (Photo by Chip Somodevilla/Getty Images)

Senators Rand Paul and Mike Lee have been two of the most outspoken members of congress insisting that President Obama obey the Constitution in regard to foreign policy, including declaring war. Obama has a bad record on this front, preferring questionable executive orders over proper constitutional procedure.

Now, Paul and Lee want President Trump to do much better.

In a joint letter to the President-elect, Paul and Lee write, “As you begin your administration, we hope that you will work closely with Congress to determine and implement foreign policy and security strategies that have broad support from the American people.”

“The constitutional powers to carry out this duty are shared between the President and Congress so that our military and diplomatic policies are informed by a long-term vision of American interests ? forged through the kind of open debate and patient deliberation that is the province of Congress ? while remaining flexible enough to respond to threats as they appear,? the letter reads.

“The complexity of the security questions we face as a nation calls for robust debate, prudence and cooperation. The challenges are too great and the risks too high to simply defer to yesterday?s status quo. Now is the time for bold leadership and sober judgment,” the letter continues.

The Hill observed of Paul and Lee, “The two GOP senators have also broken with their party on some foreign policy fights. Lee partnered in 2015 with Democratic Sens. Joe Manchin (W.Va.), Tom Udall (N.M.) and Chris Murphy (Conn.) to call on President Obama to end the train-and-equip program for Syrian rebels.”

“Paul and Lee added in their letter that an uptick in military operations, including a no-fly zone or increasing the number of troops, in the Middle East or northern Africa should only take place after ‘formal authorization by Congress,” The Hill notes.

Paul and Lee also see the need to revisit Authorization for Use of Military Force (AUMF) powers, used liberally by both Presidents Obama and George W. Bush. “We further believe that you should work closely with Congress to review, reform or repeal the 2001 and 2002 AUMFs,” Paul and Lee say in the letter.

Paul and Lee advise Trump, “You have an opportunity at the beginning of your presidency to help recommit the Executive Branch to preserving this constitutional balance that has always defined our government at its best, and we stand ready to work with your administration toward that end.”

Read the senators’ letter in its entirety here.

Disclosure: I co-authored the 2011 book The Tea Party Goes to Washington by Sen. Rand Paul.