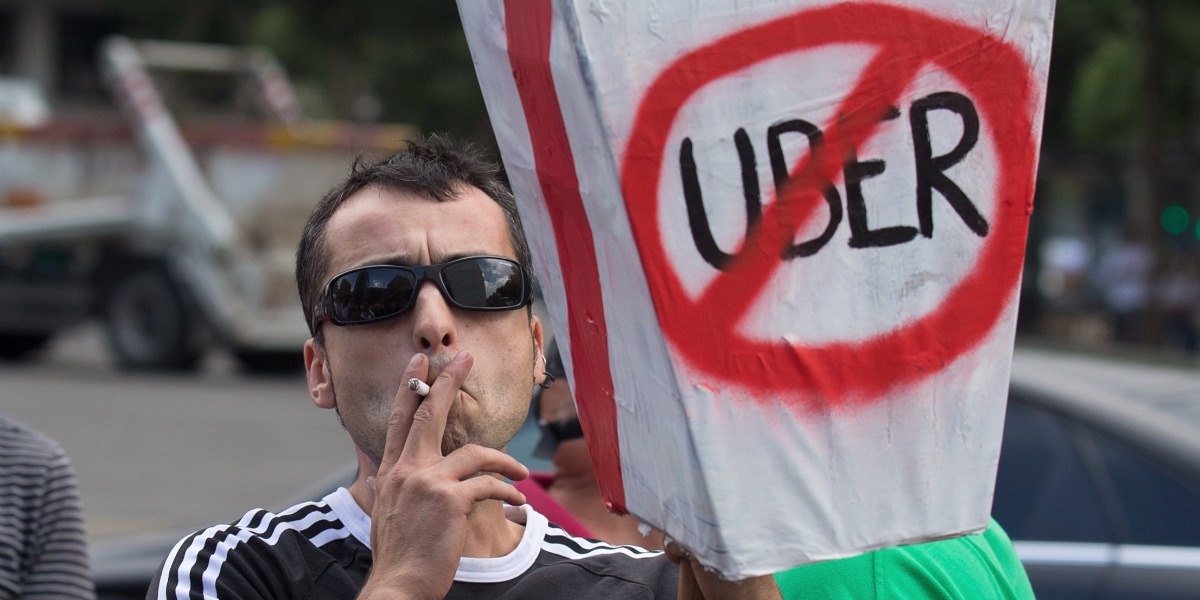 AP Photo/Paul White
In this photo taken on June 11, 2014, a taxi driver protests against Uber during a 24 hour taxi strike in Madrid, Spain. In a statement Saturday July 22, 2017, the city of Madrid has asked Spain's anti-trust watchdog to investigate whether Uber's new airport transport service violates fair competition laws saying tariffs may violate several articles of the Law of Unfair Competition and consumer rights if they are below the cost of providing the service. (AP Photo/Paul White)

20,000 taxis poured into Madrid from across the country, blocking traffic in an attempt to convince the government to impose more stringent restrictions on ride-sharing apps after a Spanish Supreme Court ruling granted 80 new cab licenses to Uber and Cabify drivers.

Uber originally operated in Spain in much the same way that it does in the United States; facilitating connections between riders, and drivers who own their own vehicles and operate without government licenses.

After the Spanish government, under pressure from the taxi unions, banned Uber for “unfair competition” in December of 2014, the California-based tech company chose to comply, pulling out of the market before returning over a year later with a compliant service employing professional, licensed drivers.

Unfortunately for Uber, this step wasn’t enough to satisfy the taxi unions, one of which complained, through a spokesperson, that Uber’s drivers “can work with an authorization that costs €36 while for a traditional taxi driver it’s more like €150,000 [over $178,000 at press time].”

When a taxi license can cost as much as a house, it’s clear that the industry—which, unlike engineering or medicine, requires very little in the way of special skills or expertise—is being controlled by a cronyist cartel bent on serving themselves, not the public interest.

As a graduate student, my schedule does not allow me to work full time, forcing me to cobble together a living out of part-time jobs. Driving for Uber, which provides me with a significant portion of my income, offers the flexibility I need to avoid getting either evicted or expelled.

Now, imagine if I were a Spaniard. I would be facing an even tougher job market than I face in America, and working as a non-professional, part-time Uber driver could help Spanish Grayson support himself. Instead, thanks to the insurmountable barrier to entry erected by the own-ass-covering unions and their government regulator cronies, I would have to remain unemployed, forcing me onto the public dole.

Uber understands this problem perfectly, and has responded to Spanish regulations with blog posts that criticize the “artificial cap on the number of professional driving licenses,” pointing out that “[a]t a time when Spain’s unemployment rate is above 20 percent (and 50 percent among young people), these regulations… restrict the number of economic opportunities.”

If the Spanish government wants to improve transportation services and create jobs for its citizens, it needs less taxi regulation, not more.