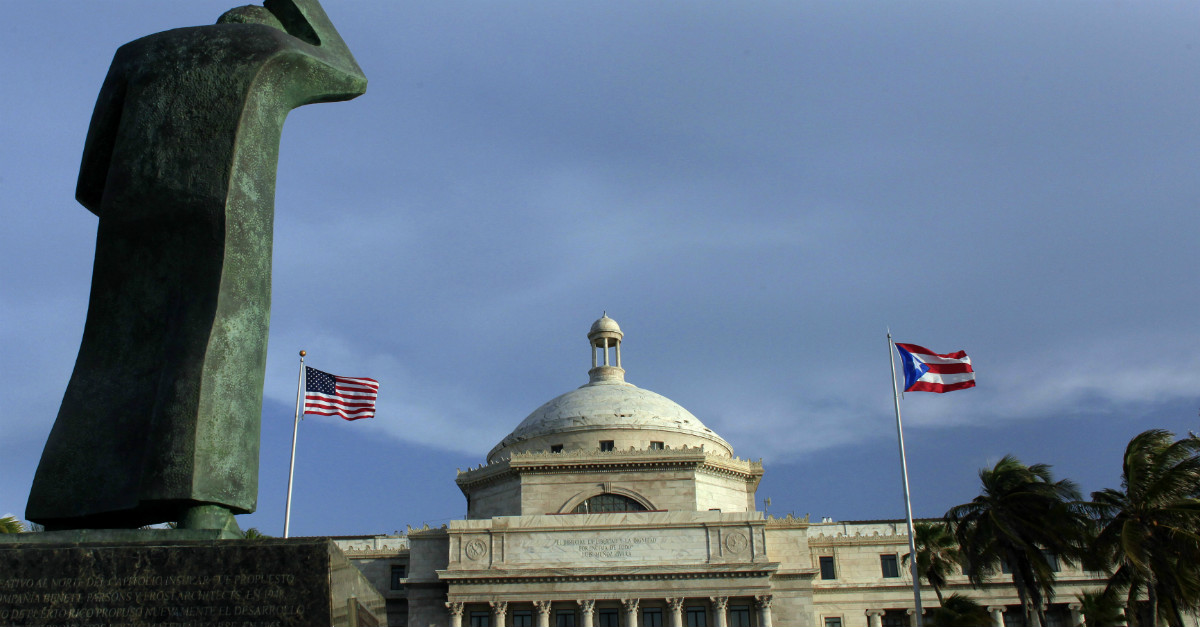 AP Photo/Ricardo Arduengo
In this July 29, 2015 file photo, a bronze statue of San Juan Bautista stands in front of Puerto Rico’s capitol flanked by U.S. and Puerto Rican flags, in San Juan. A federal control board on Friday, Sept. 30, 2016, took over Puerto Rico's finances and several government agencies for the first time in the U.S. territory's history in a bid to haul the island out of an acute economic crisis. (AP Photo/Ricardo Arduengo, File)

On Sunday, Puerto Rico once again voted for statehood, with 97 percent of its population saying yes in a non-binding referendum. However, only 23 percent of registered voters turned out to the polls, as opposition parties declared a boycott. Usually, Puerto Rican elections have turnout rates of around 80 percent.

Currently Puerto Rico has a special status with the United States. Puerto Ricans have been American citizens for around a century. The island is mostly self-governing with regards to its domestic policy and its residents do not pay federal income taxes on money made locally. But Puerto Ricans do receive some federal benefits such as food stamps and public housing vouchers, and they can serve in the U.S. armed forces. Puerto Rico has one member of Congress, but she doesn’t vote, and neither do Puerto Ricans vote in American presidential elections.

Despite the low election turnout, Puerto Rico’s government indicated it would use the referendum results to make a push for statehood. “From today going forward, the federal government will no longer be able to ignore the voice of the majority of the American citizens in Puerto Rico,” said Puerto Rican Governor Ricardo A. Rossello in a televised speech after the election.

RELATED: What in the world is happening in Puerto Rico?

There are several reasons why Congress should resist the temptation to admit Puerto Rico as the 51st state. The first is that the referendum was clearly a sham. It went forward without the support and funding of the U.S. Justice Department, and one of Puerto Rico’s opposition parties complained to the DOJ that the ballot choices were misleading. To grant Puerto Rico statehood would effectively disenfranchise the vast majority of Puerto Ricans who did not participate.

The second problem is that Puerto Ricans are culturally different than most Americans. Take for example the language. In Puerto Rico, both English and Spanish are the island’s official languages, but residents overwhelmingly speak Spanish. According to a recent study, only 20 percent of Puerto Ricans speak English fluently.

There is also the fact that in international competitions, Puerto Rico has become accustomed to having its own representation, with its own Olympic team, baseball team and soccer team.

Finally, there’s the matter of Puerto Rico’s anemic economy. The island recently declared bankruptcy. If it’s admitted to the union, it would have a per capita income half that of Mississippi’s, which is currently the poorest state in the union. Its financial condition has been compared to that of Greece. The island would inevitably have to be propped up by the rest of the states and the federal government, which are already nearly $20 trillion in debt. Right now, America simply cannot undertake the type of state-building that would have to be done to bring Puerto Rico level with the rest of the country.

Instead Puerto Rico should become an independent nation in free association with the United States, with America still responsible for its defense. It would receive economic aid and Puerto Ricans would remain eligible for certain U.S. federal programs. The agreement would be similar to the Compact of Free Association that America has with the Federated States of Micronesia and the Republic of the Marshall Islands in the Pacific.

Puerto Rico may have voted for statehood, but it is nowhere near ready for statehood. An independent Puerto Rico that remains closely intertwined with America is the better solution.