Rand Paul: “I don’t think ‘ObamaCare-lite’ is what we should do” 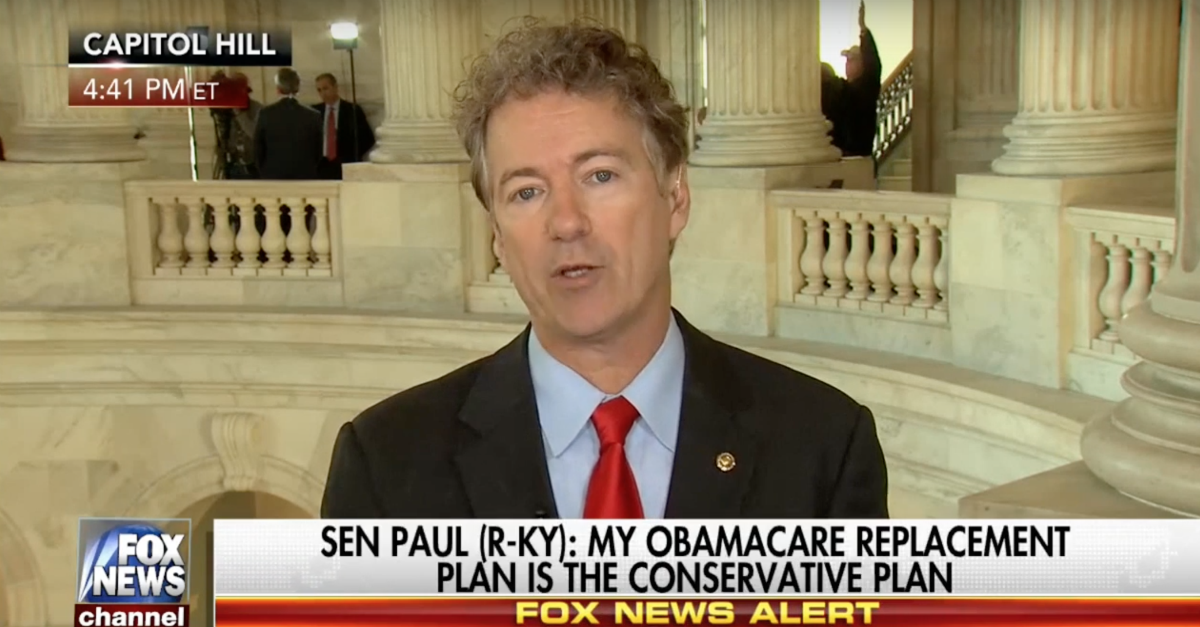 As Republicans continue to debate over repealing and potentially replacing the Affordable Care Act, Sen. Rand Paul (R-Ky.) and Rep. Mark Sanford (R-SC) held a joint press conference Wednesday to introduce the House version of their Obamacare Replacement Act, a plan that has won the support of the conservative House Freedom Caucus. Sanford’s bill is the House companion plan to Paul’s Senate legislation.

“I think the replacement plan that we’ve put forward is now the conservative plan, and the House Freedom Caucus has endorsed it,” Sen. Paul told Fox News Neil Cavuto Wednesday.

“It’s being introduced by Congressman Sanford of South Carolina, and basically it does three things, Paul said. “It legalizes the sale of inexpensive insurance, that means it gets rid of the Obamacare mandates that added expense to insurance. It also expands health savings accounts so people can save to buy their insurance, to pay their deductible, to have weight loss, exercise, vitamins, preventative care or whatever you want in an HSA, and it also lets individuals join in association so they can get leverage to get cheaper price.”

“The goal is to insure the most amount of people at the least amount of cost,” Paul said.

Rep. Sanford previewed his plan in an op-ed at Rare on Tuesday where he also emphasized the same aspects of the legislation.

Cavuto asked Paul is Republican leadership have been resistant to his plan, as some have reported.

“I would say that the Republican establishment position is, is that they’re going to keep parts of Obamacare. I don’t think ‘Obamacare-lite’ is what we should do,” Paul said.

The senator continued, “The House was elected Republican in 2010, the Senate in 2014 and then the White House in 2016 on a promise that we would repeal Obamacare — root and branch — and I think we should do it.”

“But let’s not have another big government program or keep any bit of Obamacare,” the Kentucky senator insisted.

Cavuto then asked if House Speaker Paul Ryan had given Paul and Sanford’s plan a cool reception.

“I got the perception that many people think that they’ve decided without the rest of us. And my point was that conservatives are on board,” Paul replied. “We said we were for the repeal we passed a year and a half ago, two years ago. The last time we voted on Obamacare repeal, we voted to repeal as much of it as was legally possible. That’s what most of the conservatives are for now.”

“The House Freedom Caucus voted to say that their caucus — the official position of all 40 members — is that they’re not for ‘Obamacare-lite,’ they’re for repealing the whole thing” Paul added.

“And so, my message to the speaker was, I think he’s going to need to talk to the conservatives. My message to the Senate Republicans, they need to not ignore Senate conservatives,” Paul told Cavuto. “It’s a very narrow margin, and I don’t want to get to the last minute where something gets shipped over from the House that has ‘Obamacare-lite,’ and they’re saying ‘That’s all you get, you can’t amend it — you either vote for it or you’re a renegade.”

“Why are we now weak-kneed and saying we’re not going to vote for the whole thing?” Paul asked.

Sen. Rand Paul: It’s time to rein in the FDA