Rand Paul is right about the border wall being too expensive, and it might not even work 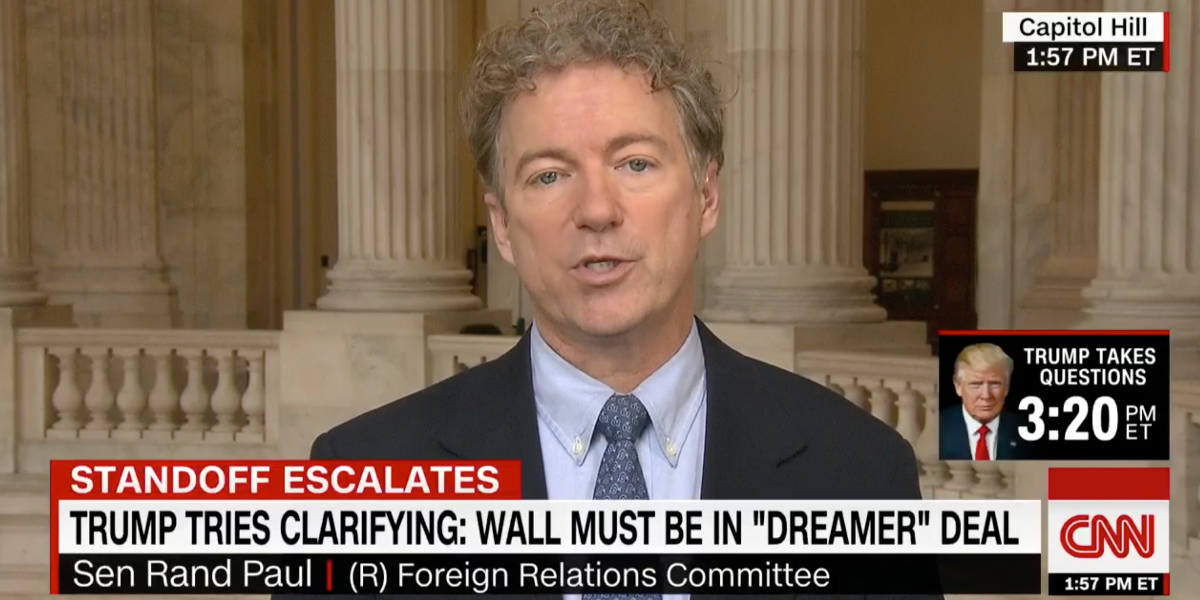 Sen. Rand Paul (R-Ky.) has often been accused of being President Donald Trump?s lackey, yet he?s one of the few men in Washington who hasn?t proven to be a ?yes man.? His latest comments about one of Trump?s signature 2016 promises proves just that.

Appearing on CNN?s Situation Room with Wolf Blitzer on Wednesday, Paul said, “I remain a fiscal conservative, even on the wall, so I?m not excited about spending $20, $30, $40 billion on a wall.”

“I?m still a believer that we don?t have money to spend. We?re $700 billion in the hole,? Paul added.

However, Paul is not against all forms of keeping illegal immigrants out.

Paul on Trump's proposed border wall: "I remain a fiscal conservative even on the wall … I'm still a believer that we don't have money to spend" https://t.co/SFuI1PhXhG

Paul?s resistance to voting for the border wall indeed comes at a time when the United States is $20 trillion in debt.

What the border wall might cost still isn?t concrete. According to TIME, it could cost $70 billion, but if you ask the U.S. Department of Homeland Security, it?s $21.6 billion. Other estimates say $15 billion to $25 billion.

No matter how you swing it, it?s still billions of dollars out of taxpayer pockets to construct it, and then hundreds of millions every year to maintain it. And this comes at a time when our national debt is still rising ever-higher by the minute; debt Paul would rather not add to.

This is especially relevant since building the wall isn?t necessarily a guaranteed way to keep illegal immigrants out. Many people who are now in the United States illegally came here first legally. In 2006, Pew Research Center found that many who are undocumented in the country came here with visas, let them expire, and simply didn?t go home.

The exact number of those who overstay is hard to nail down, but crunching the numbers for what was available, Pew deduced that ?the estimates suggest that out of an unauthorized population of 11.5 to 12 million, some 4 to 5.5 million or between 33% and 50% are visa overstayers.?

Furthermore, while the wall may keep out those seeking to walk across the border, it doesn?t stop anyone from tunneling underneath it, which Border Patrol agents say is a big problem according to the Cato Institute.

If not over or through, some crossers may opt to go under. Tunnels are typically used more for drug smuggling, but they still create a significant vulnerability in any kind of physical barrier. From 2007 to 2010, the Border Patrol found more than one tunnel per month, on average. ?For every tunnel we find, we feel they?re building another one somewhere,? Kevin Hecht, a Border Patrol tunnel expert, told The New York Times last year. A wall would likely increase the rewards for successful tunneling as other modes of transit grow more expensive.

Cato also noted that the wall’s opacity is something that could prove to be a massive problem. Border Patrol agents actually see rock or concrete walls as a hindrance to their jobs as it stops agents from seeing the movements of illegal immigrants attempting to cross. It’s better for agents to see them and react accordingly rather than being completely blind to them until it?s too late.

These are just some of the reasons that any amount of billions of dollars thrown at a wall that might not work seems like a bad investment.

The question of border security is definitely one to be addressed, and some investment in better technologies and more border agents may be warranted. However, no wall will stop overstayers, tunnelers, or anyone with enough will and ingenuity.

Paul?s take on wall spending should be heeded.