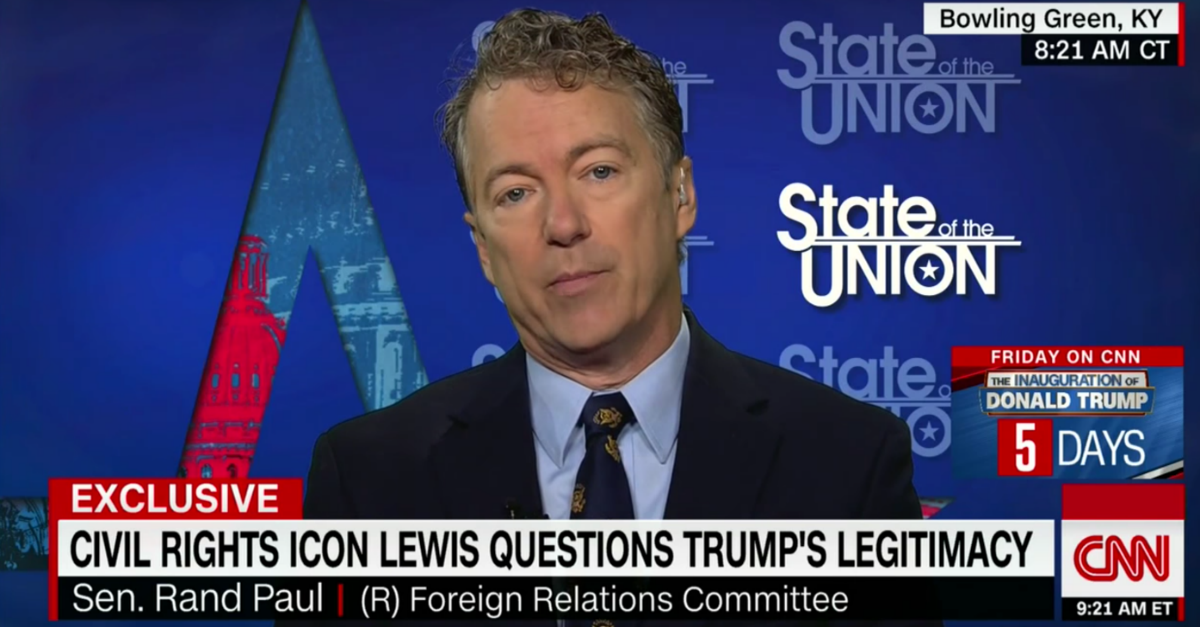 When congressman and civil rights icon John Lewis questioned the legitimacy of Donald Trump’s presidency in an interview with NBC on Friday, the president-elect characteristically responded harshly via Twitter, even questioning how well Lewis had served his constituents. The spat carried on into Sunday morning’s news shows.

On CNN, Sen. Rand Paul was asked his opinion on the controversy. “I do appreciate him being a civil rights icon, but I would also say that that doesn’t make us immune from criticism or debate,” Paul said on State of the Union.

“So John Lewis isn’t in a position where there can’t be a healthy debate back and forth. Because he’s a Civil Rights icon shouldn’t make him immune.”

RELATED: John Lewis tells ?Meet the Press? he would not invite Donald Trump to visit Selma

None of us actually want to be considered to be the racially insensitive and so it’s a very, very important subject, but I think we shouldn’t ignore that people are partisan. So John Lewis is a partisan. I have a great deal of respect for him, but he’s a partisan and I disagree with him on issues. I should be able to honestly disagree with him and not have it all come back to I have no appreciation for a Civil Rights icon because of this.

Whether or not one agrees with Lewis or Trump in their argument, in part or whole, Paul makes an important point.

John Lewis is a Civil Rights hero and deserves all the accolades and respect he has been given for many years.

But he is also a Democratic congressman and therefore, as Paul notes, a partisan. Lewis has political opinions. They are subject to scrutiny.

That’s how it works.

While I think it’s embarrassing that the next President of the United States has to respond on social media to seemingly every criticism, the act of criticizing Lewis’ statement itself is not unbecoming, whether it comes from Trump or anyone else.

I thought it was demeaning to his own legacy when Rep. Lewis led a congressional sit-in in June to force a vote on gun control. The legislation Lewis was pushing was opposed by not only Republicans but the left-friendly American Civil Liberties Union.

Was the ACLU unnecessarily insulting Lewis by opposing his political agenda? (It’s also worth noting that the ACLU’s opposition was based on basic civil liberties — or rights — grounds).

Lewis’ sit-in was a political act that deserved political criticism. It was not an attack on Lewis, his earlier struggles and everything he’s done for black Americans and the country.

According to some of my Atlanta metro-area friends who live in Lewis’ 5th congressional district, Trump was way off base describing the conditions there as deplorable or crime-ridden. But whether or not Lewis has done a good job, or whether or not Trump is wrong in his criticism, is an entirely different subject than saying a sitting congressman is somehow above being criticized at all.

Disclosure: I co-authored the 2011 book The Tea Party Goes to Washington by Sen. Rand Paul.