As a black Republican, Rand Paul leaving the race is a huge loss 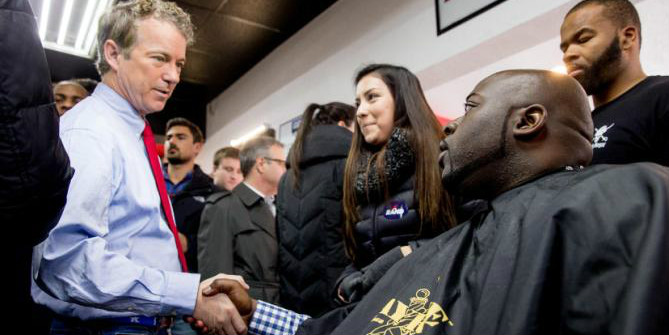 When I joined the GOP in 2012, I did so because I wanted to help change the party. I wanted to bring more minorities into the GOP fold.

This is why I supported Rand Paul in this election.

Paul was always the only Republican willing to do something that really shouldn’t be a novel idea: Go to non-traditional communities, black, brown, Asian, young people, with the same principled and unwavering message. Go to minority neighborhoods and communities to talk about criminal justice reform, school choice and economic empowerment. Talk about how big government hurts minorities too.

Ask for their vote. It’s not hard.

Unfortunately, it’s still not being done.

I was heartbroken when Rand Paul announced last week that he was suspending his presidential campaign. Him leaving meant more than just losing my preferred candidate.

It meant losing the only person who really seemed to care about outreach in the Republican Party, matching his words with action in the U.S. Senate.

It was a blow to the kind of change I want to see so badly in my party.

After Paul, Ted Cruz had long been my second choice. But now Cruz seems to have backed away from his earlier willingness to pursue criminal justice reform.

Rand Paul’s willingness to get rid of the draconian mandatory minimum laws attracted African Americans and other groups who would’ve never given a Republican a chance.

With Rand out of the race, that narrative is gone.

In the last debate he was in, Paul was the only candidate on stage to even address the issue of police brutality in a way that would appeal to minorities eager for reform.

Rand was really the only one who could’ve even spoken on the issue with any kind of real knowledge or authority.

I fear these kinds of important conversations within the Republican Party, at least on the national stage, have shifted and I worry won’t come back anytime soon.

On a local level, I’m carrying on. I am a precinct chair for my county’s Republican Party in Dallas and regularly collaborate with local minorities in the conservative sphere. We work each day to increase diversity in the GOP and bring a liberty-minded message to everyone.

My hope is that spreading the liberty message to non-Republican voters in minority communities does not end with Sen. Paul’s exit from the 2016 presidential race. If the party wants black votes, other Republicans should follow Rand Paul’s lead.

As it currently stands, none of the other candidates even come close.

About the author: Antonia Okafor
Antonia is a graduate student at The University of Texas at Dallas and a Republican precinct chair in Denton County, Texas. Follow her on Twitter @antonia_okafor
View More Articles