Be thankful for the freedom to disagree, even if its expression is offensive 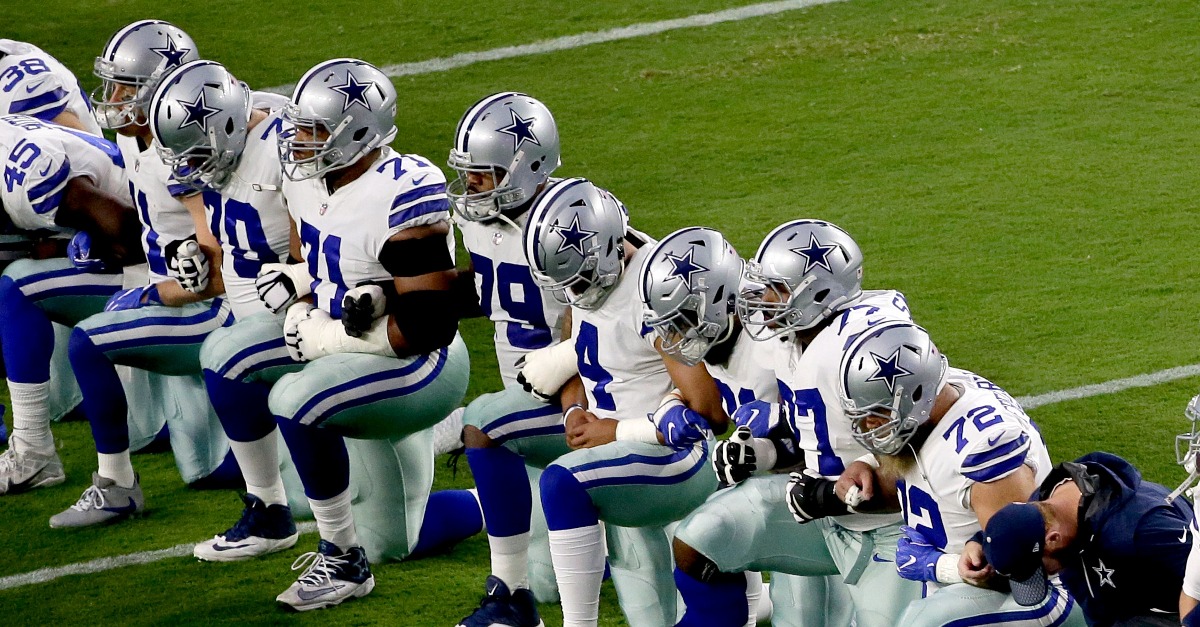 Unless you were hiding under a rock last weekend, you probably heard about the controversy surrounding patriotism, the National Anthem, the flag the president and the NFL.

“Wouldn’t you love to see one of these NFL owners, when somebody disrespects our flag, to say ‘get that son of a bitch off the field right now? Out! He’s fired! He’s fired’,” said President Donald Trump at a Friday rally in Alabama.

Immediately, celebrities, athletes, politicians, online keyboard warriors, and football fans alike began battling about his statement and the message it sent. Many believed the president had once again gone too far by harshly criticizing those whose opinions don’t align with his own. Others were thankful he’d called out ungrateful players such as Colin Kaepernick for kneeling to protest the pre-game anthem. The hashtag #TakeTheKnee was created and just like that, another outrage cycle was born.

Both sides of the NFL controversy are frustrating for entirely different reasons.

RARE POV: Refusing to stand for the National Anthem doesn’t unify anyone

Protest supporters believe such public demonstrations from professional athletes bring awareness to instances of police brutality and silently remind viewers that racial division is a very real problem in America. Trump’s supporters can’t comprehend how football players, clearly privileged in many ways, could disrespect the nation that has handed them so many opportunities.

As with many things, the truth is somewhere in the middle.

I despise behavior that disrespects both the meaning behind the flag and those who have sacrificed so much to protect it. Freedom is costly. We owe it to the living and the dead to honor them in this small way. But we can’t also remark on the cost of freedom without mentioning that it protects those who have entirely different viewpoints. Americans who fought on distant shores did so just as much for those who stand opposite to me ideologically as for those who agree with me. That is the beauty of the rights we too often take for granted.

While aspects of both sides of this debate are troubling, I recognize that the very existence of opposing ideas is a positive thing that makes for a robust and free society. That can’t be said for many other nations around the world. It’s a privilege that we’ve become so accustomed to enjoying that at times its exercise can alarm us.

It’s worth noting that until very recently, the NFL was much maligned by those who lean liberal. “Toxic masculinity” and concussion-related CTE (chronic traumatic encephalopathy) caused many on the left to look down on professional football as both dangerous and worthy of derision. However, once President Trump went off-script and commented on player behavior, a new wave of support for NFL athletes suddenly emerged, showing just how political sports have become.

I won’t be boycotting the NFL; I would have to be a regular viewer to begin with for that to occur. But as an observer, I can plainly see that we should be thankful for the intellectual diversity that freedom affords even if it offends us.