Christians and Muslims should team up to preserve religious liberty 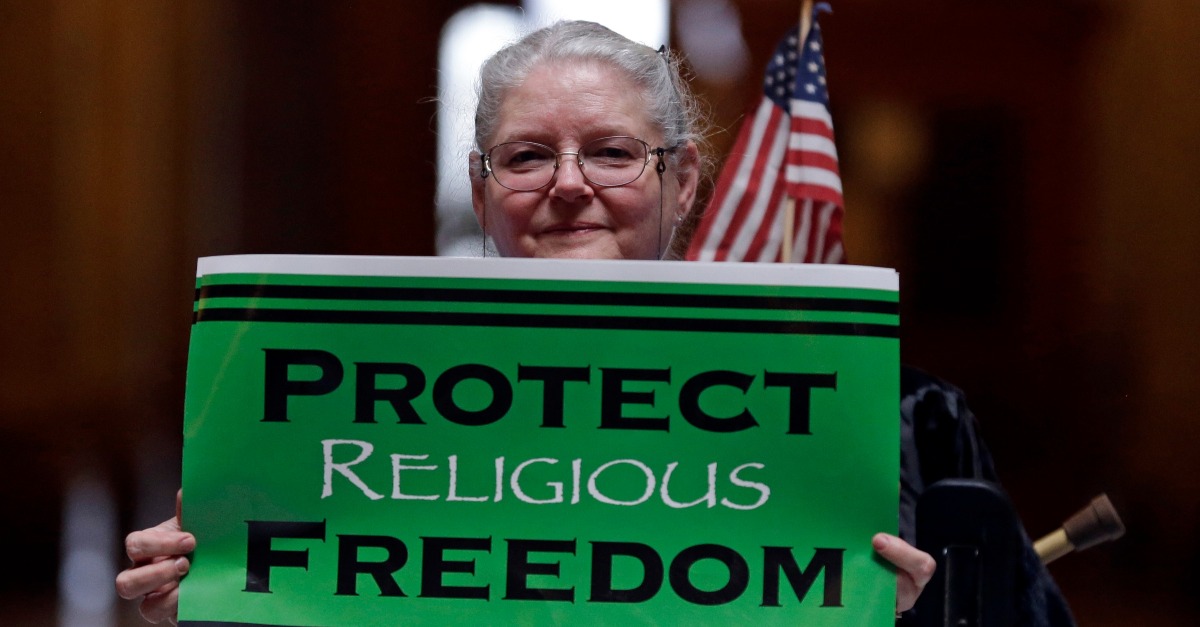 AP Photo/Michael Conroy
Condy Holmes of Mechanicsburg, Ind. holds a sign a rally at the Statehouse in Indianapolis, Monday, April 27, 2015 against the revised religious freedom legislation. The group of conservative religious leaders is rebuking Gov. Mike Pence and the leaders of the Republican-dominated General Assembly for changes to Indiana's religious objections law that they claim threaten religious liberties.(AP Photo/Michael Conroy)

Steve Tennes is an orchard owner in Michigan. He frequently sells his produce at a local farmers’ market about 20 miles away, yet this summer, the city of East Lansing prohibited him from doing so. His crime? Refusing to host a same-sex wedding on his property.

The Tennes family holds a traditional Christian belief that marriage is a union between a man and a woman. When approached by a same-sex couple in 2014, Tennes refused to host the wedding, instead referring them to a different orchard that would provide the service. While it is entirely legal in the state of Michigan for business owners to discriminate on the basis of sexual orientation, East Lansing has an ordinance that prohibits this practice. So Tennes sued the city on the grounds that it was violating his religious freedom. The case is ongoing.

Similar issues of religious liberty are popping up all over the country, particularly around the issue of same-sex weddings. Yet it isn’t just Christians who face challenges to the exercise of their religious beliefs. Muslims, too, are fighting for their right to uphold their religious tenets in the public square.

In 2014, for example, a young Muslim woman was denied a job at Abercrombie and Fitch because her decision to wear a hijab violated the company’s dress code (she was not informed of this policy at the time of her application). The Supreme Court ruled in her favor 8-1, arguing that allowing the hijab was a reasonable accommodation that the business has a responsibility to provide. In 2013, two Muslim truck drivers were fired for refusing to transport alcohol, citing strong religious objections — ultimately, a jury ruled in their favor.

Though these examples may seem wildly different from same-sex weddings, the issue at hand is the right of individuals to follow conscionable convictions that cause no systemic, demonstrable harm to the state or its citizens (this standard of “compelling interest” was codified in the 1993 Religious Freedom Restoration Act). Those who are religious have long defended this right, though the benefits have often extended to all citizens. Note as an example the 1994 law protecting federal and state officials from attending or participating in an execution “if such participation is contrary to the moral or religious convictions of the employee.”

It’s time to forge a new alliance. Muslims are the most ethnically diverse non-Christian religious group in America today and are projected to grow in population in the future; they have increasing political clout as a group. Christians would do well to recognize that they and Muslims share a strong interest in preserving their liberty to robustly uphold their religious convictions.

A study conducted in January by the Institute for Social Policy and Understanding indicates that Muslims are significantly more likely than other religious communities to experience religious discrimination. They are as many as four times more likely to report that their children have been bullied at school than the general public, and a quarter of these incidents involve a teacher or school official. Despite these challenges, increasing numbers of Muslims are running for local offices and holding public positions. These new political leaders bring energy and drive to fighting religious discrimination and protecting the freedom of conscience at every level of society.

RARE POV: Libertarians must stand up for religious liberty

Groups like the Muslim Public Affairs Council (MPAC), the Council on American-Islamic Relations and Muslim Advocates channel the political energy of American Muslims and do substantive policy work focused on freedom of religion. MPAC, for example, released a piece earlier this summer denouncing an executive order that effectively allows tax-exempt houses of worship to endorse or oppose a political candidate or party. With churches and mosques becoming more and more politically contentious, MPAC argues that allowing houses of worship to participate in campaign fights could put potentially dangerous political pressure on religious activities.

On this issue – and on many others – there is a strong possibility for positive collaboration between Christians and Muslims. It is past time for Christian political activists to enter into meaningful partnerships with other religious groups as part of their work to preserve liberty. It isn’t just Christians who will benefit – we all will.

About the author: Emily-Lynn Warren
Emily-Lynn Warren is a member of the William Penn Honors Program at George Fox University. She is currently serving as Mark David Hall’s research assistant for his book on religious accommodations.
View More Articles