As she plunges in the polls, Britain’s prime minister shows she’s no Margaret Thatcher 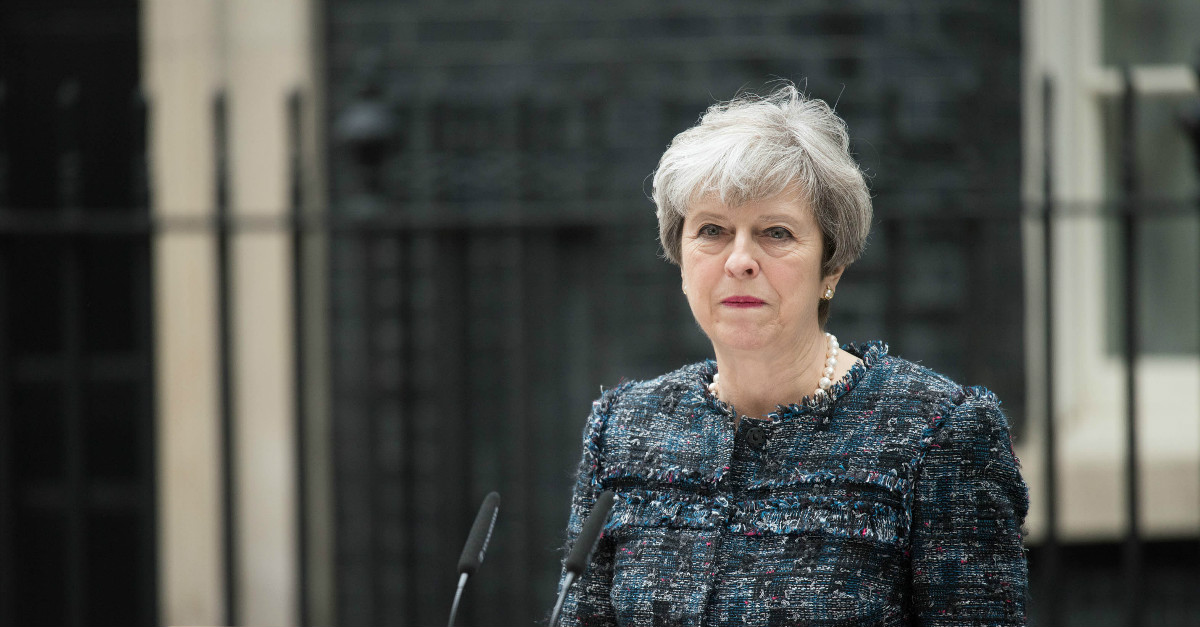 KGC-247/STAR MAX/IPx 2017
Photo by: KGC-247/STAR MAX/IPx 2017 5/3/17 Prime Minister of The United Kingdom Theresa May makes a speech outside Number 10 Downing Street after returning from Buckingham Palace where she asked permission from Her Majesty Queen Elizabeth II to dissolve Parliament in the wake of the upcoming General Election. (London, England, UK)

When British Prime Minister Theresa May called for snap elections on June 8, everyone was predicting she’d pull off a landslide victory. The UK’s Conservatives are surfing the wave of the aftermath of Brexit by consistently standing behind their promise to leave the European Union, something their political rivals have failed to do.

A YouGov survey from May 18 provided a clear analysis of the Brexit phenomena: 68 percent of the British electorate are now either leavers (initial supporters of Brexit during the referendum) or “re-leavers,” meaning those who insist on leaving on the EU now that the vote has taken place. That’s great for the Conservatives.

Still, despite their considerable lead in the polls, the Tories’ manifesto hasn’t appealed to voters. Quite the contrary: voters have been stirred up by a recent controversy regarding Conservatives’ plan to make elderly people pay more for their own social care. Labour Party leader Jeremy Corbyn has criticized Theresa May for this proposal and presented a manifesto titled “For the many, not for the few,” which promises to increase welfare spending, hike the number of holidays, and make university tuition-free.

RELATED: Britain’s Bernie Sanders is wrecking his own party

Corbyn has coined the term “dementia tax” in order to attack May’s plans for social care, sending a wave of upset through the elderly electorate. Foreign Secretary Boris Johnson had suggested that the Tories might ditch the policy altogether, while Work and Pensions Secretary Damian Green insisted that the course not be changed. The feuds within her own party and the risk of losing support led Theresa May to perform a U-turn, announcing that the caps on social care would be abandoned, while downplaying it to the press as a mere “clarification.” However, the damage seems to be done: in a recent Survation/Good Morning Britain poll, the Conservatives’ lead over Labour has dropped to single digits.

Not only are Conservatives inconsistent in their approach to governance, they aren’t very ideologically brave either. The Tory manifesto is weak on actual free-market reforms. Brexit could be an opportunity for Britain to chart a different course, reversing decades of Brussels over-regulation, especially when it comes to financial rules that have repeatedly hit London-City, Britain’s financial hub. When Chancellor Philip Hammond told the German newspaper Welt am Sonntag back in January that if the 27 EU member states were not ready to freely trade with the UK, his country would abandon a European-style social model and become a tax haven, he should have been serious about this threat. With Germany and France falling more and more into the public spending trap, the UK’s fiscal conservatism could make the island stand out amidst creeping European socialism.

RELATED: As voters turn against them, the left cries out for less democracy

May, while constantly being compared to beloved Conservative icon Margaret Thatcher, has done her best to reject that comparison. It often seems that she’s avoiding any connection to conservative advocacy: barely using the term “conservative” and running instead on a “strong and stable Britain,” her bet lies on Brexit. While Corbyn stays true to his socialist beliefs, Conservatives don’t have the honesty of their own convictions. Theresa May’s manifesto could be summarized like this: “We’re not really attempting to change anything…but don’t forget BREXIT!”

Let’s not be hasty in drawing any definite conclusion just yet. If the 2015 British election taught us anything, it was not to read too much into public opinion measurements, as polls favored Labour yet the Tories won in a landslide. However, Conservatives would be wise, instead of riding the centrist wave, to actually suggest a free-market future for Britain.