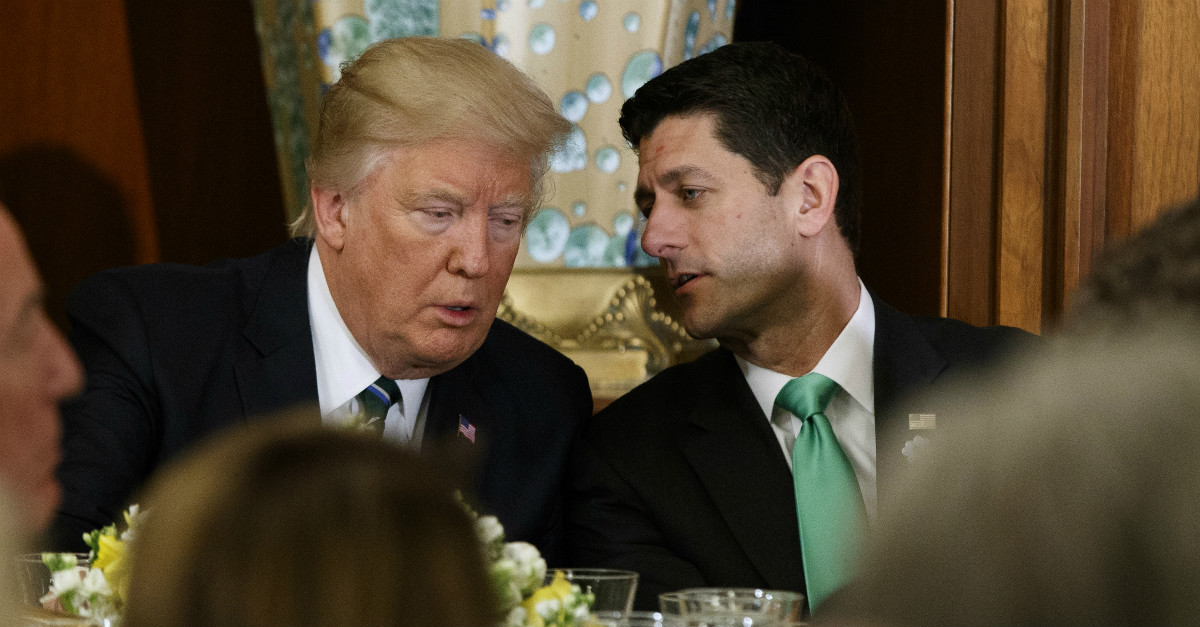 After the ObamaCare repeal and replace debacle last week, The Federalist’s Robert Tracisnki made an important observation:

We were supposed to support Trump because he was the guy who was finally going to break the corrupt Republican ‘establishment.’ Now he?s the guy launching tweet-storms on behalf of the establishment and against the House Freedom Caucus?the guys who actually did break the GOP establishment.

And all because the Tea Party movement brought a few dozen hard line small-government advocates into office, and the ban on earmarks helped them guard their independence.

Tracinski is right that it was the mostly Tea Party-elected conservatives and libertarians who make up the House Freedom Caucus who held the line against the establishment, while President Trump and Paul Ryan tried to browbeat them into going along with Washington business as usual.

Now Trump wants the House Freedom Caucus gone. If your mission is to “drain the swamp,” this makes absolutely no sense.

The president tweeted on Thursday:

The Freedom Caucus will hurt the entire Republican agenda if they don't get on the team, & fast. We must fight them, & Dems, in 2018!

So Trump wants to replace the most anti-establishment Republicans in Washington with… more establishment ones? Those more willing to go along to get along?

Surely Trump thought this whole buck-the-system thing through better than this?

Freedom Caucus co-founder Justin Amash did not hesitate to respond to the president on Thursday:

It didn't take long for the swamp to drain @realDonaldTrump. No shame, Mr. President. Almost everyone succumbs to the D.C. Establishment. https://t.co/9bDo8yzH7I

.@realDonaldTrump it's a swamp not a hot tub. We both came here to drain it. #SwampCare polls 17%. Sad! https://t.co/4kjygV2tdS

As Reason’s Matt Welch notes of the Freedom Caucus, “They were draining the swamp even before Donald Trump was getting into the birth-certificate forensics business.”

[T]he betting money is that both the Trump administration and the GOP establishment it now sits atop will seek actively to marginalize the rebels and instead find common governing cause with centrist Democrats, particularly in the United States Senate. If true, this scenario would produce one of the greatest cognitive dissonances in modern political history, while setting the administration up for even more humiliation during its honeymoon phase. Trump the above-the-fray outsider is collaborating with dealmaking career insiders to sideline one of the only principled Beltway blocs, even before showing any ability to woo Democrats over to Trump’s anti-conservative agenda. It’s all shaping up to be a godawful mess.

My hope for Trump was that he would significantly reshape U.S. domestic and foreign policy by challenging Washington consensus. Many conservatives and libertarians supported him precisely because he was anti-establishment.

My fear for Trump was that without an ideological center, whatever reformist tendencies he had would be smothered by a federal beast that swallows up most who challenge it.

“The very establishment he once railed against for being power-hungry sellouts have now sold themselves out to Donald Trump in order to retain power,” Welch writes. “And now both sides have joined up in trying to stamp out the last remaining principled deviants, who show little outward sign of giving a rip.”

Welch is right. Make no mistake: The best thing — the only good thing — to come out of the ObamaCare repeal-and-replace debate was the emergence of the House Freedom Caucus as an indomitable principled force.

“Almost everyone succumbs to the D.C. Establishment,” Rep. Amash tweeted Thursday. So far — not even three months into the new administration — Amash is right about this president.