Hollywood is denouncing Kevin Spacey, so why are Roy Moore’s defenders sticking with him? 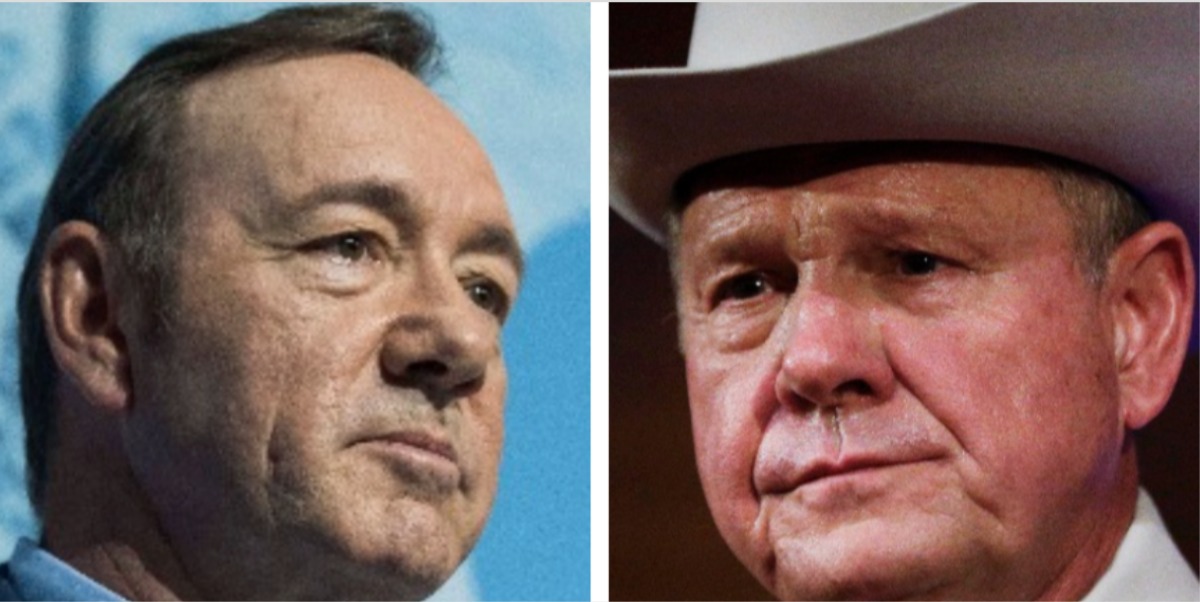 Photo: Serge Illin/ Pool Photo via AP/AP Photo/Brynn Anderson, File
U.S. actor and film director Kevin Spacey speaks during the 13th Yalta Annual Meeting entitled 'The World, Europe and Ukraine: storms of changes', organised by the Yalta European Strategy (YES) in partnership with the Victor Pinchuk Foundation at the Mystetsky Arsenal Art Center in Kiev, Ukraine, Friday, Sept. 16, 2016. More than 350 leaders from politics, business and society representing more than 20 countries will discuss major global challenges and their impact on Europe, Ukraine and the world. (Serge Illin/ Pool Photo via AP) FILE - In this Monday, Sept. 25, 2017, file photo, former Alabama Chief Justice and U.S. Senate candidate Roy Moore speaks at a rally, in Fairhope, Ala. According to a Washington Post story Nov. 9, an Alabama woman said Moore made inappropriate advances and had sexual contact with her when she was 14. (AP Photo/Brynn Anderson, File)

When actor Kevin Spacey was recently accused of sexually assaulting a 14-year-old boy in the 1980s, conservative site Breitbart covered the allegations, including similar charges that soon followed against the Hollywood liberal.

When ultra-conservative Republican candidate for U.S. Senate Roy Moore was accused of sexually abusing a 14-year-old girl last week, as reported by the Washington Post, Breitbart immediately attempted to discredit the accuser before the Post story was even published.

The allegations against Spacey are similar to those against Moore: Three to four decades ago, adult men of prominence allegedly attempted to push themselves sexually on minors, an act that is illegal in any state. Neither man allegedly had actual sex with their accusers. Both Spacey and Moore noted that these acts allegedly took place a long time ago.

Contrasting Breitbart?s treatment of both controversies, is sexual abuse really the concern? Why was a conservative outlet eager to advertise Spacey?s downfall and yet also eager to prop Moore up?

For the same reason Republicans in the 1990s couldn?t stop talking about the many sexual assault allegations against President Bill Clinton, while Democrats wished the controversy would just go away. For the same reason Democrats hammered Donald Trump throughout 2016 over his sexual assault allegations, while many on the right, including conservative evangelical leaders, defended Trump at every turn.

Both sides don?t care as much about accusations when it?s their guy who?s under fire.

Both controversies also bolster preconceived partisan narratives. The allegations against Spacey feed into what many social conservatives would like to believe about Hollywood and homosexuals: That Tinseltown is a haven for degenerates, particularly gay men who prey on children, while these shameless A-list liberals screech about morality from their awards show soapboxes.

Moore?s allegations feed into what many liberals want to believe about Republicans and conservative Christians: That the right is a haven for self-righteous hypocrites who preach family values and denounce homosexuality while behaving differently behind closed doors, including preying on kids.

Both sides are hypocritical in too many ways to count, but right now conservatives are actually doing something worse.

There are not scores of liberals defending Spacey, movie mogul Harvey Weinstein, comedian Louis C.K. or other members of the entertainment elite now accused of sexual harassment and abuse. The worst thing you can say about the Hollywood community on this front ? and you could say a lot ? is that too many turned a blind eye for too long to the worst kinds of sexual abuse.

But when this stuff has been thrust in their face publicly, as is happening now, most in Hollywood have denounced it.

Too many conservatives are doing the opposite concerning the Alabama Senate race. When Moore?s supporters learned that their candidate, as an adult man, might have groped a 14-year-old girl, in addition to three other women ranging in age from 16 to 18, some of the responses followed formulas such as: ?It was a long time ago;? ?Most of these girls were above the age of consent in Alabama, which is 16;? ‘The establishment is just trying to smear him;’ and the worst one: ?Well, Jesus was born of Mary, who was a teenager.?

These arguments, however valid or invalid, are not good responses from people who claim to be for family values. Hollywood at least knows to be outraged, however genuine or phony. Moore?s defenders don?t even seem to care.

Just answer this question: Would a single conservative defender of Moore be okay with a 32-year-old groping their 14-year-old daughter? Would those Alabamians be headed to the voting booth ? or the gun rack?

Perhaps the most proper conservative response to these allegations came from Republican Senator Mike Lee, of Utah, who had previously endorsed Moore: ?Having read the detailed description of the incidents, as well as the response from Judge Moore and his campaign, I can no longer endorse his candidacy for the U.S. Senate.?

Having read the detailed description of the incidents, as well as the response from Judge Moore and his campaign, I can no longer endorse his candidacy for the US Senate.

It really is that simple. Lee?s response is similar to how most in entertainment are responding to Spacey and others accused of sexual assault or harassment right now.

So, a question for my friends on the right, particularly social conservatives: Isn?t the point of our politics to be better than the left? Or are we now okay with being just like them?

Are we okay with being something worse?