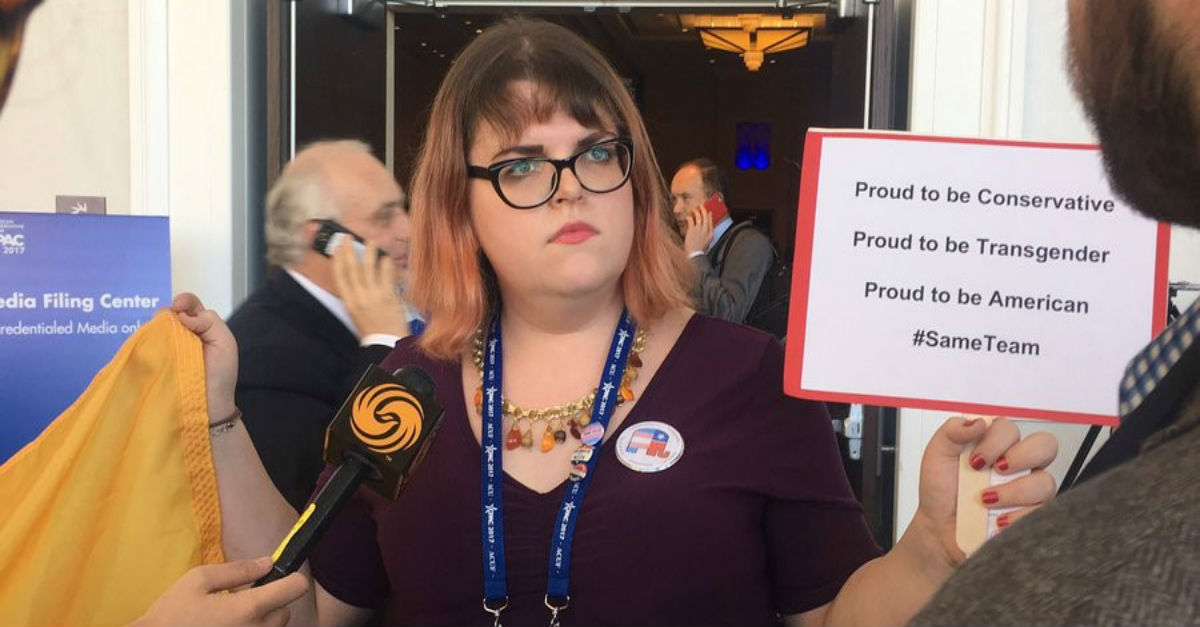 “I want to thank the evangelical community.”

President Trump was speaking to those attending the Conservative Political Action Conference (CPAC), one of the largest gatherings of Republican voters and activists in the country. He was thanking the voting bloc that had helped him get to the White House.

The crowd erupted in cheers, proud of their president and his devotion to his campaign promises. The president finished his speech and exited the stage to the popular tune of “You Can’t Always Get What You Want.”

Many in the crowd also exited, basking in their renewed sense of pride, and continued on to the other parts of the conference. But if one of these attendees were to decide to make a left towards the radio row, they would have been met with a different spirit.

Jennifer Williams and Jordan Evans stood adamantly with a Gadsden flag and signs that said “Proud to be Conservative. Proud to be Transgender. Proud to be American. #SameTeam.” They were surrounded by curious conference-goers and media members. After Trump’s shoutout to the evangelical community and a full day of headlines announcing the rollback of certain protections for transgender students, namely their right to use the bathroom that matches with their gender identity, Williams and Evans were clearly the black sheep of the conference.

“I’m very disappointed in the administration,” said Williams, who supported Ohio Governor John Kasich during the 2016 primary. The New Jersey resident has said that Trump was painted as a protector of the LGBT community. Yet, it was the transgender community, the children in the transgender community, that were the first to be “served up” at the appeal of the Christian conservatives of the party.

For Williams, the final hope lies with the Supreme Court’s decision in Gavin Grimm’s case against the Gloucester Country School Board, a landmark case that will set the legal precedence for sex discrimination and Title IX amendments in the country. Oral arguments will begin on March 28.

But the political and legal discourse has already started before the oral arguments.

Williams said that she would remain a Republican to promote open dialogue and conversation and LGBT issues. Her sentiment was mirrored by Evans, a libertarian-leaning conservative who is also the first Republican public official who is an openly trans woman.

Evans said she felt the stigma among the attendees, but she was no stranger to the looks. As a libertarian-leaning Republican, Evans was one of the excited young fans of Kentucky Senator Rand Paul, who had won the CPAC straw poll in 2015 for the third year in a row. Supporters of the libertarian-Republican senator were ecstatic at the results, waving red “I Stand with Rand” signs and shouting “President Paul” as they emotionally prepared for his presidential bid, announced nearly two months after.

Now Evans was getting looks for another reason. But her resolve was nevertheless strengthened.

“I’m still going to be doing the same stuff,” she promised. She and Williams wanted to remain actively engaged in their political community to build a bridge between the LGBT community and its critics. And for Evans, it wasn’t just about her identity. She still advocated for free markets, fiscal responsibility, smaller government, criminal justice reform, and the Constitution. She had hoped to see her Republican counterparts do the same, explaining why the Fourteenth Amendment was applicable to Title IX protections as an example.

The ladies maintained that the Republican Party was a big tent. But the party wasn’t the only thing that needed to be more accepting.

Jenner made headlines during her transition. She also made headlines when she “came out” again, this time as a Republican. While still a presidential candidate, Trump said that Jenner was welcome to use the bathroom of her choice at Trump Tower. Jenner herself has expressed a desire to be an LGBT ambassador to the Republican Party. She had also recently spoken out against the administration’s rollback of the Title IX protections.

Williams criticized the backlash Jenner had received from left-wing LGBT members. Williams said that the criticisms were shameful. Williams argued that the Republican Party needed to be as engaged as equally as the Democrat Party in order for the LGBT community to progress.

Evans praised Jenner for using her voice, but said, “When you meet one trans person, you meet one trans person,” quoting trans author Jenny Boylan. For Evans, Jenner was still a bit of an out-of-touch rich reality television star who painted an unrealistic picture of many trans Americans. Because of this, Evans restated her support for the building of more bridges in the community.

With this, the ladies spent their time speaking with anyone who engaged them. Their job was not yet complete.