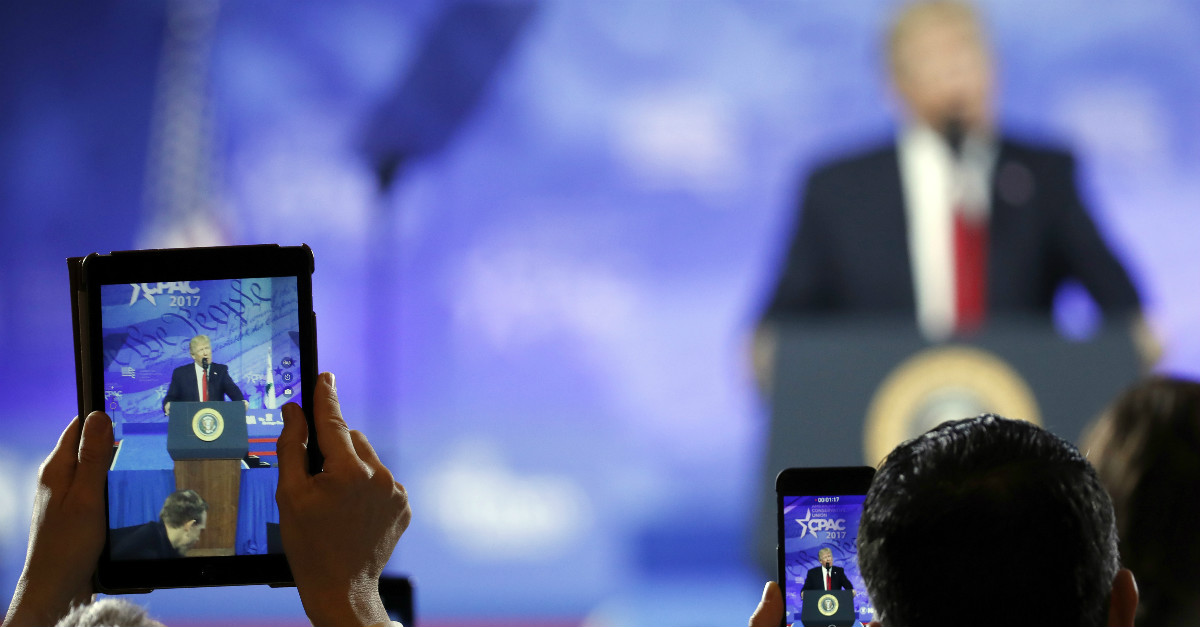 “The Conservative Movement is Donald Trump,” blared the headline at Politico Sunday in a story detailing how the new Republican president had seemingly transformed conservatism in the United States. Rare’s Matt Purple observed on Friday, “Today, at the Conservative Political Action Conference, Donald Trump completed his co-option of the American right. The conservative activist base is his now and it may never be quite the same again.”

This is true. The GOP now belongs to Trump, as does the bulk of the conservative movement, something that was on full display over the weekend.

This should surprise no one.

RELATED: At CPAC, Donald Trump completes his co-option of the conservative movement

The person who sits atop a party defines it. The Democrats became Barack Obama’s party for eight years, and Republicans certainly became the party of George W. Bush prior to that. Bill Clinton accomplished this too, so did Dubya’s dad and perhaps most vividly, Ronald Reagan.

Trickle down politics is not new.

When I supported Ron Paul for president in 2008 and 2012, and his son Senator Rand Paul in 2016, some wondered how these outlying libertarian Republicans seemingly out-of-step with their party on so many issues—foreign policy, civil liberties, constitutional fidelity, fiscal restraint—could possibly lead the GOP.

Just ask Donald Trump, who didn’t even appear at CPAC last year and was opposed by many attendees.

Too many ideologues mistakenly believe most people behave ideologically. But most political activists aren’t even that ideological, as CPAC 2017 reminded us. If you were an attendee who last year supported free trade, thought Russia threatened the U.S. and perhaps still defended the Iraq War, this year you were cheering loudly for a guy who rejects all three. A President Rand Paul would have gotten a reaction similar to Trump’s, as would have a President Marco Rubio, Jeb Bush, Ted Cruz and a dozen others who ran.

This is not rocket science. People like winning more than just about anything else. As Matt Purple noted, Trump’s warm CPAC reception “shows just how obediently principles trail behind vindicated politics.”

But principles still matter, however quickly they might change. How movements and parties are defined in policy terms matter greatly because those laws will impact the country.

This is where the always-malleable conservative movement is perhaps in better shape right now than it was the last time Republicans were in charge.

So much of Trump’s nationalist brand is anathema to libertarian-leaning conservatives who have been some of the loudest voices at CPAC in recent years. Most stayed home this year.

But libertarians, or social conservatives, national security conservatives—as much as these factions on the right might clash with each other—none are being completely shut out of the movement or Republican Party under Trump.

Many observers at CPAC saw an ideologically incoherent mess, comparing it to conferences past and what Trump has wrought. But the conservative movement is actually more intellectually diverse right now than the last time Republicans were in control.

George W. Bush was not an ideologue, but post 9/11 the conservative movement adopted some of the strictest ideological lines in the party’s modern history. To identify as a conservative throughout most of the 2000s meant unequivocally supporting the Iraq War, defending the Patriot Act and excusing torture. Traditional conservative concerns about smaller government or upholding the Constitution were discarded as a War on Terror narrative consumed the right.

Neoconservative ideologues, who prior had been just a faction, were given free rein to rigidly define conservatism as being uniformly hawkish and anti-civil liberties. Other different types of conservatives largely adopted this view in addition to whatever other conservative positions they had.

And for most of that era, few questioned it. CPAC was BushPAC (a primary reason libertarian Ron Paul ran for president in 2008 was to challenge this consensus.)

Some of the more-well known neoconservatives took the opportunity to redefine Bush’s vast expansion of the federal government as “big government conservatism,” and one Bush senior adviser even tried to permanently ban any right-winger who dared opposed the Iraq War from the conservative movement, declaring them “unpatriotic” in a now infamous National Review essay.

As problematic as Trump is on many levels, the conservative movement is not in this space anymore. It could become an ideologically lockstep party again at next year’s CPAC and beyond as the new normal cements, but for the moment, our non-ideological Republican president presides over a movement where libertarians, social and national security conservatives co-exist and debate. Each faction currently also has some leverage within the new administration.

TrumpPAC this year was an ideological mess, but was still preferable to any of the BushPACs.