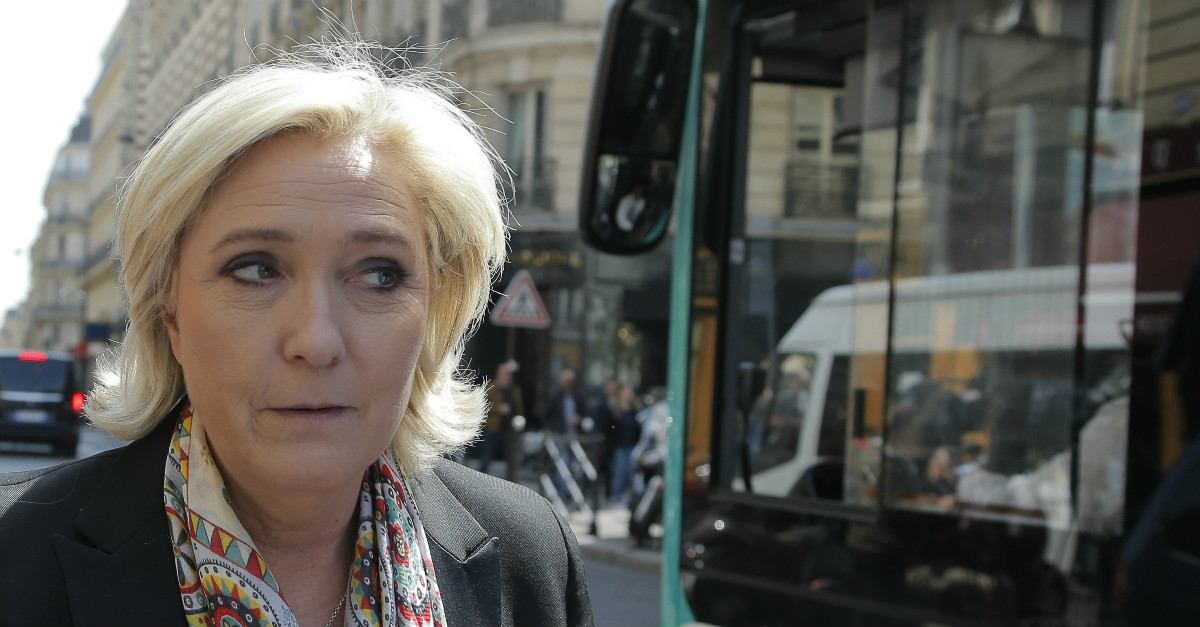 Anyone who believes the government should nationalize the banks?only temporarily, she assures us?is thieving from the political left, as is anyone who believes the state should reach all the way down to the beach and ban burqini swimwear because it’s preferred by Muslims. Le Pen is no conservative even in its post-Gaullist French sense; she’s a reactionary, hearkening back to an illusory glittering past that never existed, leveraging one economic class against another, flecked with dirigisme and government-policed secularism.

None of that is to say she doesn’t raise valid concerns. In yesterday’s first round of the French presidential election, she placed second behind only centrist tenderfoot Emmanuel Macron, after giving voice to French anxieties over a spate of recent terrorist attack and decades of unhindered mass immigration. Glance at the electoral map and you notice the now-predictable trend: France’s rust-belt northeast a Le Pen fortress, combined with rural districts where her cultural grievances found resonance. She’ll face off against Macron in a runoff election on May 7, and while she’s likely to lose, the wrath of the deplorables she represents isn’t going to be doused anytime soon.

If there was a real conservative in yesterday’s race, it was François Fillon, the former prime minister and nominee of the center-right Republicans party. Fillon is a devotee of Margaret Thatcher, risky to admit in French politics, yet he stands by her precisely because her ideology is so different from what France is accustomed to.

“She is the symbol of an inflexible political determination to stop a situation of decline,” Fillon says of Thatcher, and likewise does he support a “total rupture” for France’s economy, away from the encumbering state management of the past. He wants to fire half a million civil servants and slash the federal budget by ?100 billion. The 35-hour workweek is to be scuppered (“Why should everyone work 35 hours?” he wondered at France’s presidential debate. “There are many companies where I went?where people want to work more?) and the retirement age is to be raised to 65 from its current 62. He wants to cut the wealth tax, the business tax, and taxes on households. He subscribes to the gallingly audacious idea that better relations with Russia is to be desired and he’s more skeptical of the European Union than most on the French center-right.

Fillon, regrettably, has also allowed himself to be molded by the Le Pen phenomenon, echoing the intolerable call for a burqini ban. Still, for a glorious, fleeting moment, he managed to be something that hasn’t been seen anywhere in a long time: a Ted Cruz-style conservative insurgent who was also a genteel elder statesman, a beacon for the Catholic right who also wanted to tame France’s beastly welfare state?and he was a shoo-in to be president. With France’s Socialist party in cataclysmic disrepute, polls showed Fillon skating to the runoff against Le Pen and then trashing her effortlessly as the left and center united behind him to stop her.

Alas, it wasn’t to be. Fillon was discovered to have inappropriately paid his wife and two of his children parliamentary money in exchange for little work, a scandal mushroomed, his poll numbers nosedived, and France as new frontier of conservative governance was not to be. Today, it’s Macron who’s the most visible foe of intrusive government, with plans to cut spending and government jobs, albeit not as much as Fillon wanted, while Le Pen stagnates in the protectionist sewers.

Yet while Fillon and Macron might have adopted ostensibly conservative policy positions, neither one can really be called a dispositional conservative. No one in France wants gradual Burkean change. Following a year of riots and terrorist attacks, the French appetite is bottomlessly radical and the candidates responded accordingly, including Fillon with his swallow-your-medicine program of economic liberalism. Conservatism, challenging an ever-more liberal ruling establishment, is increasingly happy to play the role of insurgent, contra many of its philosophical roots. It’s a shame Fillon’s rebellion won’t get the chance it deserves.