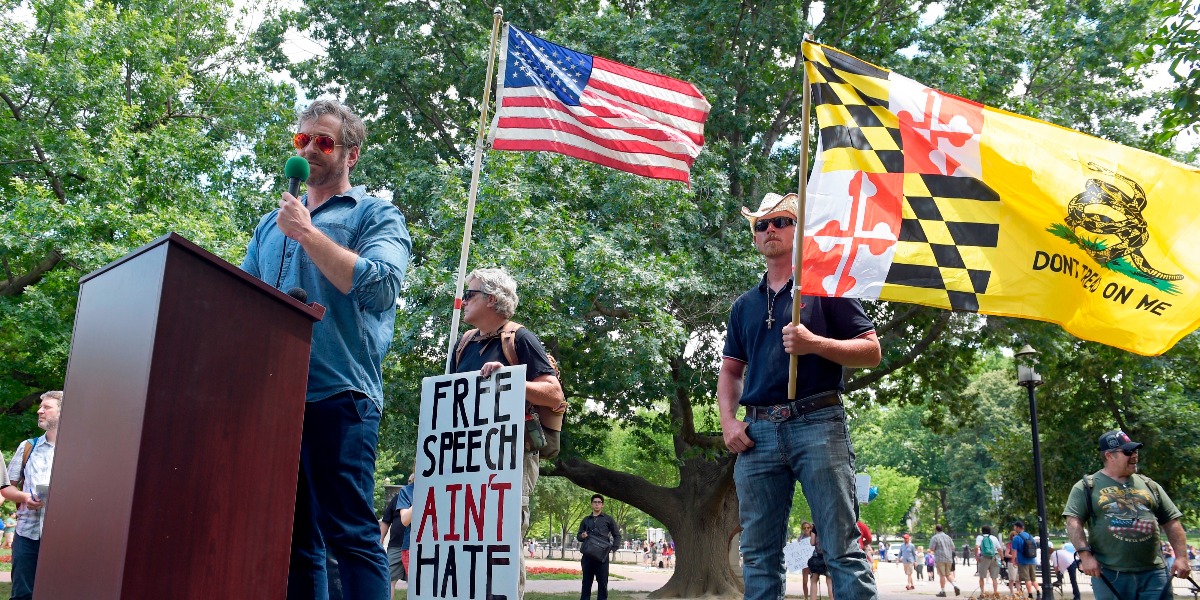 AP Photo/Susan Walsh
Mike Cernovich, left, a right-wing author and attorney who has promoted a conspiracy theory about Democrats running a child-sex slavery ring from a Washington pizza restaurant's basement, speaks during a rally outside the White House in Washington, Sunday, June 25, 2017. Cernovich was one of many speakers at the "Rally Against Political Violence," that was to condemn the attack on Republican congressmen during their June 14 baseball practice in Virginia and the "depictions of gruesome displays of brutality against sitting U.S. national leaders." (AP Photo/Susan Walsh)

On January 11, four Californians filed suit against UC-Berkeley, the city of Berkeley, and the school’s police department for failing to keep the peace during last year’s riots.

During the riots, a Berkeley College Republican was punched and a protester pepper sprayed a woman wearing a MAGA hat while she was giving an interview. Black-clad protesters threw fireworks and Molotov cocktails. Due to safety concerns, the university did not permit Yiannopoulos to speak. University administrators said the riot cost around $100,000 in damages. Since then, security fees for alt-right speakers have skyrocketed as campuses fear riots.

The knee jerk, violent reaction to controversial speakers like Yiannopoulos or alt-right conspiracy theorist Mike Cernovich should be condemned for their illiberal rejection of free speech, but perhaps we should also question why these supposedly conservative and libertarian student groups are inviting such characters in the first place. What do people like Yiannopoulos or Cernovich have to offer to political debates on limited government?

Perhaps these conservative and libertarian students feel stifled by an environment hostile to their political viewpoints and are looking for someone to stir the pot. Inviting an alt-right provocateur is a middle finger to an overwhelmingly liberal campus community.

Students are often justified in thinking their political beliefs are not welcome. The Foundation for Individual Rights in Education, an organization dedicated to defending rights at universities, has a disinvitation database that tracks attempts to disinvite speakers from college campuses since 2000. Out of the 360 instances documented on the database, 233 show the attempt to disinvite came from left-leaning individuals (84 were successful).

A 2016 study by Econ Journal Watch found that liberal professors outnumber conservatives 12-to-one. Samuel J. Abrams, a Sarah Lawrence professor and researcher at the Hoover Institution, found that universities had a six-to-one ratio of liberal to conservative professors.

These studies don’t prove liberal bias, but they add weight to the idea that conservative ideas are less likely to be represented on campus––and often greeted with hostility.

Speakers like Yiannopoulos have elicited the kind of response these student groups are looking for: making those who protest the events look like intolerant “snowflakes” unable to handle opposing viewpoints without resulting to violence.

This battle plan is a double-edged sword and student organizations that identify as conservative should be wary of employing this tactic. Student groups aren’t responsible for whatever comes out of Yiannopoulos’s mouth, but inviting him under the College Republicans banner forms a clear association.

Do they really want to be tied to Yiannopoulos, who has argued that “In the gay world, some of the most important enriching, and incredibly life-affirming, important, shaping relationships are between younger boys and older men?” Or Cernovich, who has pushed the Pizzagate conspiracy, alleging a pedophilic sex cult was operating out of a D.C. pizzeria?

What is the worth of being associated with conspiracy theorists or pedophilia apologists?

If right-leaning student groups are looking for someone to discuss the issues surrounding free speech there are better alternatives. Why not invite Greg Lukianoff, the president of the Foundation for Individual Rights in Education (FIRE), which advocates for students’ First Amendment rights? Or Jonathan Haidt, a social psychologist who co-authored “The Coddling of the American Mind” with Lukianoff in The Atlantic.

These people aren’t as flashy as Yiannopoulos or as brash as Cernovich, but they have something more substantive to offer: actual knowledge and the ability to debate.

Unfortunately, some students will continue to gift alt-right trolls a platform to spew shallow take downs of social justice advocates. Changing these students’ minds will not be an easy task, especially since a few of them are not actually interested in the tenets of classical liberalism but are instead looking to gain status as edgy contrarians.

Student protesters still might attempt to shut down less controversial speakers. Claire Guthrie Gastañaga, executive director of the American Civil Liberties Union in Virginia, was prevented from speaking on the First Amendment at the College of William & Mary by Black Lives Matter protesters.

The Unsafe Space tour, sponsored by British magazine Spiked, and featuring journalists like Reason’s Elizabeth Nolan Brown, was supposed to take place at American University before it was canceled. The AU chapter of American Association of University Women celebrated the university’s decision, arguing the talk was full of hate speech against marginalized people.

While progressive student protesters may protest anything to the right of them, it is still unwise to invite provocateurs to represent conservatism or libertarianism. When students protests respected individuals like Gastañaga or Brown, they come across as intolerant and hostile to free speech. It is past time for students to reject professional trolls who have no purpose except to rile up the easily-offended.

Lindsay Marchello is a Young Voices Advocate and an Associate Editor with the Carolina Journal. Follow her on Twitter @LynnMarch007