In a move anticipated by some libertarian-leaning Republicans, former Libertarian Party presidential candidate Austin Petersen announced his intentions to run for U.S. Senate as a member of the GOP in the state of Missouri on Tuesday.

Petersen was born and raised in Missouri, and is the CEO and owner of Stonegait LLC, a photo and video consulting firm. He is also the founder of The Libertarian Republic and Liberty Viral, both popular news and commentary sites among libertarians.

In an op-ed for The Kansas City Star, Petersen explained his decision to run as a Republican. Petersen says that Washington has returned to “business as usual” after Donald Trump’s “unexpected” win in November.

“After running on repeated promises of minimizing government and ending federal micromanagement of American lives, Republicans have shown themselves unable to pass any substantive reforms,” Petersen said.

“Missourians deserve better than this,” Petersen added, saying that Americans deserve representative government, not one run by lobbyists and special interests. He also stressed the need to promote individual choice in everything from finances to health care.

Petersen says that the party change represents the desires of his supporters to affiliate himself with the “party of Lincoln.”

“Although I ran for president in 2016 as a Libertarian, I intend to make this run for the Senate as a Republican,” Petersen wrote. “I have made this change in large part because after personally reaching out to over 4,000 of my supporters, more than 98 percent of them said that the party of Lincoln was the best fit for my pro-life, pro-liberty, pro-Constitution stands — and more importantly, the best way to bring change to Washington.”

Petersen also highlights his experience “inside and outside” of the political sphere.

“I created and currently run my own business — an online magazine dedicated to promoting the ideas of liberty — and I know too well just how hard the government makes it for ordinary citizens to do this. Inside the political arena, I’ve worked as a producer with one of the nation’s foremost experts on the Constitution, Judge Andrew Napolitano,” Petersen said. “I’ve helped manage grassroots campaigns and campaigns for public office. And in 2016, I ran for the highest office in our nation, fearlessly challenging establishment opponents for the Libertarian Party’s nomination.”

In a farewell letter to the Libertarian Party, Petersen focused on his service to the party as a whole.

“I have served the Libertarian Party in nearly every capacity, at every level, from your humble volunteer coordinator at your national office, to one of your top contenders for President of the United States,” his letter reads. “Any future successes I may garner in the realm of politics will come in large part because of the experience and opportunities you gave me to advance American freedom, and for that I thank you.”

Petersen is well-known for his critiques of all sides of the political spectrum, including his refusal to endorse Libertarian Party Vice Presidential candidate Bill Weld in 2016, whose some in that party thought did not represent its platform adequately.

Reason’s Nick Gillespie notes that Petersen’s Republican platform is identical to his Libertarian one. “He is staunchly anti-war and is calling for an audit of the Pentagon; favors school choice, drug legalization, and gay marriage; wants to simplify and reduce taxes while cutting overall spending; pushes criminal justice reform, an end to regulations large and small,” Gillespie writes. “He remains opposed to abortion, which is a minority position among libertarians, but calls for strong religious liberty and a total repeal of Obamacare/Trumpcare.”

In the past, Petersen has attracted the attention of many prominent conservatives, such as Dana Loesch, Glenn Beck, Mary Matalin, and Erick Erickson. 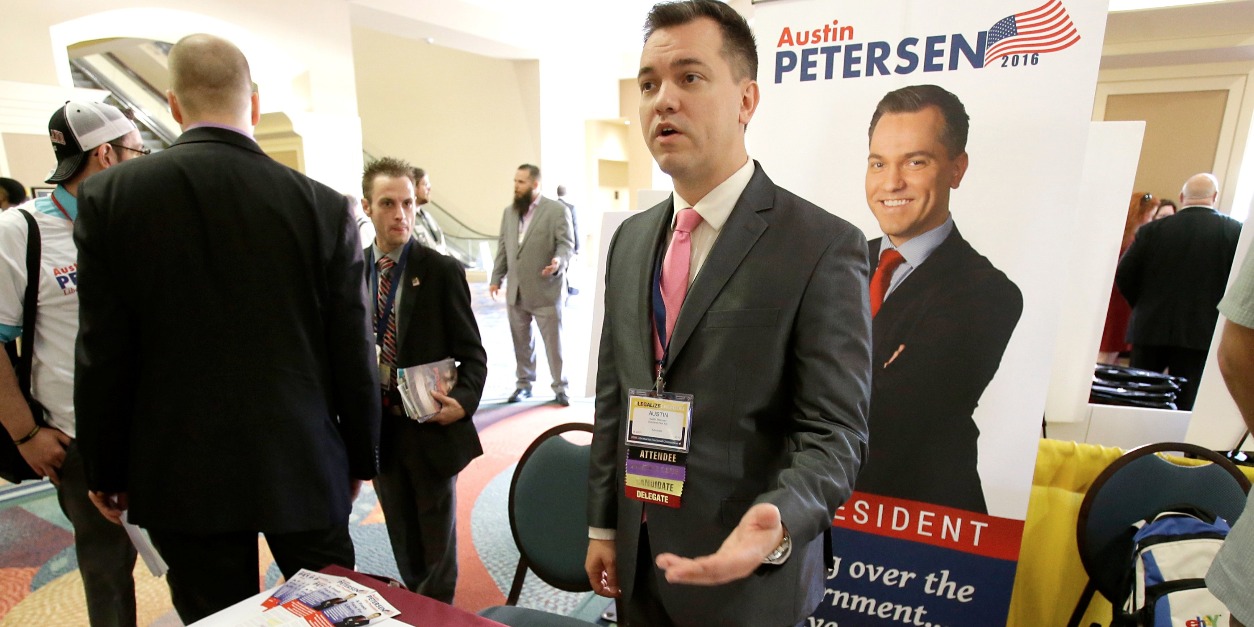