Gallup poll results released on Monday found that 49 percent—just about half—of Americans agree that our government is “an immediate threat to the rights and freedoms of ordinary citizens,” while an equal percentage disagree.

While this concern was a decidedly minority view prior to 2006, since then mistrust of the government has measured in the mid-40s or higher: 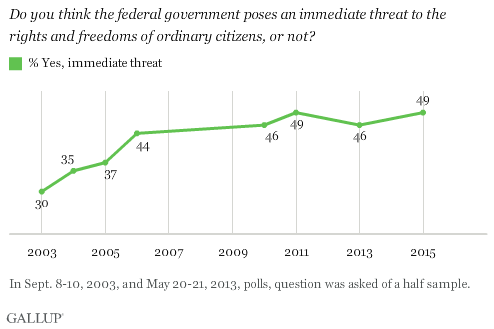 And the reasons for this distrust are on point. Overcriminalization, outsized government, and violations of civil liberties, Second Amendment rights, and personal privacy top the list: 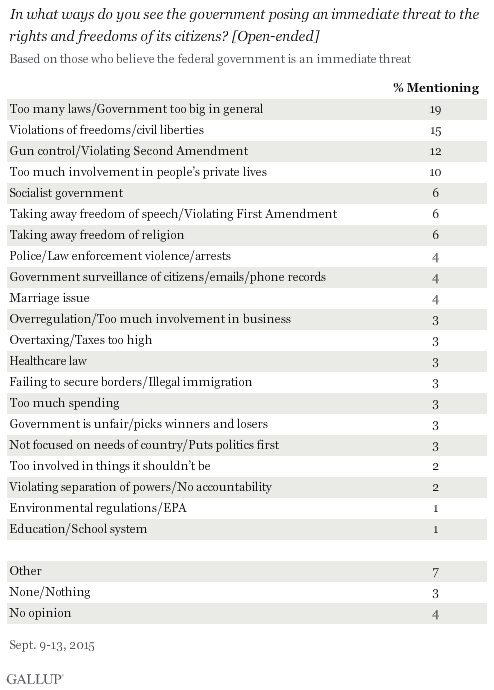 Sadly, Americans’ perspective on the threat the government does or does not pose to our rights and liberties is heavily influenced by partisanship—and specifically, by whether or not their party controls the White House. During President Bush’s tenure, Democrats were far more suspicious of the government than were Republicans. Once President Obama took office, those numbers promptly switched: 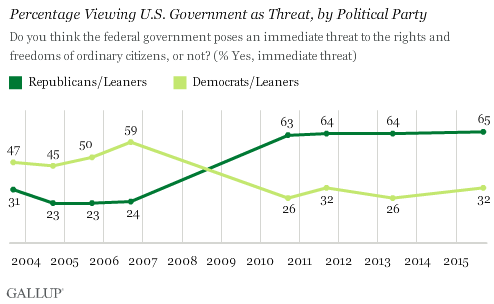 This is unfortunate, because as I’ve argued before here at Rare, Republicans and Democrats are basically the same on all these issues (with the possible exception of support for the Second Amendment on the right). Both engage in out-of-control spending, both ignore our most basic rights, both have no respect for the rule of law.

Americans’ suspicion of the government is a good instinct. In fact, I’d suggest that even if you want far, far more government than I do, you should still want a large subset of the population to take everything the government says with a mountain of salt. Skepticism about government is absolutely vital for keeping government honest. I’m happy to see this spirit on the rise among my generation; it’s been sorely lacking for years.

So it’s a good thing that more and more Americans see the government as a threat to liberty. It is a threat. Maybe next that mistrust can become a bipartisan issue.