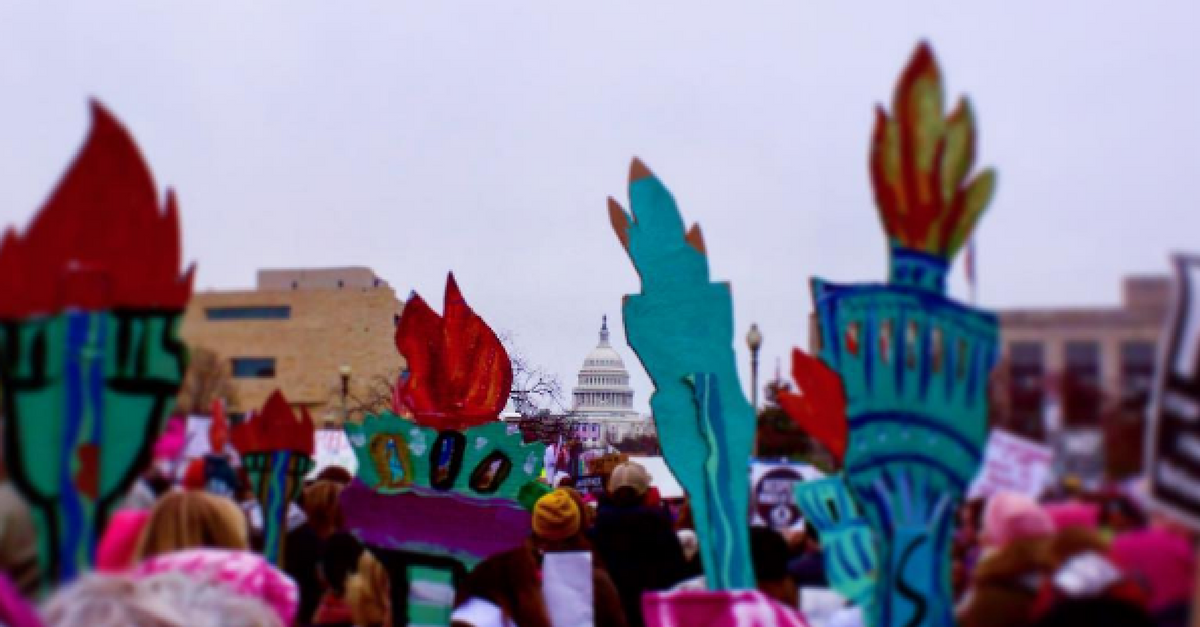 I attended the Women’s March on Washington last weekend as a reporter, but if I could have gone as a participant, I would have.

I am not a Democrat, and I did not vote for Hillary Clinton (I didn’t vote for Trump either). But I do consider myself a feminist, and I don’t think being a progressive is the only way to be a feminist. The demonstrations that took place across the world on Saturday were beautiful displays of democracy and liberty in action, and so it saddens me to see the marches being attacked so aggressively from the right.

RELATED: After this weekend’s world-wide Women’s Marches, Bristol Palin had “3 serious questions for the feminist movement”

Whether marchers recognized it or not, the Women’s March and its sister marches did more than make a statement against the new administration. The marchers criticized government itself and the institutionalized oppression of not just women, but of all marginalized people.

What I saw on display was the left’s newfound concern with government corruption and an awakened fear of an excessively powerful executive branch. This is something that conservatives could capitalize on. While many conservatives and libertarians did realize this, taking part in the marches to promote women’s liberation, most did not. Instead of standing with the 4 million people who marched world-wide to protest our federal government’s taking any future action to infringe upon the rights of women, too many conservatives were quick to write off the Women’s March as waste of time.

In the days following the marches, right-wingers criticized marchers for using their First Amendment rights to stand up for the all of their rights, calling them selfish and whiny and asking questions like: ‘Why are American women complaining about being unequal when women in other countries have it so much worse? I’m a woman and I don’t feel oppressed, so why are they playing the victim? Donald Trump has just said terrible things about women; he hasn’t actually done anything, so why are they protesting words?’

I think it’s important to note that the Women’s March wasn’t necessarily a demand by women for more rights as much as it was a celebration of the rights we already have and a display of our intention to protect them. We are thankful for the rights we have secured in this country and for the women who came before us to fight for them. Honoring and remembering those women was one of the main purposes behind the marches, but so was showing the Trump administration that we won’t allow those achievements to be undone — something this White House has not effectively convinced us won’t happen.

Donald Trump’s rhetoric about women shows his blatant disregard for us. He is the leader of our country, someone who is supposed to be the ethical and moral compass of our nation and whom thousands of people — most importantly our boys and men — look up to as a role model. The fact that these are words and not actions is not only arguably untrue (considering several women have accused him of sexual assault/harassment and that he actually joked about doing so), but it’s also irrelevant when you’re the president of the United States of America, because those words suggest to men that it’s okay to treat women this way. Hundreds of thousands of people marched not because their feelings were hurt by the words of this man, but because they fear he has given men across the country an excuse to treat women as lesser human beings. More importantly, they are worried that the very small regard Trump has for women could be reflected in policy during his presidency.

I’m sure many conservatives took issue with the Women’s March after the event organizers removed a pro-life group from their list of partners, which I think is a valid reason to be offended. However, I can’t help but wonder if most of them simply saw a “liberal protest” and immediately dismissed it as nonsense without learning more about it.

RELATED: Video of a Trump supporter cleaning up after the Women’s March is sweeping the nation

Yes, the marchers were probably overwhelmingly liberal. But what I saw from many of them was a reignited desire for freedom. I saw people waving the American flag. I saw Gadsden flags being worn as capes and signs reading “Don’t tread on me.” I saw people dressed as the statue of liberty, thrusting liberty torches into the air. I saw signs that said, “I’m with her” underneath not a picture of Hillary Clinton, but a picture of Lady Liberty. Whether intentional or not, the Women’s March definitely had a pro-liberty element to it. If more conservatives had taken the time to realize this, they could have pushed forward a limited government message in the media following the marches — or even better, by having a strong conservative presence at the marches themselves. Based on what I witnessed, I think those who marched would have been receptive or at least open to hearing about how keeping government out of the private lives of women could be a good thing.

The left is showing signs that they might be ready to be liberated, but instead of taking the opportunity to lead that conversation by advocating for alternative, free-market solutions to women’s issues, the right closed its eyes and ears to a liberal plea for smaller government.