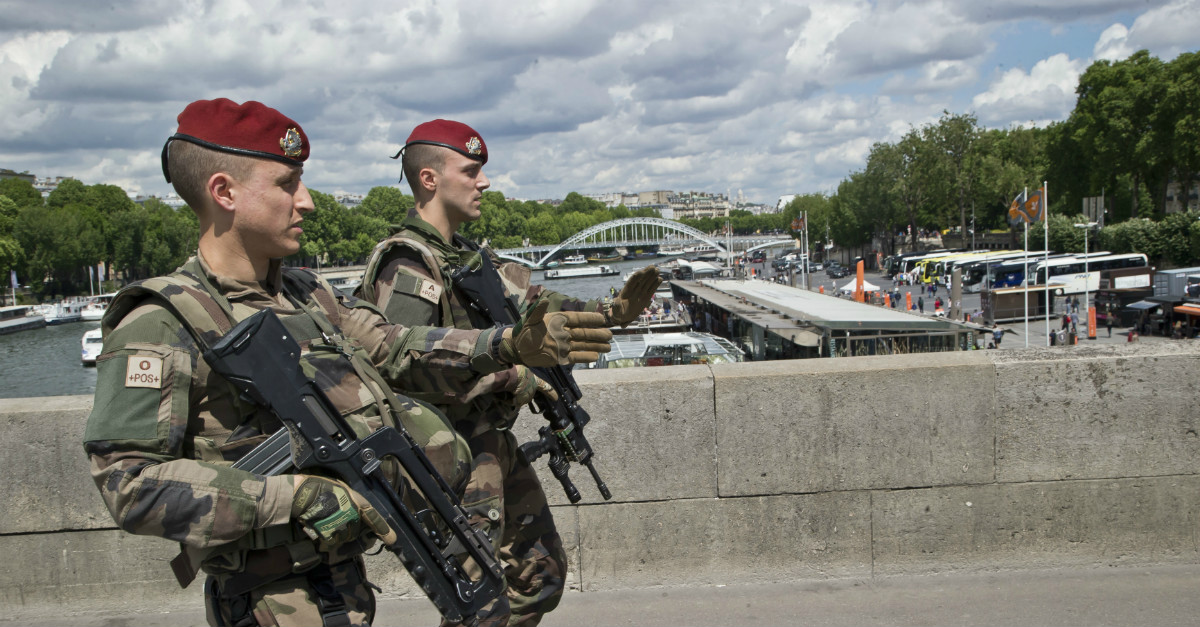 AP Photo/Michel Euler, Pool
French soldiers walk over the Mirabeau bridge during a visit of France's Defense Minister Sylvie Goulard to the troops on duty at the Eiffel tower in Paris, France, Saturday, May 20, 2017. France's defense minister has visited troops on duty one day after France's President Emmanuel Macron visited the troops of Operation Barkhane in northern Mali. (AP Photo/Michel Euler, Pool)

When former French president François Hollande declared a state of emergency in November 2015, after the horrific terrorist attacks in Paris, the government was clear on its intentions. Former prime minister Manuel Valls recommended the country remain in the state of emergency until ISIS was defeated.

By that standard, it’s going to be a long time before civil liberties are restored in the République.

The French state of emergency law dates back to 1955. During the Algerian War, France had been subject to attacks by the National Liberation Front, which was fighting for the independence of Algeria from the colonial French. The state of siege, which transferred all the powers of the state to the police and the military, had existed since the middle of the 19th century, but was applicable only if France was being invaded, not if it was subject to attacks by non-state actors.

The new state of emergency, implemented in 1955, prevented the police and military from taking over completely by vesting power to restore the “public order” with the executive. According to the law, authorities during a state of emergency are allowed to extend detentions, conduct searches (including home searches) without a warrant, wiretap, ban all types of public and private events, and prohibit gatherings of more than three people.

All of those allowances have been used during the current state of emergency. In its first six months, the police conducted over 3,500 searches that would have been illegal under the normal regime. In fact, as the French newspaper Libération reports, only one of the thousands of home searches conducted in the aftermath of the November 2015 attacks was classified as necessary to prevent terrorism.

Amnesty International has warned about the consequences of this absence of civil rights. Over 600 individuals were under house arrest at the end of 2016, with little to no proof that they had any link to terrorism whatsoever. Today, 60 still are. Amnesty also estimates that only 0.3 percent of conducted searches are in any way furthering the investigation into terrorism.

Numerous protests, against reform laws and during the COP21 Paris Climate Conference, have been banned from taking place, with the government making no effort to justify these decisions as related to terrorism. This absence of legal justification has even worried the United Nations, which recommended that France use “prior judicial inquiries” in order to “guarantee fundamental rights and prevent arbitrary procedures.”

After the attacks in Manchester, British Prime Minister Theresa May announced a proper response to the threat of terrorism in her country. Her Majesty’s government increased the terrorist threat level in the immediate aftermath of the suicide bombing, raising it to “Critical.” That level, established by Britain’s security service MI5, increases the presence of law enforcement and surveillance in public areas yet does not otherwise suspend civil liberties during the investigations. Four days after the attack in Manchester, the threat level was decreased back to “Severe.”

The UK has been careful with its use of the state of emergency. Not even the infamous 7/7 London bombing triggered a France-style response.

Emmanuel Macron, the recently elected French president, is striving for new surveillance laws in France, which will render the state of emergency obsolete?but not in a good way. Macron wants to institute the repressive crackdown on civil liberties legislatively, which would make the state of emergency permanent, all in the name of security.

The French general public shouldn’t be so ambivalent when it comes to the power of government. The same people who care very little about the measures that the French executive is now instituting would be horrified if the same powers ended up in the hands of a politician such as Marine Le Pen.

The state of emergency here in France is dangerous for the freedom we all collectively enjoy and for which we often (rightfully so) assert the superiority of liberal democracy over authoritarianism. This monster of our own creation needs to be stopped before it becomes the most unsettling threat of all.