Late in March, a police car in Grand Rapids, Michigan, pulled up on a group of five black boys walking home from a basketball game. Body camera footage shows the cops exited their car with guns drawn, ordering the kids, who were between 12 and 14, to place themselves face down on the sidewalk. As the kids comply, the video captures them talking, panicked, to each other and the police.

“Please don’t shoot me,” pleads one. “I don’t want to die,” says another. One boy is in tears he’s so scared.

Mercifully, the cops didn’t shoot, and all five boys walked away unharmed. Some of the boys’ parents arrived on the scene and made it clear they were not happy with finding out their middle schoolers — middle schoolers! — were held at gunpoint.

RELATED: The charges against Philando Castile’s killer are a model of police accountability done right

Still, the local police department says the officers did “nothing wrong,” insisting that they were responding to reports of teenagers fighting and carrying a visible weapon. That they decided to approach kids who were not fighting and were simply carrying visible basketballs is apparently not troubling to the Grand Rapids PD.

It is, however, troubling to the boys’ moms. As one mom explained to the officers, “Y’all didn’t see a gun, but y’all pulled guns on my kids.” The cop she’s speaking with protests that he had to pull his weapon because he didn’t know if the boys were armed — but that’s her whole point: absent of proof one way or another, the cops defaulted to escalation and endangerment of children.

This wasn’t an active shooter situation. There was no fighting. Some of the boys don’t even look old enough to be classified as the “teenagers” the cops were seeking. If these were my children, I’d be royally peeved about how they were treated.

In this case, it all turned out okay. Well, not entirely: In a totally unsurprising development, the boys have discovered a newfound distrust of the cops. “Now they’re saying they don’t like the police. They don’t want to be involved with the police,” one mom said. “They should’ve been approached differently because they are young boys. They had basketballs in their hands.”

A month later and about 1,000 miles away, 15-year-old Jordan Edwards did not end up okay.

The high school freshman went to a party with his brother the evening of Saturday, April 29, in a suburb of Dallas, Texas. Jordan, too, was African-American.

The party got rowdy, and the cops were called. Around the time the police arrive, gunshots were heard somewhere in the vicinity, and the Edwards boys got into a car with three other teens to leave the party. As they pulled away, cops rushed in, guns drawn. One office fired on the car, and three bullets found their mark. Jordan Edwards is dead, shot in the head.

The Dallas PD initially claimed the shooting was defensive — the car was driving in reverse toward the police “in an aggressive manner” — but video of the incident proved that was not true. In fact, the opposite was true, the car was driving away. The teens weren’t armed. They didn’t threaten the cops. They posed no risk to the officers’ lives.

But Jordan Edwards is still dead.

The officer responsible has been dismissed from his position, but not arrested, even though Jordan’s death was labeled a homicide by the coroner. The facts seem damning enough — and it is awful to be able to make this assessment in light of such a broad pool of comparable police killings — that a trial may be forthcoming. Whatever the legal resolution, it is sure to be a long and gutting process for Jordan’s bereaved family.

First, that body cameras helped. They didn’t prevent these cases from happening, but they did pull them kicking and screaming into the light of day.

In Michigan, we would never have heard about what happened to those boys without video of their encounter. It would just have been the kids’ and moms’ word against that of the police. Absent footage, this militarized treatment of children almost certainly would not have come to light.

In Dallas, the police claimed the car Jordan was in was charging officers, making the shooting a defensive response. Video proved that wasn’t true. Whether you believe the original story was an honest mistake or a deliberate lie, knowing the truth makes a world of difference.

It is difficult to contemplate what happens in all the other cases, all the ones without video.

The second thing to note is that this problem has not gone away. There is much competing for our political attention right now, but police brutality and criminal justice reform, including the indisputable role of race, cannot be neglected. It is often a discouraging and draining topic — I would be happy if I could never write about another Eric Garner, another Philando Castile, another Walter Scott.

But until a lot changes, there will be another, as Jordan Edwards’ family now knows all too well. 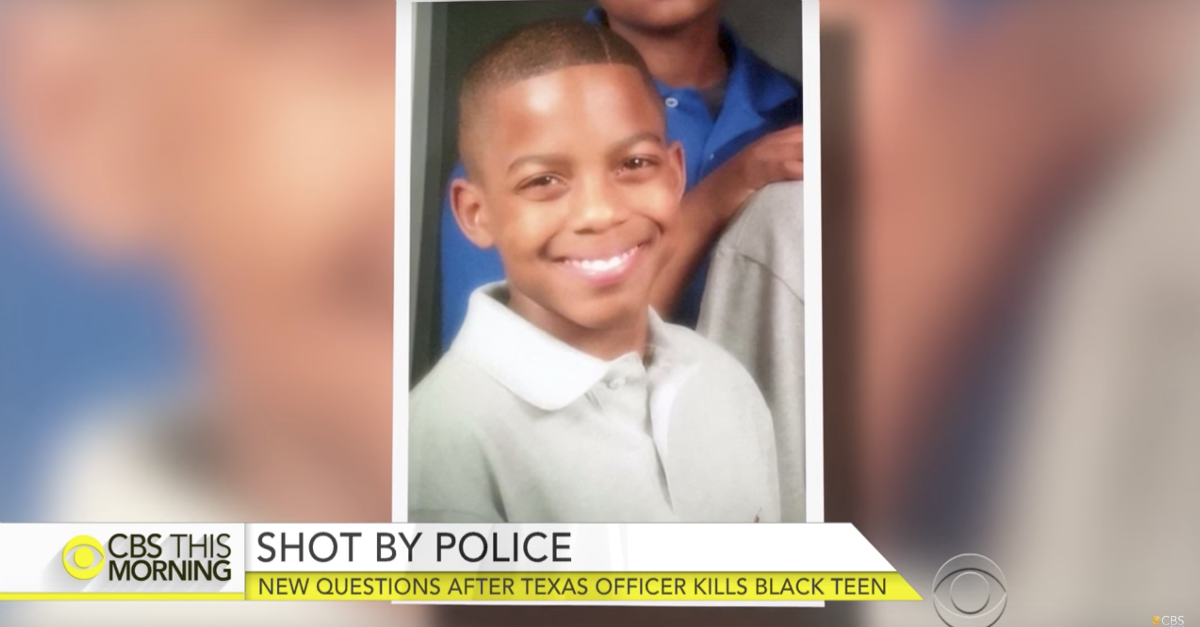