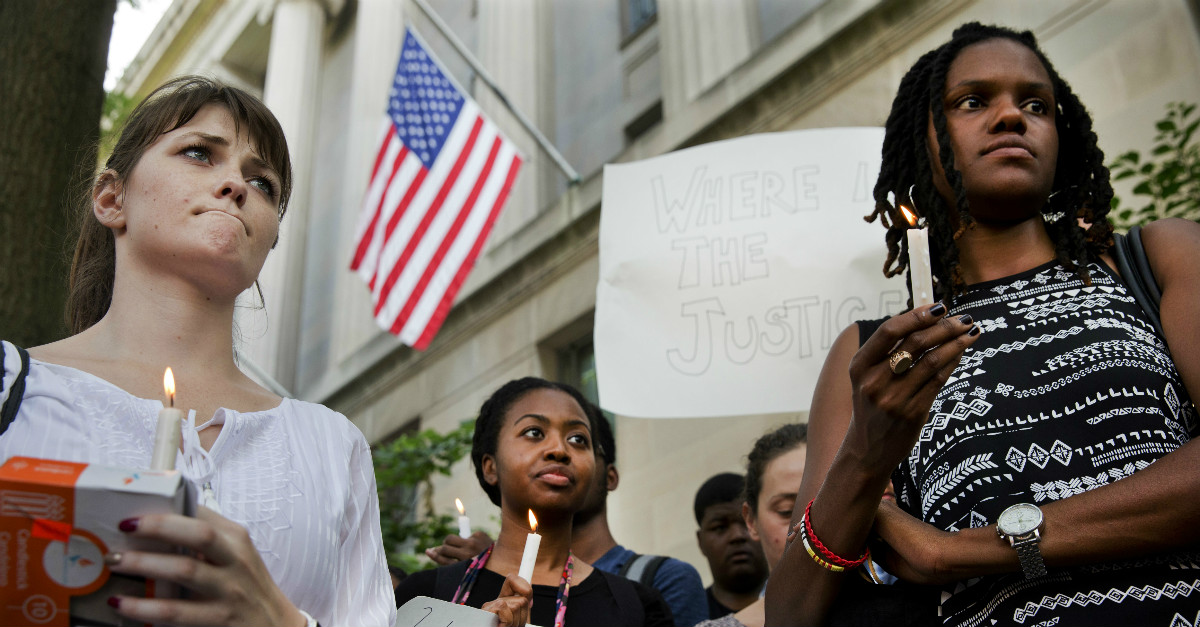 About five years ago, this cartoon made the rounds among libertarian, Tea Party, and Occupy Wall Street types:

We Are All Terrorists: pic.twitter.com/1uTfKUQp

The cartoon was funny, but its message was serious: Washington has a tendency to get a little too flexible with its use of the word “terrorist” when it happens to be convenient. At the time, people were angry about the 2012 National Defense Authorization Act (NDAA), an annual military funding bill which that year codified indefinite detention of Americans in violation of the Bill of Rights.

Unfortunately, five years later, the cartoon is relevant to a new concern. You see, the classic definition of terrorism is violence committed against civilian populations with the intent to force political change, but a document leaked to Foreign Policy this month reveals the FBI has begun using a looser term ? “black identity extremists” (in other words, black activists) ? as a subset of domestic terrorism. It risks grouping people who engage in politically-motivated violence together with peaceful protesters of police brutality against minorities so Washington can spy on both. McClatchy DC reports:

The report predicted it is ?very likely? that black identity extremists would engage in ?ideologically motivated, violent criminal activity? against police within the next year.

It identified six attacks against police as examples of black identity extremism, but [Michael German, who left the FBI in 2004 and did undercover domestic terrorism work] said the logic in the report is deeply flawed. ?If you look at three of those cases, there?s no ideology connecting them at all,? German said. ?The only commonality is that they?re black.?

?They?re taking isolated incidents and turning it into a movement to justify increased surveillance,? he continued. ?It?s throwing fuel on this argument of a war on police by black people, even though if you look at the numbers that?s not the case.?

This would not be the first time Washington has dishonestly hyped the threat of violence among black activists in America and used that as an excuse for surveillance. “There is a myth in this country that in a world where everyone is watched, everyone is watched equally,” notes Alvaro M. Bedoya, founding executive director of the Center on Privacy and Technology at Georgetown Law. But the historical reality is “people of color have been the disproportionate victims of unjust surveillance … And while racism has played its ugly part, the justification for this monitoring was the same we hear today: national security.”

RARE POV: ?Fake news? is a problem, but fixing it shouldn?t mean giving up free speech

In fact, half a century ago, the FBI labeled Martin Luther King, Jr. the “most dangerous Negro of the future of this nation.” The NSA worked “to destroy Dr. King as the leader of the civil rights movement,” targeting him with “an extensive surveillance program” like that used against suspected Soviet agents.

?This is a new umbrella designation that has no basis,? an unnamed former senior counterterrorism and intelligence official from the Department of Homeland Security told Foreign Policy after reviewing the document. ?There are civil rights and privacy issues all over this.?