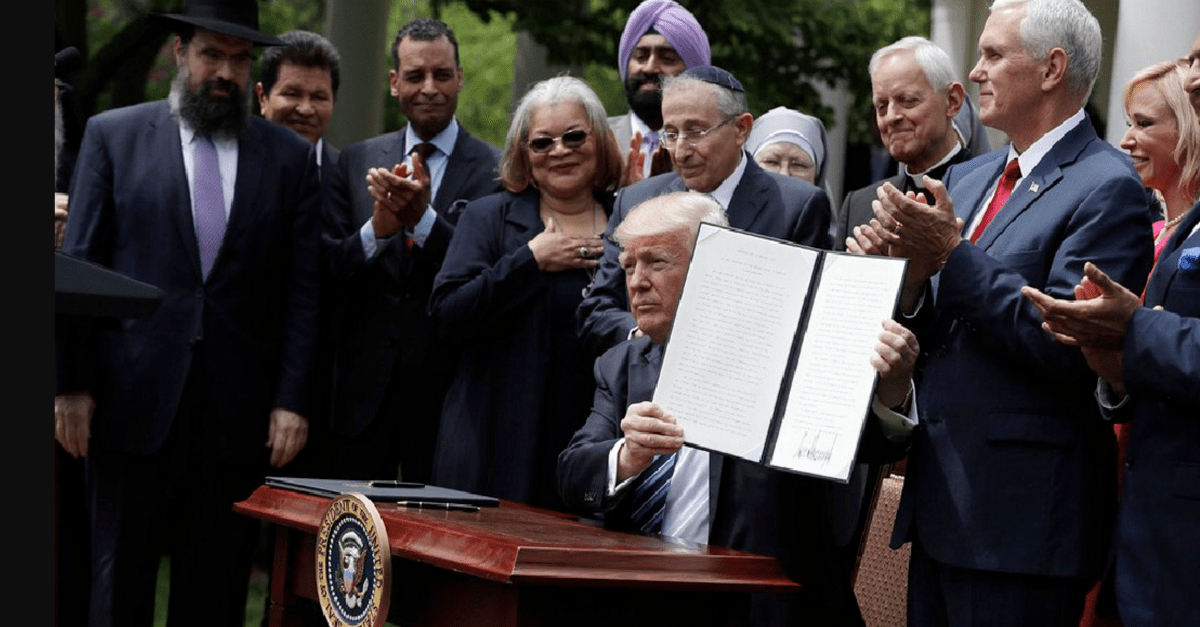 President Trump evinces little knowledge of Christianity or interest in following its precepts, but he does like Christians because he wants our money and votes. The latter bit is par for the course for American politicians, of course, but the former is fairly unique to Trump, especially among Republicans.

That context is what makes the executive order pertaining to religious liberty Trump signed this week so bizarre: Apparently it doesn’t really do much.

RELATED: Jordan Edwards’ tragic killing reminds us so much still needs to change about policing in America

I know, I know, you’d never guess that from a lot of the conversation surrounding the order, including from Trump himself. To hear the president tell it at his signing ceremony, this is a huge deal that stops federal sermon censorship and ensures religious people are no longer “targeted, bullied or silenced.”

That all sounds very dramatic, but here’s a curious thing: The American Civil Liberties Union, which expected to mount a large-scale legal challenge to the order (especially if it offered religious exemptions to health-care or LGBT nondiscrimination rules), instead responded with a lawyerly shrug.

“Today’s executive order signing was an elaborate photo-op with no discernible policy outcome,” said a statement from the ACLU’s executive director.

“After careful review of the order’s text we have determined that the order does not meaningfully alter the ability of religious institutions or individuals to intervene in the political process,” he added. “The directive to federal agencies to explore religious-based exceptions to healthcare does cue up a potential future battle, but as of now, the status quo has not changed.”

After some initial hyperventilating, other assessments from across the political spectrum pretty much agree. CNN notes the order doesn’t really change how much politicking churches can do and quotes the Southern Baptist Convention’s Russell Moore, a religious liberty advocate, as saying this EO is “more symbolic than substantive.”

Rod Dreher over at The American Conservative similarly says the EO may be good news if you’re a “preacher eager to politicize your pulpit and make yourself useful to Washington power brokers,” but that the order is nevertheless “next to nothing” and offers no substantive protections for freedoms of conscience actually under threat.

So it seems President Trump’s “religious liberty” executive order doesn’t really do anything for religious liberty. But before we move on to the next outrage of the day, I do want to take a moment to circle back to Dreher’s characterization of who is most likely to be excited about Trump’s religious liberty priorities.

Religious liberty is obviously important, and not just for Christians. There are real conversations to be had about how we can better protect freedom of conscience in America (I prefer that broader term, “freedom of conscience,” to “religious liberty,” because it includes nonreligious beliefs, too). But giving clergy more opportunities to get political is not — or, at least, should not be — the forefront of this fight.

Look, as a libertarian, I totally get the free speech case for allowing pastors to endorse or oppose candidates from the pulpit. (That’s not actually illegal now — no one is “censoring sermons” in the way Trump suggested — it’s rather that most churches have a 501(c)(3) nonprofit classification with the IRS, and those nonprofits aren’t allowed to electioneer. Any pastor who really wants to talk politics in the pulpit can just change his church’s tax status and be taxed like a business.)

RELATED: What if we treated the government like United Airlines?

But I still don’t think this should be a priority for freedom of conscience advocates for two reasons. The first is about practical politics: There are more important conscience issues to address with limited political resources.

The second is about the church: Setting aside the question of what should be legal, the last thing Christians should want to see is for Sunday mornings to turn into campaign rallies for Trump or anyone else. Pastors should not, as Dreher phrased it, be “eager to politicize [their] pulpit and make [themselves] useful to Washington power brokers.” This is a free speech opportunity it does not behoove the church to use. Jesus said, “my kingdom is not of this world,” and it’s certainly not of Washington.