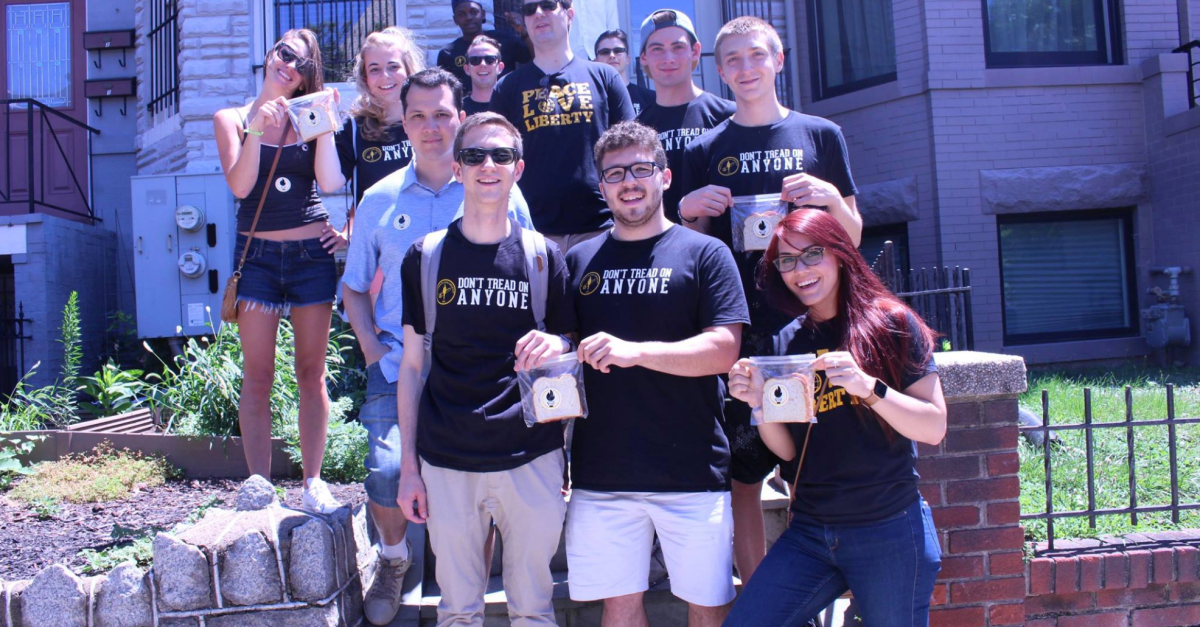 Libertarians practice what they preach. The evidence is in the numbers.

This past Sunday, young libertarian activists from across the country participated in Students For Liberty’s Day of Service, a national event focused on handing out food, water, and other goods to those in need. It was about coming together as a community and giving back. The event took place in six major U.S. cities – Columbus, Salt Lake City, Anchorage, Philadelphia, Madison, Lubbock, and Washington, D.C.

The result? Hundreds of lunches and water bottles handed out as well as toiletries, snacks, and more.

After the event was over, SFL members recalled their interactions that day. One of our members in Washington, D.C. gave a sandwich and a water to man named Raymond who was starting a job this week for the first time in a decade. He expressed his gratitude as he described to a colleague of mine that he was also about to secure a place to live. Another man, Marc, was still on the job hunt himself, after years of battling with PTSD and drug addiction following a tragic experience with the violent death of a friend. Now Marc is in a better place – sober and gearing up for job interviews.

These individuals were beyond grateful not just for the lunch but also for the conversations that took place on Sunday.

This event was bigger than one sandwich or water bottle, it was about actually making a difference. The reality is that voluntary charity does more for those in need than does forced philanthropy. ​As Frederic Bastiat illustrates in ​The Law​, “Legal plunder has two roots: One of them, as I have said before, is in human greed; the other is in false philanthropy.”

And what does Bastiat mean by false philanthropy? Well, he’s challenging the notion that some kind of “free” government service will inherently benefit those in need. The idea is that through false philanthropy, government takes away the property and money of some and gives it to others in hopes of doing the work of charities. However, the reality is that this is often an ineffective tool to combat issues such as access to food and health services, and is often corrupted by the greed of those in public office.

The root libertarian belief in a free society isn’t to simply ignore market failure but to provide charity where necessary. It’s the responsibility of individuals in their communities to work together for a better tomorrow. Proponents of a free society understand that mutual aid and charity are core beliefs that we must exercise.

That’s why SFL organized a national Day of Service, because it was our responsibility.

And we’re not alone – the United States itself is the ​most charitable country in the world​. As that report indicates, Americans don’t give more just because they may be taxed less than they would in other developed nations. They give more because it’s apart of who we are – shedding light on problems in our communities, organizing to fix them, and creating opportunities for others. That’s the American dream.

Students For Liberty strives to embody that philosophy not just in the United States, but internationally. With young libertarian activists, business people, writers, and more in every corner of the globe, SFL educates and empowers people on the ideas liberty. We’ll be hosting more service-oriented events in the coming months, with an even greater international reach.

In order to achieve the freer tomorrow that we hope for, us libertarians have to walk the walk. It’s part of who we are.

Matthew Boyer is the Media Relations Associate with Students For Liberty and a Policy Analyst for the Consumer Choice Center.